In my post on modeling the Kansas economy, Rick Stryker takes me to task for modeling the Palmer Drought Severity Index (PDSI) for Kansas as an I(1) process: 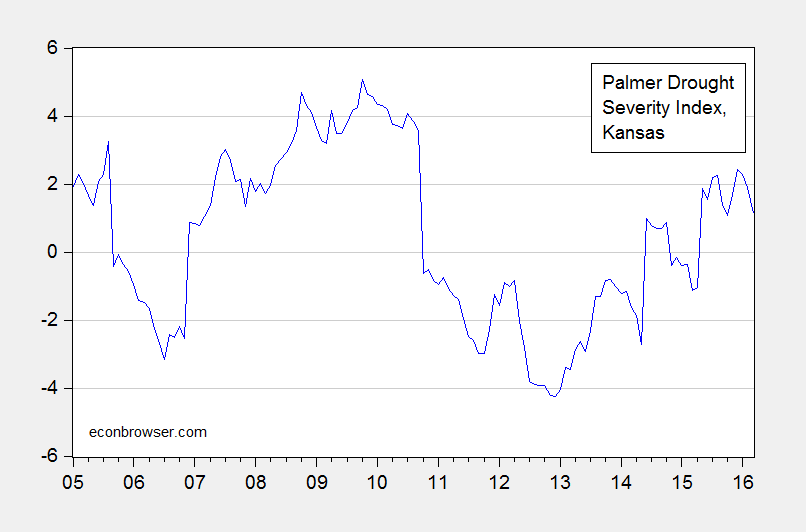 Since proper accounting for unit roots is critical for obtaining proper inferences time series econometrics, I think it’s of some importance to highlight why taking the “Stryker view” is ill-advised. I turn to Dave Giles Econometrics Beat for support. From “Snakes in a Room”:

The other day my wife was in the room while I was on the ‘phone explaining to someone why we often like to apply BOTH the ADF test and the KPSS test when we’re trying to ascertain whether a partcular time-series is stationary or non-stationary. (More specifically, whether it is I(0) or I(1).) The conversation was, not surprisingly, relatively technical in nature.

… a useful analogy that one might use in this particular instance.

First, though, here’s a brief summary of the technical issue(s).

Now, here’s my analogy. Suppose we have a dimly lit room with two windows, and in that room there are some snakes. They may be a completely harmless ones, or they may be deadly. Before entering the room, we’d like to try and figure what sort they are!

I take a flashlight, shine it in one window, and try to decide what I’m facing. I could go ahead on the basis of what I see through the one window using one flashlight and take a chance. Or, I could go around to the other window, perhaps use a different flashlight, and see what I can conclude from that different perspective.

If I come to the same conclusion about the nature of the snakes, whichever window and flashlight I use, then I may feel much better informed and prepared when I enter the room than if I come to diferent conclusions from the two viewings.

Wouldn’t you want to look through both windows before proceeding?

Over the 2005-2016Q1 period (used in the analysis), the Kansas PDSI fails to reject the unit root null in the Elliott-Rothenberg-Stock Dickey-Fuller test (constant, trend) at the 10% msl using EViews default settings/Bartlett window. It fails to reject the Kwiatkowski-Phillips-Schmidt-Shin trend stationary null at the 10% msl, using EViews default settings.

Interestingly, using monthly data, the KPSS test does reject at the 10% msl, but still fails to reject the ERS DF test at 10% msl.

So, for me, here are the takeaways:

Because of the potential specification error problems, cointegration is not the first choice of many time series experts.

All I can say is, the term “many time series experts” reminds me of the phrase “some people believe” from the show “Ancient Aliens”. Sure, if all one is interested in is short run relationships, then first differenced data will obviate the need to deal with issues of cointegration. But if one wants to find the long run impact of money on the price level…

5 thoughts on “The Kansas Palmer Drought Severity Index, Unit Roots, and Snakes in a Room”