Today we are pleased to present a guest contribution written by Geert Bekaert (Columbia University) and Arnaud Mehl (ECB). This post is based on the paper by of the same title. The views expressed are those of the authors and do not necessarily reflect those of the ECB or the Eurosystem.

Financial globalization was a salient phenomenon of the past three decades. But since the global financial crisis of 2007-09 there is a heated debate as to whether it could be going into reverse. The picture emerging from quantity-based measures of global financial integration is gloomy (See e.g. Bussière, Schmidt and Valla (2016), Van Rijckeghem and Weder di Mauro (2014), Pasricha et al. (2015)). Gross external assets relative to world output have flattened out. Global capital flows are down to half their pre-crisis levels. Global banks have increased domestic lending faster than foreign lending. And emerging markets are reintroducing capital controls.

The measure we propose captures equity market integration for 17 countries back to the first era of financial globalization prior to World War I. The key strengths of our measure are that it describes integration at relatively high monthly frequencies; captures de facto, and not simply de jure, integration, and that it provides a framework to test formally for the various shapes of the temporal pattern of integration hypothesized in earlier literature. We can also use our measure to distinguish global from regional patterns of integration and to uncover the economic sources of financial integration, both at the global and regional level.

The measure employs conditional betas of a country’s stock return with respect to global and regional equity market returns. Betas provide an economically meaningful measurement of the sensitivity of a country’s equity market to global and regional shocks. Moreover, they do not suffer from the volatility bias plaguing simple correlation statistics.

With the integration measure at hand, we first characterize how integration has evolved between 1885 and 2014. Global financial market integration follows a “swoosh” shape (i.e. the trademark logo of a famous athletic shoe and clothing manufacturer). In other words, global financial integration was high pre-1913, still higher post-1990, and low in the interwar period (see Figure 1). In fact, we statistically reject the presence of other shapes hypothesized in earlier literature, such as a flat line, a U shape, a J shape, but cannot reject this distinct “swoosh” pattern. We find no evidence of financial globalization reversing since the Great Recession as claimed in other recent studies. The extent of global financial integration varies over time, primarily with de jure market integration and global growth uncertainty. 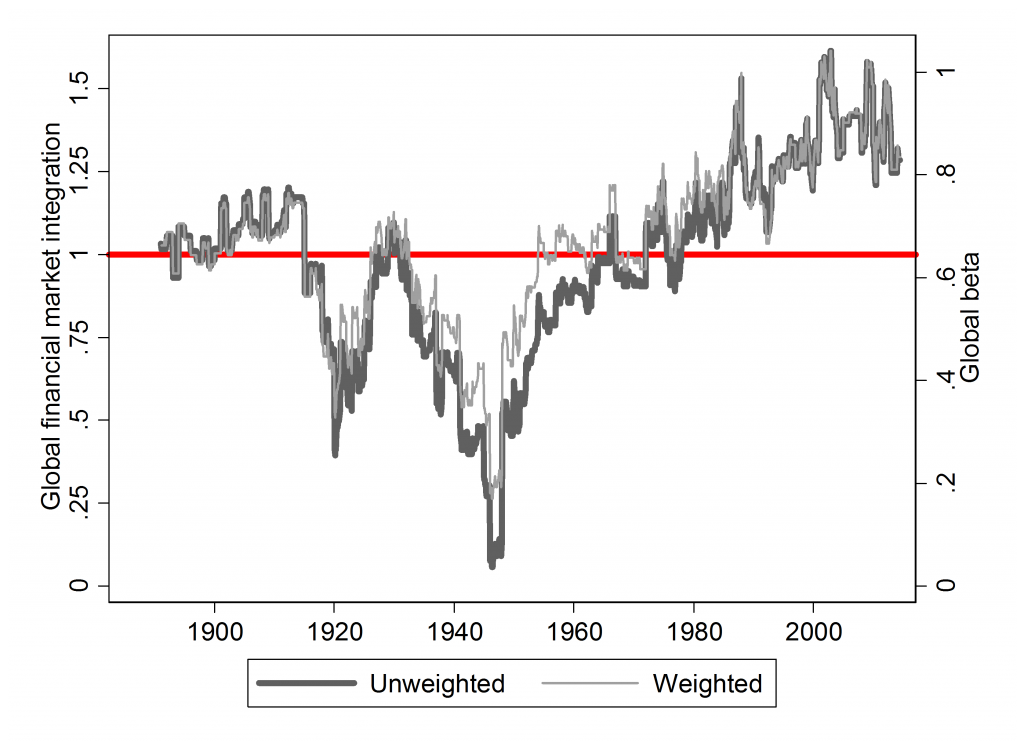 Our results have implications for the recent debate on the trilemma hypothesis, which posits that a country can only run two of the three following policies: open capital markets, an independent monetary policy and a pegged exchange rate (See e.g. Obstfeld, Shambaugh and Taylor (2005) for a review and earlier historical evidence). We investigate the role of de facto global financial market integration and the exchange rate regime on monetary policy independence measured by the sensitivity of local interest rate changes to international base rate changes, using both short and long-term interest rates. We also investigate whether the trilemma has recently morphed into a dilemma due to global financial cycles (See e.g. Rey (2013) and Obstfeld (2015) for a discussion).

Importantly, we can document how interest pass-through has evolved between 1885 and 2014. Figure 2 shows the evolution of average pass-through from base to long-term interest rates for peggers and nonpeggers obtained from our estimates. Pass-through for peggers follows a nice swoosh shape, which largely reflects the temporal pattern of global financial market integration over the last century. In contrast, pass-through for nonpeggers is stable over time. Importantly, it remains appreciably higher for peggers than for nonpeggers in the recent period at about 70% vs. 45%, respectively. This suggests that central banks outside the U.S. still exert more control over their domestic short-term interest rates in the presence of flexible exchange rates, which can act as a shock absorber, despite the potential existence of global financial cycles set in motion by US monetary policy impulses.

Overall, the trilemma is alive and well and has not morphed into a dilemma as recent papers claim, although it is natural to witness larger pass-through in more globalized markets.

Bekaert, Geert and Arnaud Mehl (2017), “On the Global Financial Market Integration ‘Swoosh’ and the Trilemma,” NBER Working Paper, No. 23124.

Van Rijckeghem, Caroline, and Beatrice Weder di Mauro (2014), “Deglobalization of Banking: The World is Getting Smaller,” CEPR Discussion Paper, No. 10139.

This post written by Geert Bekaert and Arnaud Mehl

1 thought on “Guest Contribution: “On the Global Financial Market Integration “Swoosh” and the Trilemma””