Although the U.S. economy is in its eighth year of expansion since the Great Recession, some states are nevertheless in recession. The timing of states entering an economic downturn often differs from the nation as a whole: the onset and duration of recessions depend on factors that typically differ in each business cycle. A global recession such as the Great Recession is often widespread, dampening economic growth across most regions and sectors of the United States. But other downturns may be more concentrated.

States with higher concentrations in specific sectors may enter downturns earlier than other states—and may remain in them longer. For example, energy-producing states in the Tenth Federal Reserve District entered a recession in 2015 and 2016 following the 70 percent decline in the price of oil from June 2014 to February 2016. In contrast, most non-energy-producing states experienced moderate but steady growth over the last two years (Map 1). Energy-producing states have a larger share of employment and output in the oil and gas sector; as a result, declining or sustained low oil prices can decrease exploration and drilling, decrease activity in other sectors, and thereby dampen overall economic activity. 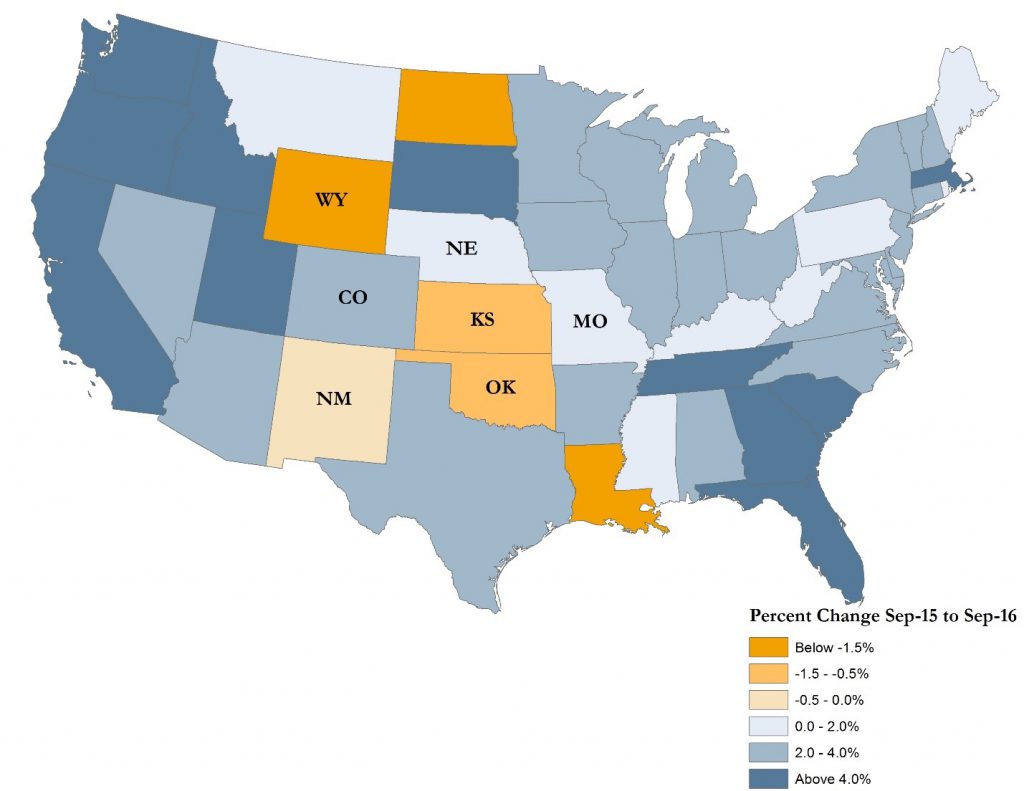 Using changes in each state’s coincident index to measure growth, I implement two approaches to determine whether the seven states of the Tenth District are in a recession.

The first approach I use is the Bry-Boschan method, which is helpful for identifying regional recessions retrospectively over the last four decades. The B-B method simply identifies peaks and troughs in the data series.

The second approach, Hamilton’s Markov regime switching model, is more helpful for identifying state recessions in real time. It allows the average growth rate to switch between different regimes (for example, between a high-growth and low-growth regime). The timing of these regimes and the growth rates within them are then estimated from the data (See the full article for more details on the methods). 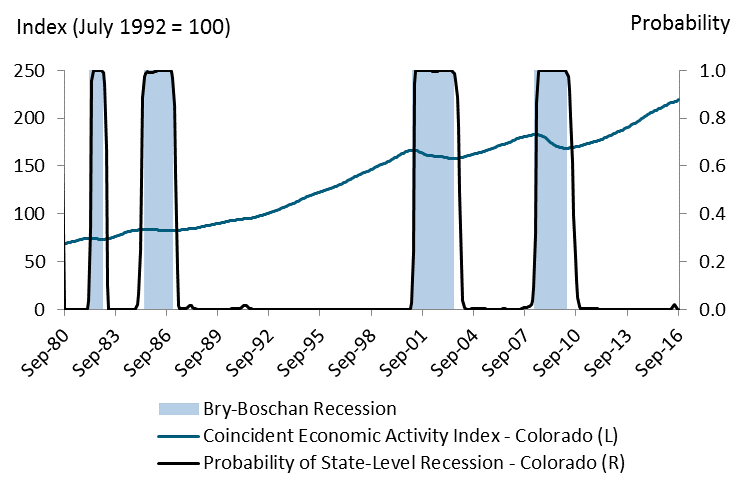 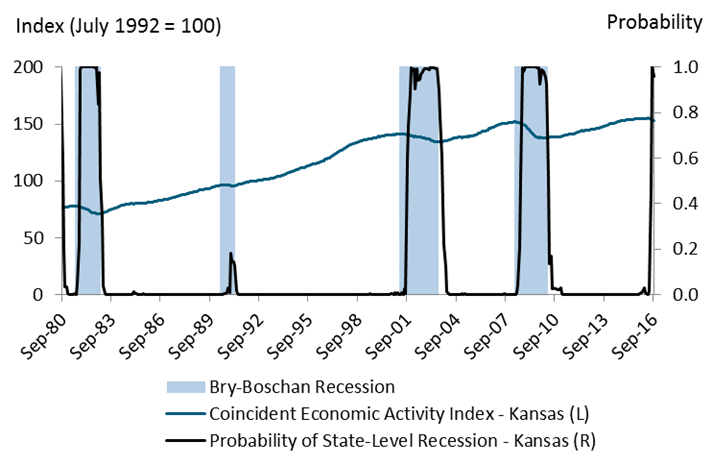 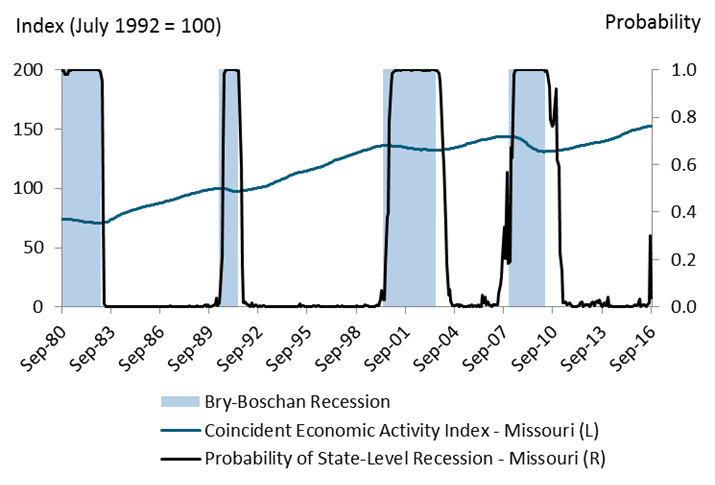 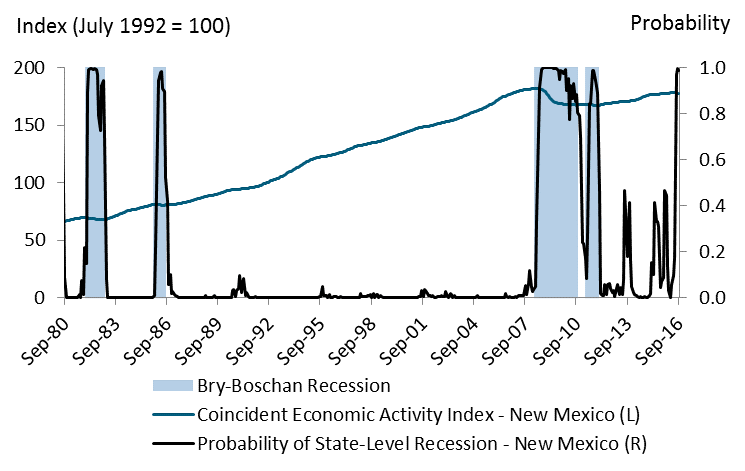 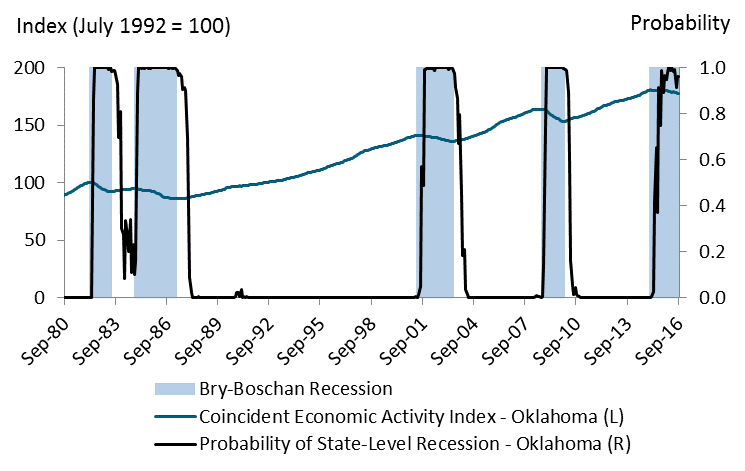 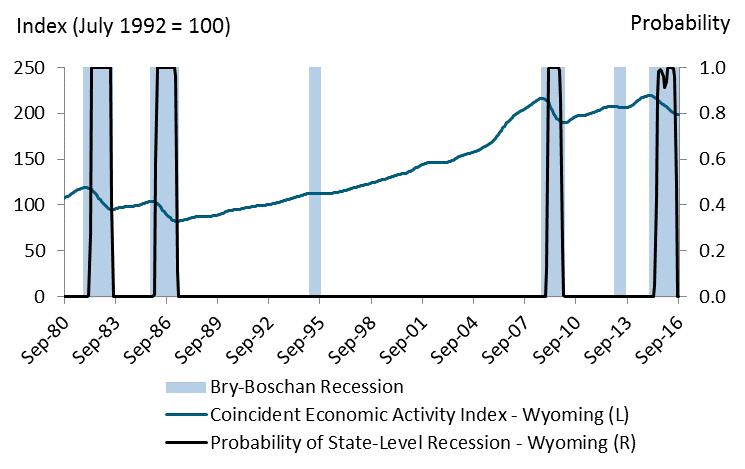 In addition, only the Markov regime-switching model identified the start of recessions in early to mid-2016 in Kansas (second figure in Chart 1) and New Mexico (fifth figure). While there could be numerous causal factors for recent state recessions, changes in oil prices are likely a main driver. Over the past couple of years, the price of oil fell substantially mostly due to changes in expectations of future oil demand relative to available supply (Davig and others). Oil price declines are a plausible explanation for recent recessions in New Mexico, Oklahoma, and Wyoming (given their relative dependence on the oil and gas sector) and may be a contributing factor in Kansas as well. As of September 2016, Kansas, New Mexico, and Oklahoma still appeared to be in recession, with Wyoming possibly exiting in the prior months. It is worth noting, however, that the most recent readings of the coincident index can be subject to (generally small) revisions.