We all know that the CBO has been under assault over the recent scoring of the AHCA (14 million reduction in coverage by 2018, 26 million by 2026; relatively unchanged by recent amendments), with allegations that their previous projections have been “wrong”. I document in this post that CBO macro projections have been comparable to Blue Chip averages, in terms of accuracy (mean bias, RMSE’s). In terms of the issue at hand, here is a graph depicting various vintages of CBO projections of reduction in uninsured. 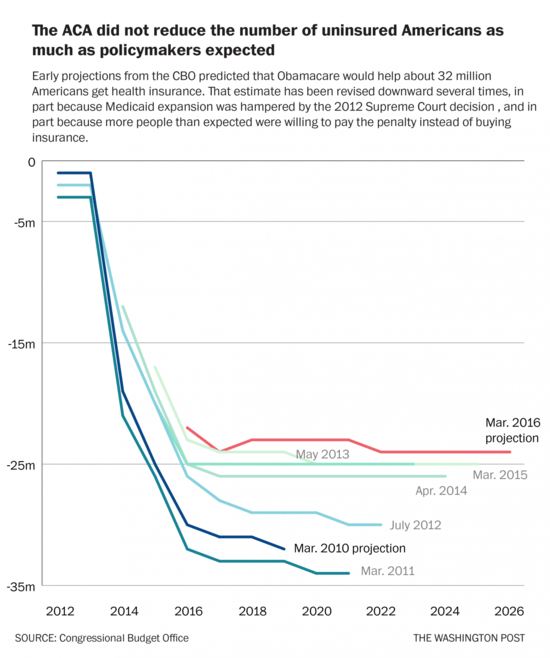 Now, a cursory glance might suggest to the uninformed that indeed the CBO blew it, since as of March 2016, coverage had fallen by about 8 million less than projected in March 2010. However, if one examines the profiles of the various vintages, one sees a big shift between July 2012 and May 2013 vintages. What happened in the intervening period? A hint is the fact that the Supreme Court decision striking down the requirement for Medicaid expansion occurred June 28, 2012. By May 2013, the implications of that event had become clear, with 19 states declining to expand their programs.

The Kaiser Family Foundation estimated that about 4.5 million nonelderly adults would be eligible if these 19 states expanded coverage. Hence, the miss is on the order of 4 million, which is not altogether big given the original estimate of a 32 million reduction in uncovered: 6% in log terms. (Even more impressive when compared against the approximately 246.6 nonelderly covered, in 2015 [1]).

So, in the end, I think the consensus of informed economists is correct: “Adjusting for legal restrictions on what the CBO can assume about future legislation and events, the CBO has historically issued credible forecasts of the effects of both Democratic and Republican legislative proposals.”

4 thoughts on “CBO Projections of Coverage under the ACA”