A couple of days ago, I noted that most indicators showed continued growth. Quarterly Census of Employment and Wages figures released today indicate a slightly softer employment situation at end of 2016 than is represented by the establishment series. 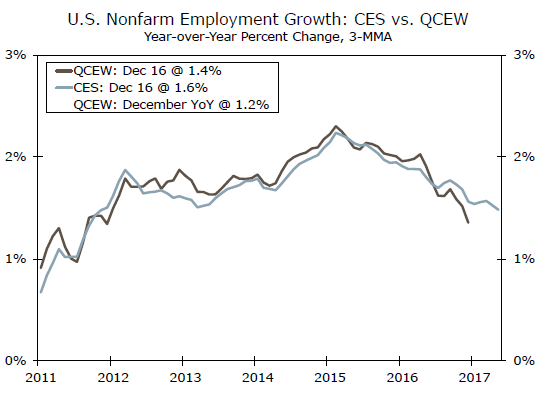 The Quarterly Census of Employment and Wages (QCEW) is a detailed count of employment and wages derived from the unemployment insurance tax rolls and serve as the basis for the annual revisions to the monthly employment series. The latest data, which are available through December, show hiring slowed a bit more abruptly than previously thought during the second half of last year. The fourth quarter QCEW data show year-to-year job growth slowing to just 1.2 percent at year-end 2016, or some 0.3 percentage points less than the monthly establishment payroll series. Moreover, the QCEW data show the pace of job growth decelerating more sharply during the second half of last year and shed new light on the slowdown in nonfarm payroll growth over the past three months, which has seen the average gain in nonfarm employment slow to just 120,700 jobs per month. The QCEW series also provide new insights into the lack of wage growth.

15 thoughts on “Employment Situation: Maybe a Little Softer than I Thought”