Remember when critics wailed about the high cost/per job saved and low multipliers likely under the American Recovery and Reinvestment Act? The same set of people do not seem very bothered at all by the relatively small implied output impact of the TCJA produced by any of the reasonable modelers.

First consider the implied deviation from baseline, using the Penn Wharton Budget Model as implemented by the Tax Policy Center: 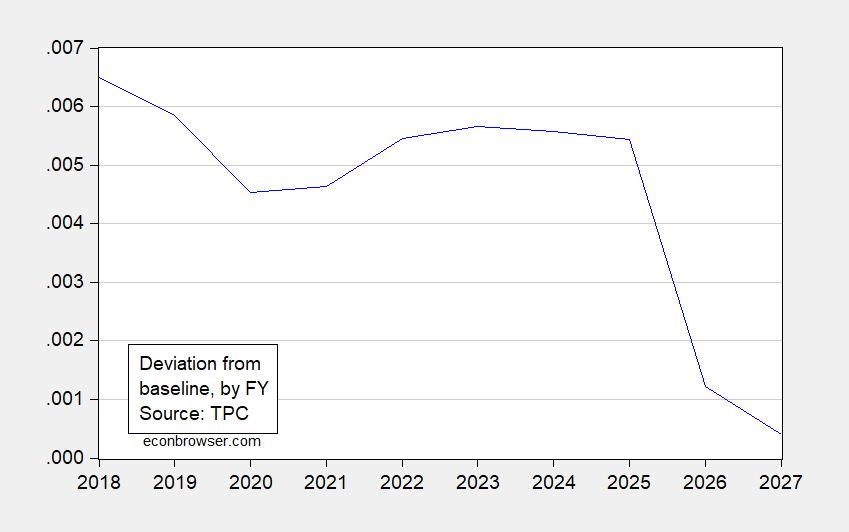 Note that by 2027, the impact is essentially zero.

One can calculate the year-by-year implied multiplier — that is the output increase associated with tax cuts by fiscal year. This is shown in Figure 2. 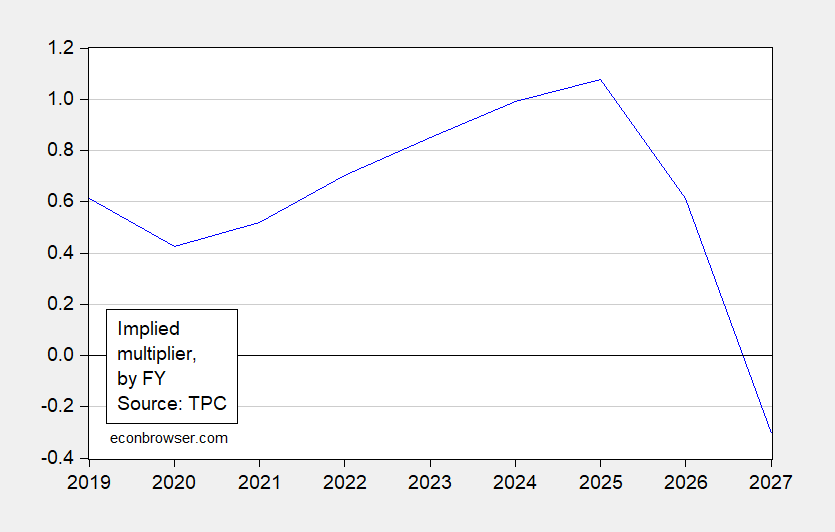 This calculation doesn’t take into account leads and lags in output impact (after all, in a dynamic model, output changes at time t+k in response to measures at time t should occur). Assuming most of the effects take place within the ten year period under study, then one can calculate an average multiplier – in this case 0.6. Each dollar in tax cuts (taking into account feedback effects) increases output by 0.6 dollars. (One can compare against ranges of standard estimates of multipliers used by CBO here).

Goldman-Sachs (Hatzius, December 10) estimates that the impact of the tax bill is a 0.25 ppt acceleration of GDP growth relative to baseline in 2018 and 2019, then tailing off to zero. News accounts suggest the Fed does not perceive a rapid acceleration in growth in response to the implementation of the tax package either.

The relatively small effect estimated by GS is due in part to the belief that the Fed will offset the stimulative effect given we are near full-employment. An alternative perspective is that there are asymmetries in the supply curve. In any case, the empirical evidence for big effects at or above full employment is limited.

Even if the economy falls into recession (the ten year-three month Treasury spread has fallen by 30 bps in the last seven weeks), this package will be a lousy stimulus package, given its construction (giving big tax breaks to high income households that have low marginal propensity to consume is unlikely to boost consumption and hence aggregate demand substantially.)

By the way, using Tax Foundation’s exuberantly optimistic projections, the cost per job-year created will be about $169,000, if I’ve done my math correctly (as opposed to the example here). Of course, if a more plausible employment effect is 1/10 or so of this (as is the growth rate projected by TPC vs. Tax Foundation), then the cost is about $1.7 million per job.

38 thoughts on “Views on Fiscal Stimulus Then and Now”