Today, we present a guest post written by Jeffrey Frankel, Harpel Professor at Harvard’s Kennedy School of Government, and formerly a member of the White House Council of Economic Advisers. This is an extended version of a column that appeared at Project Syndicate. 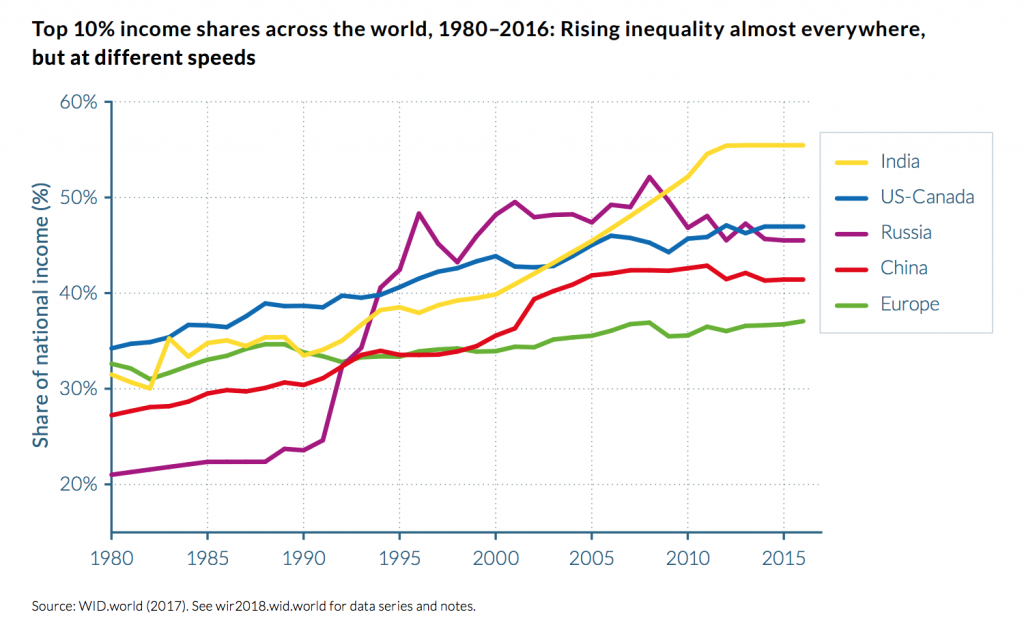 Inequality has been on the rise within the United States and other advanced countries since the 1980s and especially since the turn of the century. The possibility that trade is responsible for the widening gap between the rich and the rest of the population has of course become a major political preoccupation.

This long-standing debate can be illuminated by the latest international statistics on income distribution brought to us by the World Inequality Report 2018, released recently as the first annual installment of an effort coordinated by renowned researchers Thomas Piketty and Emmanuel Saez. The numbers from the World Inequality Database (WID) reinforce a number of important points.

First, the increase in inequality in the United States — which began in the 1980s and accelerated after the turn of the century – continues, by any measure. Most of GDP gains have gone to the rich. For example, although the share of national income going to the top 1% of the American population was only 11 % in 1980, having declined strongly since the “Roaring ‘20s”, that share had risen back to 20% by 2014. It is far above the slice of the national pie going to the entire bottom half of the population (which is only 13%).

Second, there are qualitatively similar post-1980 trends in such other major countries as Canada, UK, France, and Germany, though not as pronounced as in the US.

Measures of globalization such as the ratio of trade to GDP also began rising rapidly in the 1980s, fueling widespread suspicions that there is a causal connection between the two trends. More on this theory below. But there are reasons to doubt it. One is that the global ratio of trade to GDP, after climbing for 35 years, peaked in 2008 [at 61%] and then fell [to 56% in 2016]. In other words, political fears of globalization have risen to a fever pitch during precisely the same period when the trend has halted.

Many economists have argued that other factors are more important than trade in explaining the fate of the left-behind worker. High on the list of likely explanations for the observed widening gap between skilled and unskilled workers is technological progress that raises the demand for skilled workers relative to unskilled workers, together with a lagging supply of skilled workers coming through the education pipeline. Another possible explanation is the increasingly winner-take-all nature of many professions.

When I first started studying economics in the 1970s, the reigning theory of international trade was the neoclassical Heckscher-Ohlin-Stolper-Samuelson model (HO-SS). It emphasized the distinction between workers and those who possess physical or financial capital and/or human capital (e.g., a college education, or “skills”, for short). The HO-SS theory contained the prediction that international trade would benefit the abundant factor of production, which in rich countries meant the owners of capital, and would hurt the scarce factor of production, which in rich countries meant unskilled labor. This was a surprise if one was accustomed to the classical Smith-Ricardo model, Trade Theory #1. But, then, the classical theory couldn’t address the question of income distribution because it treated all of a country’s citizens as if they were the same, making no distinction between workers and capitalists. The intuition behind Trade Theory #2, HO-SS, was not hard to grasp: workers could command a higher wage if they did not have to compete against the abundant supply of unskilled labor in other countries.

Then came the post-1980 revolutions in trade theory. Paul Krugman (1980) and Elhanan Helpman (1985) made the trade models much more realistic by introducing the previously neglected elements of imperfect competition and increasing returns to scale (Model #3, called the “new trade theory”). Later, Marc Melitz (2003) focused on how trade could shift resources from low-productivity firms to high-productivity firms (in what was called the “new-new trade theory,” Model #4).

The little-noticed irony is that the HO-SS theory was eclipsed just at the start of the period during which its prediction seemed to come true, that trade between rich and poor countries might hurt unskilled workers in the former. Anti-globalization thinkers and the journalists who reported on them were eager to claim that the newest economic theories required a rethinking of the traditional case for free trade. (Remember “strategic trade policy”?) They missed the point that the HO-SS or neoclassical theory predicted that global free trade would be bad for workers in rich countries while the new theory did not.

Perhaps it is not too late. Does neoclassical trade theory explain widening inequality in the US and other rich countries? Or are factors like technological change and education more important?

Just as the HO-SS theory implies that trade will widen the gap between unskilled workers and those with human and other capital in rich countries, it also predicts that trade will narrow the gap in countries that have the most unskilled workers. Their services will be in greater demand in an integrated world market. Pinelopi Goldberg and Nina Pavcnik (2007) found that this prediction of the HO-SS theory was not borne out: “while globalization was expected to help the less skilled who are presumed to be the locally relatively abundant factor in developing counties, there is overwhelming evidence that those are generally not better off, at least not relative to workers with higher skill or education levels.” Milanovic and Squire (2007) also found that tariff reduction is associated with higher inequality in poor countries.

The latest numbers suggest that this continues to be the case. In fast-growing emerging market countries, the greatest gains have gone to those at the top. Consider the five BRICs, for which WID data are available. In China the share of income going to the upper one percent of the population reached 14% in 2015, up from 6% in 1978. In South Africa the share has reached 19% [in 2012], up from 9% in 1987. Russia, shows an even bigger increase, to 20% [in 2015], up from 4% in 1980. India shows 22% [in 2013], up steadily from 6% in 1982. In Brazil the upper one percent receives 25% of national income the biggest share of all five (though the Mideast is worse, and Brazil’s rate of change is low). Similar trends appear in each country for the share of the upper 10%.

This does not mean that HO-SS forces are irrelevant. (There is evidence for them in the incomes of rural versus urban areas within Chinese districts. Another study found that when Mexico opened up to trade, the fraction of workers in poverty fell in those states most exposed to trade.) But other forces seem to be dominating the trend in income distribution. Technological progress in favor of skilled workers, such as automation, seems to be a major factor everywhere. The trend toward winner-take-all labor markets may play a role as well. Naturally government distribution policy is also a major factor: the after-tax income distribution is smoother in Europe than the pre-tax income distribution, to a much greater extent than in the US.

Whatever it is that continues to increase inequality in so many parts of the world, trade does not seem to be the major explanation.

29 thoughts on “Guest Contribution: “Trade and Inequality Within Countries””