Justin Fox has a excellent discussion on the problems in conveying trends in real activity in relative terms when the real magnitudes are expressed in chain weighted terms.

Chain indexing updates the prices used to calculate real output every year, rendering the choice of base year much less important and allowing for meaningful real GDP comparisons over periods of many decades.

This had a side effect, too, though. For reasons that I’m not going to get into here but that you can read all about in Whelan’s 2000 paper, “A Guide to the Use of Chain Aggregated NIPA Data,” the different components of real GDP can no longer be added together. That is, they can be added together but, except in the base year, they don’t add up to real GDP. As time goes by, the sum of the different parts of real GDP gets bigger and bigger relative to the real GDP total. So calculating manufacturing’s share of real GDP over periods of decades generates percentages that are effectively nonsense. 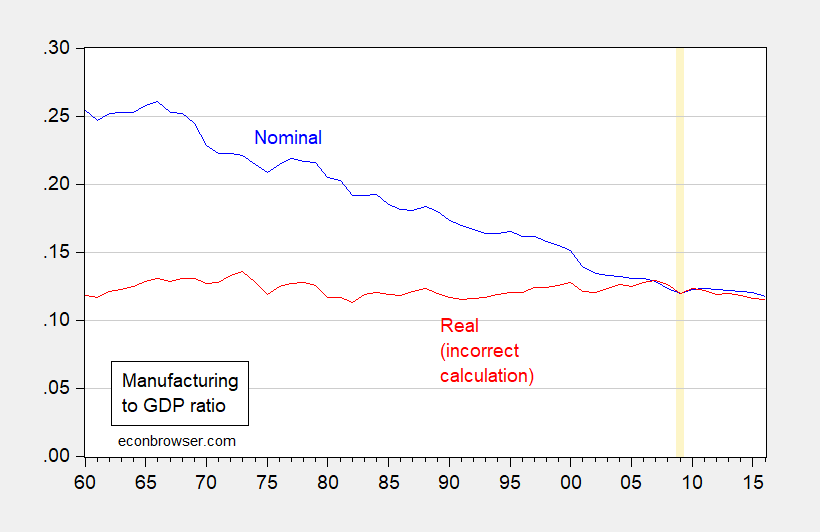 Given the rapid decline in manufacturing prices — driven in no small part in the 1970’s through 1990’s by the rapid pace of computing power in information technology — the nominal share falls while the real does not markedly.

As Fox notes, the real ratio is not a correct calculation because the sum of chain weighted real magnitudes does not equal the chain weighted real aggregate, unless relative prices remain unchanged. What is a legitimate calculation is to take log of the ratio, which when expressed relative to a base year value, is a ratio of a cumulative percentage changes. This series, compared to the incorrect calculation, is shown in dark blue in Figure 2. 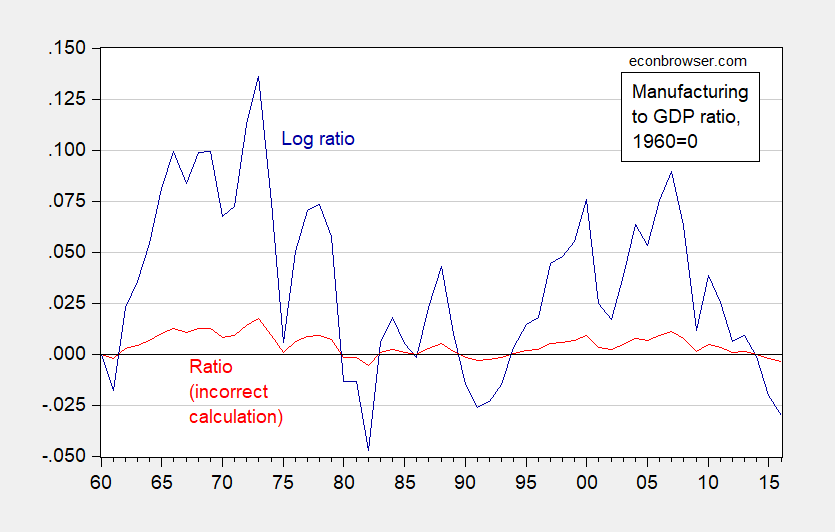 When the log ratio falls below the starting value, then the real manufacturing growth has cumulatively fallen short of cumulative GDP growth, so that manufacturing in this sense is less important than it was initially, starting most recently in 2014.

For those who want another way of depicting whether manufacturing has grown in proportion to overall GDP, one can check on the cumulative contributions to growth, and whether the cumulative proportion moves in line with the ratio at the starting point. This calculation is shown in Figure 3. 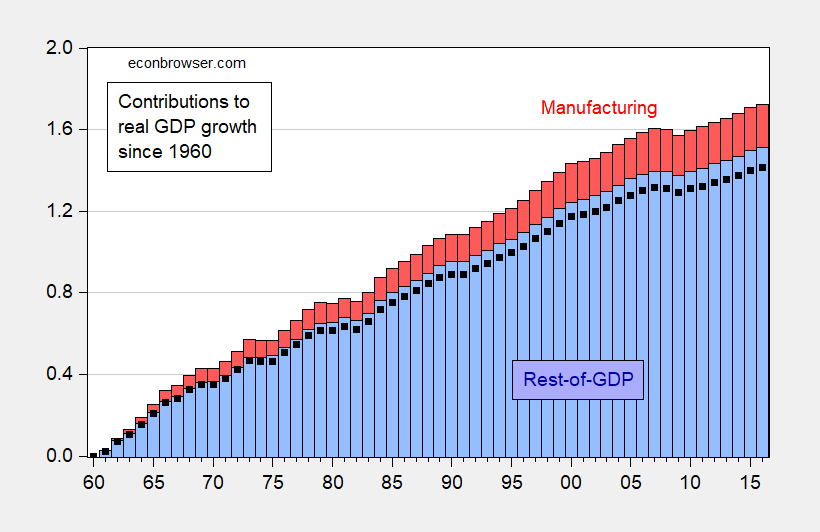 Figure 3: Cumulative contribution to GDP from manufacturing (blue red bar) and from rest-of-GDP (red blue bar) since 1960, and implied share for rest-of-GDP if manufacturing growth was in proportion to that in 1960 (black squares). Source: BEA, author’s calculations.

The fact the black squares are lower than the heighth of the blue bars indicates that manufacturing has declined as a share of economic activity. This approach constitutes an approximation, because the calculation of manufacturing contributions to growth involves dividing the change in real manufacturing output by lagged output (exactly analogous to Table 4 in this release).

So, there are a variety of ways to show how real sectoral activity has declined relative to overall real activity (I prefer log ratios) — but Justin is overall right: Friends don’t let friends calculate shares of real GDP.

Note this specific problem of real components not adding up to a real total occurs with chain weighted indices. If fixed weight real measures are being analyzed, then the adding up/dividing issue does not typically arise.