Once again, is economic policy uncertainty (EPU) as measured by the Baker, Bloom and Davis news index, elevated during the Trump era?

The simplest is to compare the observation for March 2018 to the sample average. A time series of EPU is useful.

The March 2018 observation is over one standard deviation away from both the mean and median, so that observation is not particularly likely to be observed in this distribution. The histogram indicates that the series is non-Normally distributed, so more careful analysis is in order.

One might want to know if the average value is higher during the Trump period as opposed to other presidential administrations. One could run an OLS regression of EPU on dummies for presidential terms. OLS is BLUE if the errors are Normal. However, if they are not, then alternative methods come to mind.

One alternative estimation method that might be better is robust regression (Huber) which downweights outliers (suggested by the highly non-Normal distribution displayed in Figure 2). This approach essentially predicts conditional medians. Now, I include dummies for presidents. Since Reagan is omitted, the constant pertains to the conditional mean for the Reagan administrations. 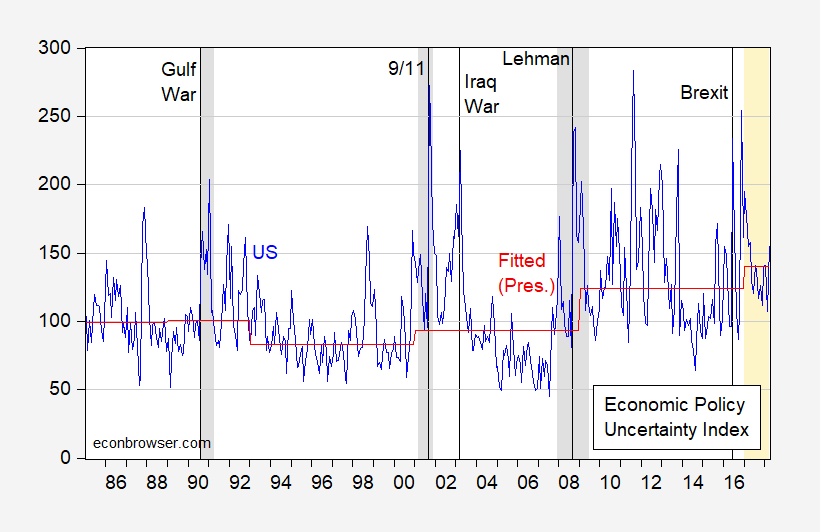 Is uncertainty higher than during the Obama period? An F-test for equality of the OBAMA and TRUMP dummies rejects at the 7.7% significance level. So, the answer is yes.

Finally, one can estimate a relationship conditional on presidents and exogenous events like 9/11. That regression answers the question of whether uncertainty during Trump is higher than what is to be expected conditional on various factors. The robust regression results are: 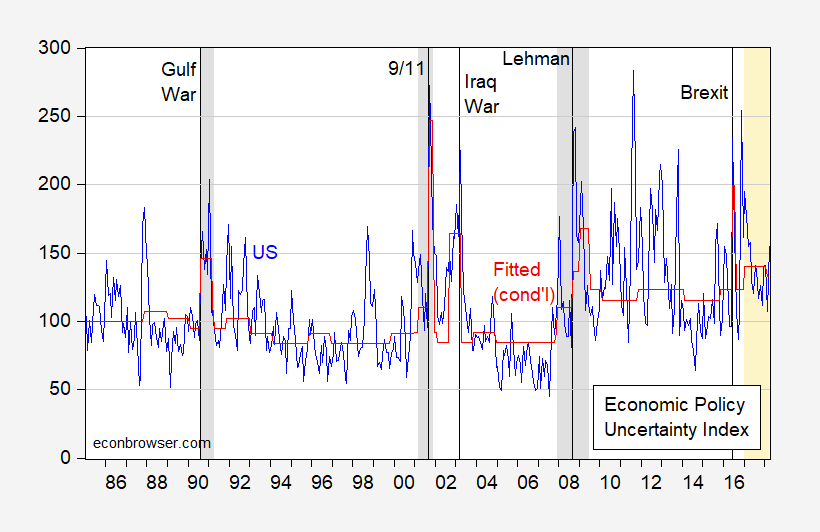 Now, as compared to OLS, it’s a little harder to interpret the results from robust regressions (as they pertain in this case to changes in conditional medians rather than means). Instead of running robust regression, one could log the dependent variable, and re-estimate using OLS, and see if the residuals are more Normal. The corresponding results are:

The interpretation of this regression is that uncertainty is 31% higher during Trump than Reagan, controlling for exogenous factors and recession. Given the log-linear specification, we can say that uncertainty under Trump is 12% higher (in log terms) than under Obama, after controlling for divided government, Brexit and recession, as well as the election. The fit is shown below, as is a histogram of the residuals. 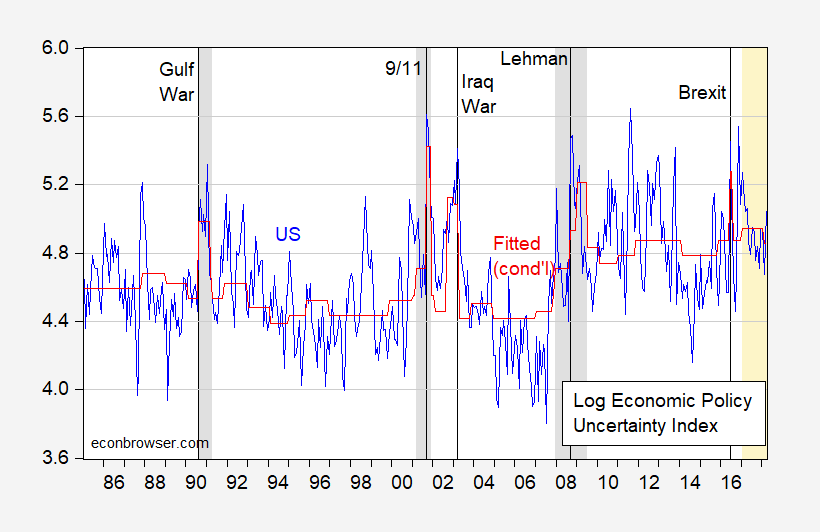 Note that one can’t reject the null hypothesis of Normality of residuals at the 5% MSL.

Ed Hanson has asserted that uncertainty under Trump is no higher than it was in 7 of the last 9 years, and focuses in particular 2008-13. If I select that period, it’s true uncertainty doesn’t look particularly high. But on can arbitrarily select particular periods to compare against in order to not find a difference. In order to guard against that arbitrariness, I compare against the last decade. To do that, I estimate the preceding equation, constraining all presidential dummies to be zero except for TRUMP, and defining a dummy variable LASTDECADE which takes on a value of 1 from 2008M04-2018M03 This leads to the following OLS regression results.

These results indicate that compared to the last decade, after conditioning, average uncertainty under Trump has been 14.2% higher. The fitted values are shown in Figure 7. 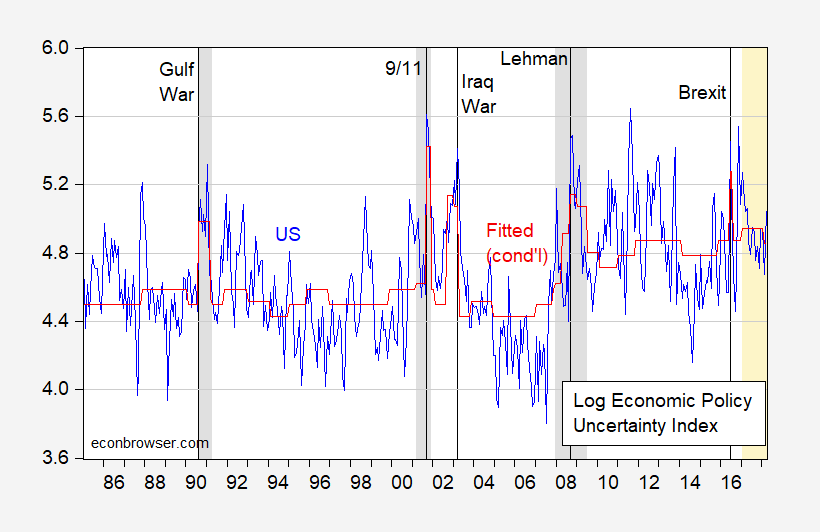 Since the TRUMP coefficient is 0.142, this means that the Trump period has been characterized by 14.2% higher uncertainty than over the past decade. So for me, economic policy uncertainty is elevated during the Trump administration, as compared to earlier periods, conditioning on elections, recessions, and exogenous events.

Data here (except for LASTDECADE variable).

79 thoughts on “A Dummies Approach to Trumpian Uncertainty”