[T]he current Monthly EPU is at an elevated level, but it has been at this elevated level 7 out of the past 9 years. The elevated value is better described as normal for about the last decade.

And his concluding admonishment:

I still believe that economic policy uncertainty as measured by the news based index (which Ed Hanson was discussing) is elevated. 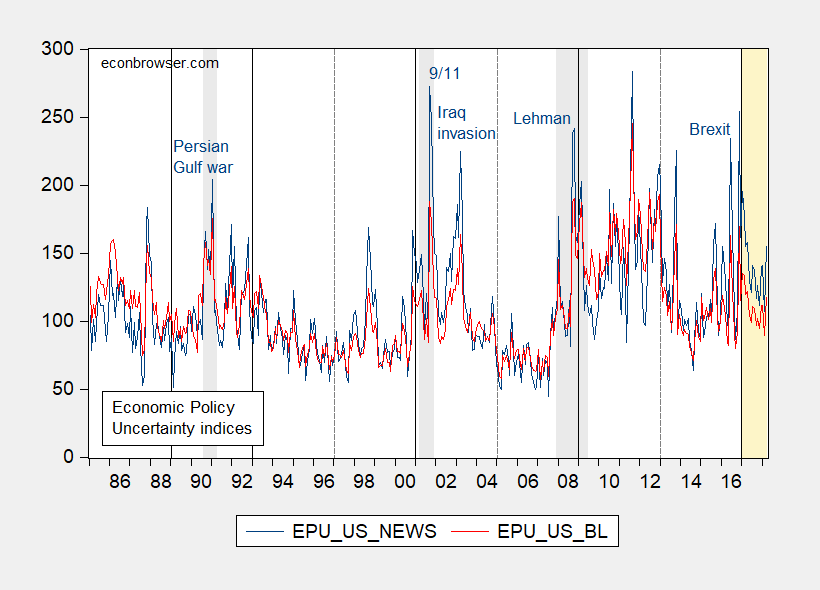 What does a formal analysis convey? The results depend on which index is used. I rely on the news-based series, since this is the focus of Baker, Bloom and Davis’s more recent work (Quarterly Journal of Economics, 2016). This series is also the series displayed on the policyuncertainty.com frontpage.

Since the distribution of the EPU variable seemed highly non-Normal (as did that of the residuals from the above regression, see histogram in this post), I used robust regression (essentially predicting median values instead of mean). This yielded:

The baseline index, which incorporated uncertainty regarding the expiration of tax code provisions, and forecaster disagreement, yields different results than the news-based series (which is comparable across countries). With weight on forecaster disagreement (sure to be high during the great recession) and uncertainty regarding tax code provisions (due to the stimulus package and conflict between the executive and legislative branches during the Obama-Boehner years), the Obama and Trump coefficients re-arrange so that Trump era uncertainty looks less elevated. The baseline index results are sensitive to the inclusion of time trend. (They are also sensitive to inclusion of a quantitative easing dummy variable, which takes on a value of 1 from 2008M11-2014M10; then TRUMP and OBAMA take on similar coefficients).

The data are here. The output is here.

I conclude that Trump is indeed really special, when it comes to policy uncertainty.