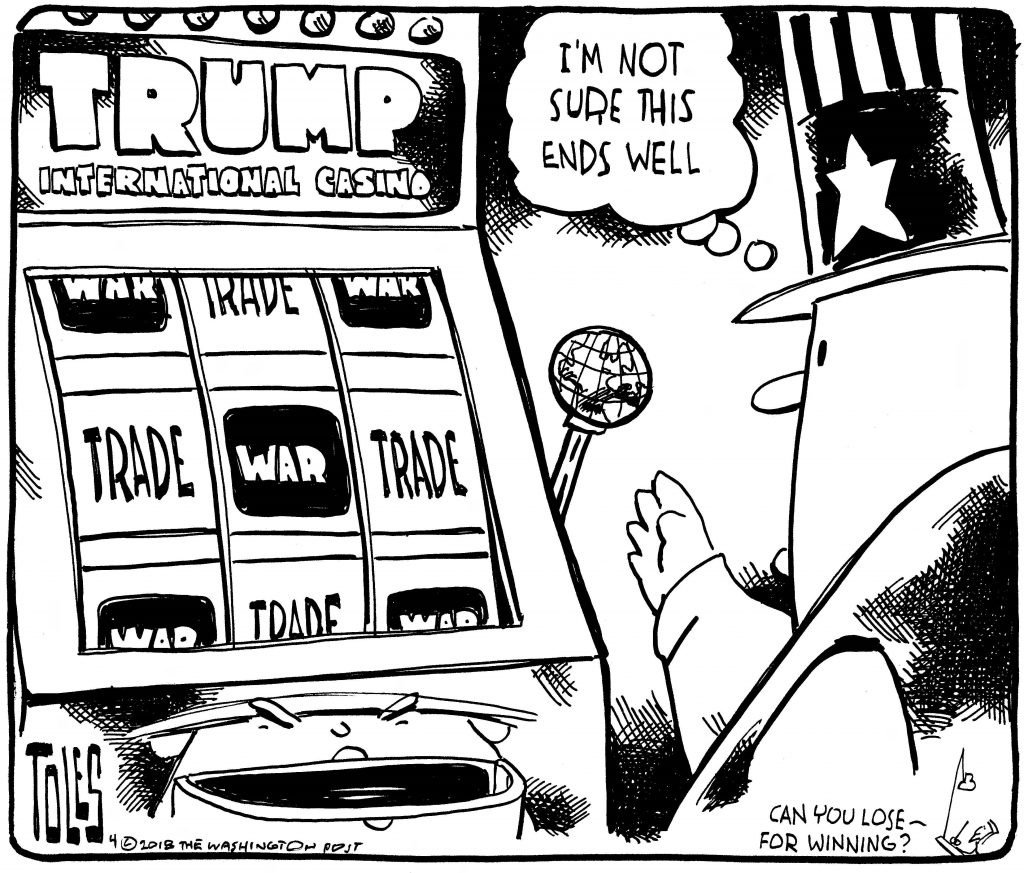 The question we should be asking (prompted by my thinking about the relevance of game theory) is which payoff matrix is of relevance. Here, it makes sense to differentiate between the objectives of Mr. Trump and the United States as a whole.

Surely, this is not an exhaustive list, but I think it covers a lot of possibilities.

It is useful to then consider the efficacy of (i) anti-dumping duties, (ii) Section 232 tariffs, and (iii) Section 301 tariffs in the context of these objectives, keeping in the mind the targeting principle — the core idea of which “is that if a new regulation of some sort is required, the most efficient intervention targets the specific variable of direct interest.”

Hence, if (1) is the objective, then strict implementation of the CFIUS process, augmented by perhaps additional legislation (and funding), combined with increased expenditures in civilian and military R&D, tax breaks for R&D, and increased educational funding aimed at science and technology (including grants for higher educational system) would be in order. I don’t see moves toward the second — perhaps more important aspect — of retaining our technological lead in Mr. Trump’s agenda.

If (3) is the objective, then tariffs and quotas by country will have little impact on the overall trade deficit (since the current account is driven by saving and investment balances), while having a possibly meaningful impact on overall import costs — and at the same time will have some collateral impacts on economic policy uncertainty as the possibility of a global trade war is enhanced. Contractionary fiscal policy (rescinding the TCJA, re-establishing budget caps) would make much more sense.

If (4) is the objective, the fact that it is easy to determine the politically sensitive export sectors vital to the continued Republican control of the legislature means that this is an ill-advised approach for Mr. Trump to take.

If (5) is the objective, then tariffs and quotas aimed at China, Asian countries (including Japan), African countries and Mexico make sense. Tariffs and quotas aimed at Canada do not. Nor do those at the European Union. Note Japan and South Africa were not exempted from the Section 232 sanctions; Canada and Mexico have temporary (conditional) exemptions.

If (6) is the objective, then the tariffs and quotas will have the desired effect (of course, at some cost to domestic parties).

My view is Mr. Trump’s objectives are (5)-(6), mediated by (4). To the extent that the former dominates, we can expect little scope for walk-back, climb-down, de-escalation — pick your preferred phrase. To the extent the latter dominates, Mr. Trump will step back from the brink and declare victory. But don’t expect the national interest concerns to drive the agenda.

(As for Xi’s payoff matrix deviating from China’s, I’m sure there is some difference. However, I’d think the biggest deviation to come from Xi’s willingness to compromise in order to maintain employment vs. political repercussions if he were to lose face by bowing to pressure from the West, or Trump, specifically).