Today, we are fortunate to be able to present a guest contribution written by Steven J. Davis, William H. Abbot Distinguished Service Professor of International Business and Economics at the University of Chicago Booth School of Business and Senior Fellow at the Hoover Institution.

Donald Trump has upended U.S. trade policy. The particulars include a U.S. pullout from the Trans-Pacific Partnership (TPP), threats to jettison the North American Free Trade Agreement, a refusal to affirm new WTO judges, tariff hikes on steel and other goods, frequent rhetorical attacks on major trading partners, and a wrong-headed obsession with bilateral trade deficits.

Trade policy under the Trump administration also has a capricious, back-and-forth character that undermines a rules-based trading order. Less than three months after withdrawing from the TPP, the President said he would consider rejoining for a substantially better deal, only to throw cold water on the idea a few days later. Initially, the administration justified steel tariffs on the laughable grounds that Canada, for example, presents a national security threat. Later, President Trump tweeted that tariffs on Canadian steel were a response to its tariffs on dairy products. Some countries get tariff exemptions, some don’t. Exemptions vary in duration, and they come and go in a head-spinning manner. Two days ago (August 10), the President tweeted that he “just authorized a doubling of Tariffs on Steel and Aluminum with respect to Turkey” for reasons unclear. For a fuller account of tariff to-ing and fro-ing under the Trump administration, see the Peterson Institute’s “Trump Trade War Timeline.”

The rhetorical attacks and capricious nature of the Trumpian approach to tariff policy also invites retaliation. Tit-for-tat tariff hikes between the United States and China are well underway. Canada, Mexico and the European Union have also imposed new tariffs on American imports. Many of the retaliatory tariffs fall on American farmers, prompting the administration to promise up to $12 billion in aid to help farmers cope
with the costs of the President’s trade policy battles.

Needless, added complexity is another feature of Trump administration trade policy. The Department of Commerce has rolled out a slow-working, burdensome process for requesting company-specific exemptions from the new steel and aluminum tariffs, as neatly recounted in a Wall Street Journal editorial:

[C]ompanies must submit a request attesting that their imports aren’t made in the U.S. in “a satisfactory quality” or “sufficient and reasonably available amount.” Companies must state the uses for their steel product, their average annual consumption of the product, as well as the number of days required to take delivery, manufacture and ship the product. They must also estimate the maximum and minimum composition of 24 chemical elements in their products including molybdenum, antimony and vanadium. There are dozens of other queries, but we’ll spare you.

Oh, and a separate request is required for each width, length, grade shape, and form of steel or aluminum product. A single company, Primrose Alloys, has submitted more than 1,200 steel product requests, according to Commerce’s database. All 14 that have been reviewed so far were denied.

Businesses may also submit statements to support their requests, which naturally turn political…

Crony capitalism, political favoritism, and extra sand in the gears of commerce – here we come!

One consequence of all this is a tremendous, Trumpian upsurge in anxiety and uncertainty about trade policy and its economic fallout. Exhibit 1 displays a monthly index of U.S. Trade Policy Uncertainty (TPU) that I developed with Scott Baker and Nick Bloom. It reflects the frequency of articles in American newspapers that discuss economic policy uncertainty and trade policy, in particular. Since Trump’s surprise victory in the November 2016 election, the average TPU index value is up nearly five-fold relative to 2013-15. The full history of the U.S. TPU Index (available from 1985 at PolicyUncertainty.com) shows no other episode of similarly elevated uncertainty, except for the period from 1992 to 1994 due to NAFTA-related concerns. Notes to Exhibit 1: Data downloaded from PolicyUncertainty.com on 10 August 2018. The U.S. series follows “Measuring Economic Policy Uncertainty” by Baker, Bloom and Davis in the Quarterly Journal of Economics, November 2016. The series for Japan follows “Policy Uncertainty in Japan” by Arbatli, Davis, Ito, Miake and Saito, NBER Working Paper No. 23411, May 2017. U.S. data are rescaled to 100 from 1987 to 2015 to match the normalization in the Japanese data.

Exhibit 1 also shows an analogous TPU Index for Japan that I developed with Elif Arbatli, Arata Ito, Naoko Miake and Ikuo Sato. Movements in the two TPU indices are remarkably coherent since Trump’s election. Both countries’ TPU indices surge on Trump’s election win in November 2016, his presidential inauguration and withdrawal from the TPP in January 2017, and the escalation of trade policy tensions since February 2018.

The exhibit supports two conclusions: First, the surge in trade policy uncertainty since November 2016 emanates from a course change in the United States. Second, the U.S. shift is reverberating around the globe.

One question raised by these developments is whether, and how, firms are reassessing their capital investment plans in light of recent tariff hikes and fears of more to come. By raising input costs, domestic tariff hikes undercut the business case for some investments. Of course, tariff hikes might also raise domestic investment in newly protected industries. Retaliatory tariff hikes by trading partners affect domestic investment by curtailing the demand for U.S. exports. An uncertain outlook for trade policy gives firms in all industries a reason to delay investments, while they wait to see how trade policy disputes unfold. The complexity and discretionary nature of tariff exemptions further compounds the uncertainty facing business decision makers.

The monthly Survey of Business Uncertainty (formerly Survey of Business Executives), fielded by the Federal Reserve Bank of Atlanta, offers some evidence on these matters. The SBU elicits information about each firm’s expectations and uncertainty regarding its own future capital expenditures, sales growth, employment, and costs. I developed the SBU in collaboration with Nick Bloom of Stanford and David Altig, Mike Bryant, Brent Meyer and Nick Parker of the Atlanta Fed.

The July 2018 SBU includes the following question: “Have the recently announced tariff hikes or concerns about retaliation caused your firm to re-assess its capital expenditure plans?” Yes, said about one-fifth of our respondents.

As Exhibit 2 shows, the share of firms reassessing their capital expenditure plans because of tariff worries is higher for goods-producing firms than service providers. It’s 30 percent for manufacturers and 28 percent in retail & wholesale trade, transportation and warehousing. In contrast, it’s only 14 percent among all service providers in our sample. These sectoral patterns make sense, given that manufacturing firms, for example, are more engaged in international commerce than most service providers. 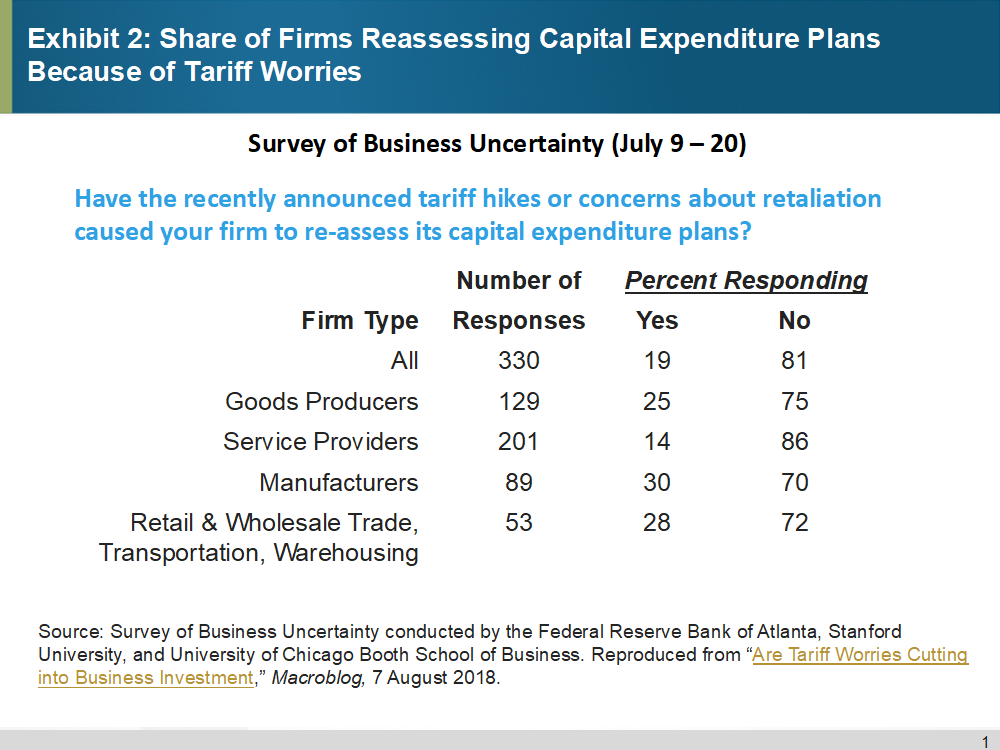 Still, there are sound reasons for concern. First, 30 percent of manufacturing firms report reassessing capital expenditure plans because of tariff worries, and manufacturing is highly capital intensive. So, the investment effects of trade policy frictions are concentrated in a sector that accounts for much of business investment. Second, 12 percent of the firms in our full sample report that they have placed previously planned capital expenditures under review. Thus, the negative effects of tariff worries on U.S. business investment could easily grow.

Third, trade policy tensions between the United States and China have only escalated since our survey went to field. As of July 6, the U.S. began imposing tariffs on $34 billion worth of Chinese imports with another $16 billion scheduled to take effect on August 23. China responded by imposing tariffs on $34 billion in U.S. exports, coupled with threats to slap new tariffs on an additional $16 billion. Responding in turn, the President ordered the U.S. Trade Representative (USTR) to begin the process of imposing a 10 percent tariff on another $200 billion in Chinese imports. China promptly vowed to retaliate. On August 1, the President directed the USTR to consider raising tariffs on $200 billion of Chinese imports from 10 to 25 percent. China responded by threatening additional duties on $60 billion worth of U.S. imports, and warning that it could adopt further countermeasures. These developments suggest that the negative effects of tariffs and tariff worries on U.S. business investment could grow much larger.

What about the effects of Trumpian trade policy uncertainty on business investment in other countries? A recent Reuters survey of Japanese firms offers some evidence. (Many thanks to Arata Ito for alerting me to this survey and for summarizing the results in English. See here for a related article in English.)

The Reuters survey, which went to field from July 2 to 13, includes the following question: How is your firm likely to change its previously planned capital expenditure for the [2018] fiscal year in response to rising trade tensions between the U.S. and China and Europe? 253 large- and medium-sized firms responded.

Three results: First, 24 percent of respondents to the Reuters survey report a wait-and-see stance. That is, they may defer or cut their previously planned capital expenditures for fiscal year 2018 in response to trade policy tensions. Second, the share of firms adopting a wait-and-see stance is larger for manufacturing firms, echoing our finding in the SBU. Third, about half the firms that produce iron and steel, nonferrous metals, textiles, pulp or paper are taking a wait-and-see stance. In short, the survey evidence says that Trumpian trade policy uncertainty also discourages business investment abroad. This type of response in other countries dampens the demand for U.S. exports.

Fortunately, the negative investment effects of Trumpian trade policy uncertainty appear to be modest thus far, and they occur against a backdrop of strong macroeconomic performance – at least in the United States. Under less favorable circumstances, or if trade barriers continue to rise, the Trumpian approach to trade policy has the potential to cause a good deal more economic pain.

In closing, I should note that the harmful consequences of tariff hikes and trade policy uncertainty extend well beyond short-term investment effects. For other critiques of the Trumpian approach to trade policy, see the worthy commentaries by Robert Barro, Alan Blinder, John Cochrane, Doug Irwin, Mary Lovely and Yang Liang, Greg Mankiw and Adam Posen, among others.