Measuring the level of global economic activity is of key interest. But the measures we have on variables like industrial production don’t cover all countries and are only available with a significant lag. Michigan Professor Lutz Kilian suggested in an influential paper published in 2009 that we could get a useful timely indicator by looking at average shipping costs. I recently had a chance to look into the details of how that series is constructed and have some suggested improvements.

Kilian’s basic idea is that changes in world economic activity are the primary driver of the demand for shipping, and that this higher demand shows up in the short run as an increase in the real cost of shipping. Kilian calculated a nominal index of shipping costs (which I’ll denote by x) by starting with a value for 1968:M1 of x = 1 and adding an average of the monthly change in the log of different shipping costs each month to get a new value for xt for each month t up to 2007:M12. Since 2008, Kilian has simply added the monthly change in the log of the Baltic Dry Index (BDI) of shipping costs to the previous month’s value of x. That procedure implies that for data since 2008,

Kilian’s next step was to take the log of x, subtract off the log of the CPI, and regress the difference on a time trend:

The residuals from this second regression are Kilian’s index of real economic activity, which he regularly updates on his website and which have been used in dozens of economic studies.

One can see the consequences of this procedure by substituting the first equation into the second:

Readers of this blog know that I am a big fan of using logarithms in economics. But applying the log operator twice– taking the log of the log– is rarely something we would want to do. One implication of the procedure in the current setting is that the resulting index of real economic activity is a function of the arbitrary value at which the series for x was initialized. When we initialize x for 1968:1 equal to 1 as Kilian did, the value of c0 would be -5.236. If we instead set x for 1973:1 equal to 1, the value of c0 would be -5.694. The next graph shows how different the resulting series would be if we chose one or the other of these seemingly harmless normalizations. 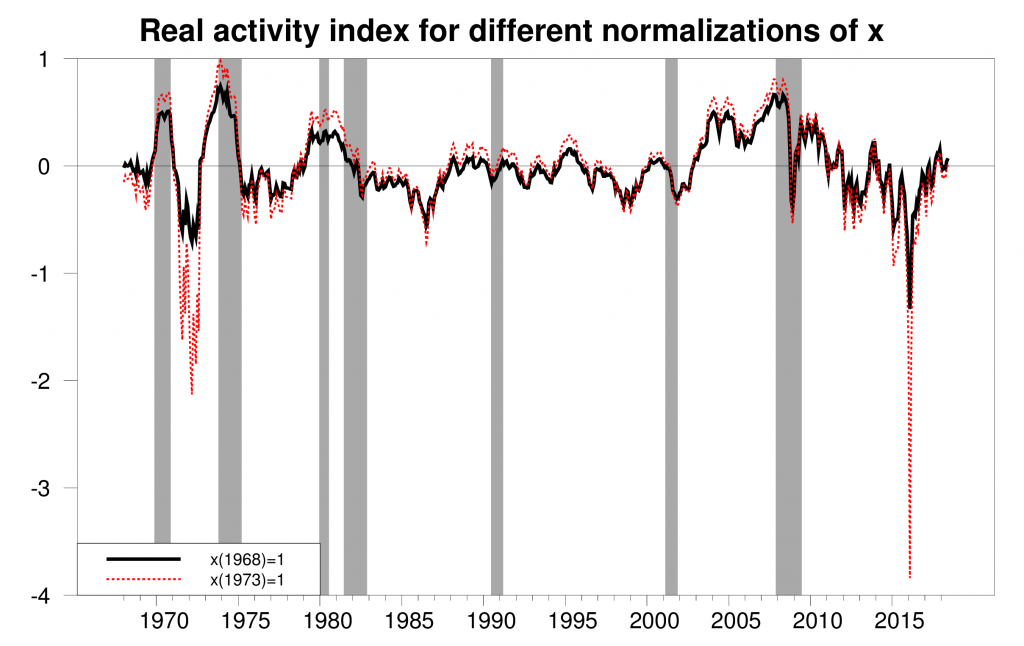 Does the index resulting from Kilian’s choice of c0 correspond to other things we know about global business conditions? The Kilian real activity index is reproduced in the top panel of the next figure. This series suggests that there was a drop in world economic activity in 2015 that was far more severe than that in either the financial crisis of 2008-2009 or the 1974-75 global recession. This conclusion seems hard to justify on the basis of output data we have for any major country. 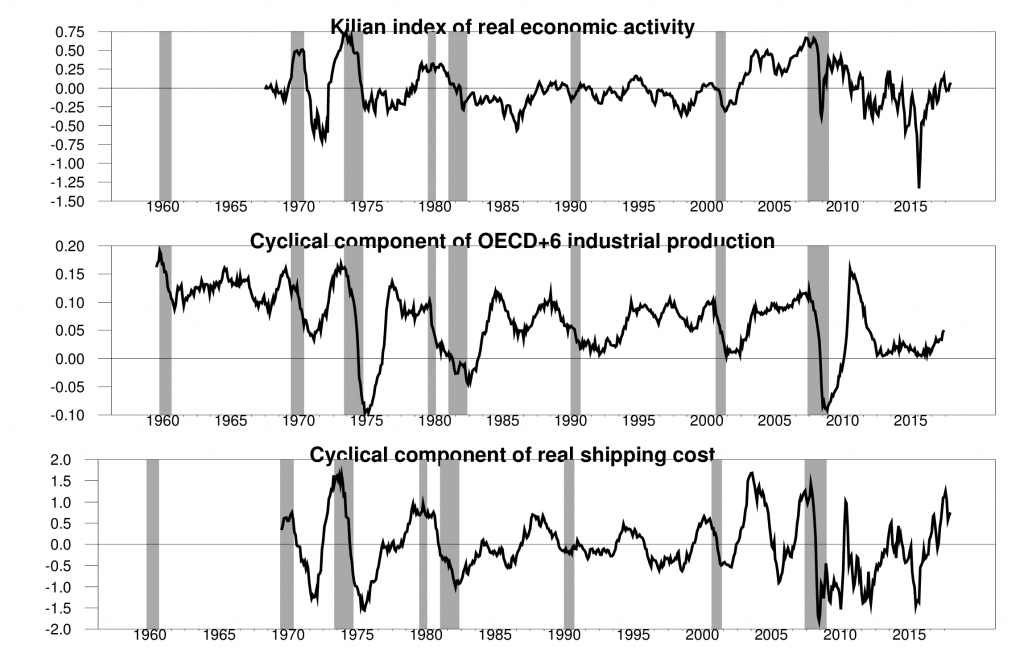 OECD Main Economic Indicators published an estimate of monthly industrial production for the OECD plus 6 other major countries (Brazil, China, India, Indonesia, the Russian Federation and South Africa). The OECD series ends in 2011:10, but in a recent paper with Christiane Baumeister we reproduced the methodology by which the original OECD index was constructed to extend the series through 2017:12. In another recent paper I suggested that taking the two-year change in the log of a series like this is a reasonable way to isolate the cyclical component. That estimate of the cyclical component of industrial production in the OECD plus 6 is plotted in the middle panel above. Unlike the Kilian measure, this series implies that the 1974-75 and 2008-2009 recessions were the most significant downturns in global real activity during this period. The series characterizes 2015 as sluggish growth rather than a separate severe global contraction.

Since BDI is actually reported daily, one can use that same idea to get not just a monthly index of global real activity, but also daily, as I describe in my note. This series is plotted in the graph below. 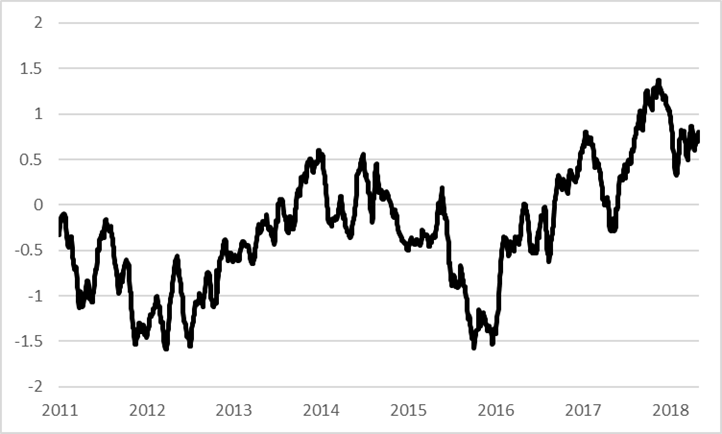 Data for all these series and code to generate them are available on my webpage.