The quasi-nomination of Stephen Moore and Herman Cain to the Federal Reserve Board has resurrected the issue of the gold standard. Jim Hamilton has repeatedly — and convincingly — critiqued the idea of a return to the classical gold standard, here, here, here, and here. But here I talk about what a gold standard for the 21st century would entail.

In “A Gold Standard Does Not Require Interest-Rate Targeting“, Lawrence White critiques an article by Matt O’Brien, noting the operation of the classical gold standard did not involve interest targeting, and hence would not require large variations in interest rates. Rather:

Under the regime of the classical gold standard, a newly minted US $10 dollar coin contained .48375 troy ounces of gold. Alternatively put, the gold definition of the dollar equated 1 troy oz. of gold to $20.67. The dollar price of gold in the US did not vary from that par value (except within the narrow band around parity set by the cost of shipping gold in or out, estimated at less than ±0.33% of par value) despite the absence of offsetting central bank policy. Matt O’Brien’s view is inconsistent with the historical record of the classical gold standard.

That point is true. In point of fact, the classical gold standard did not rely on explicit interest rate manipulation; nor did adjustment work through the Humean price-specie-flow mechanism wherein excess provision of money leads to an outflow of gold. In fact, there was some variation in gold prices within the gold point bands determined by the cost of transporting gold.

The point is that — irrespective of the existence or not of a central bank — a nominal anchor like a gold price limits the autonomy of monetary policy. The more mobile capital is (i.e., the lower the barriers to financial capital movements, and the less insulated the banking sector), the less autonomy.

This is just an application of the “international trilemma” or “impossible trilemma”. Mundell-Fleming… 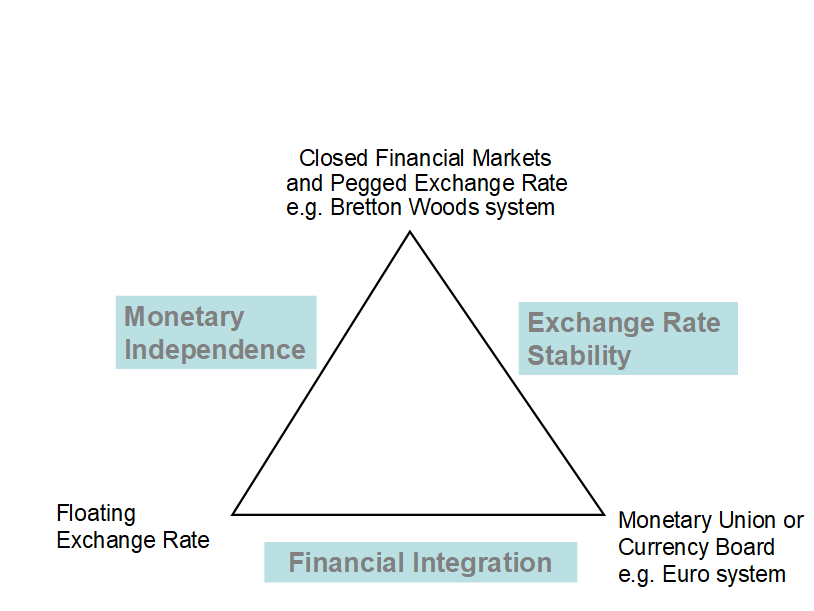 The gold standard is merely a specific form of a very hard fix. During the classical gold standard, capital mobility was not perfect, so (even with near perfect credibility) monetary authorities had some latitude. Even then, as Obstfeld, Shambaugh and Taylor pointed out, the gold standard had higher interest rate correlations (less monetary autonomy) than under other regimes.

In 2019, capital mobility is much, much higher. FX trading, according to the 2016 BIS survey, is around $5 trillion per day. Uncovered interest parity seems to hold. Even countries with $4 trillion in foreign exchange reserves have to fear financial capital outflows.

In other words, in the modern high capital mobility world, adjustment via sterilized depletion of foreign exchange reserves (or gold, in the case of a return of the gold standard) is not feasible. The money supply will endogenously shrink, or countries will have to resort to an interest rate defense.

And that was my point: A fixed exchange rate regime, credibly and irrevocably linked to gold, will eliminate monetary policy autonomy. Demand, supply, liquidity, all sorts of shocks will manifest in adjustments in interest rates. 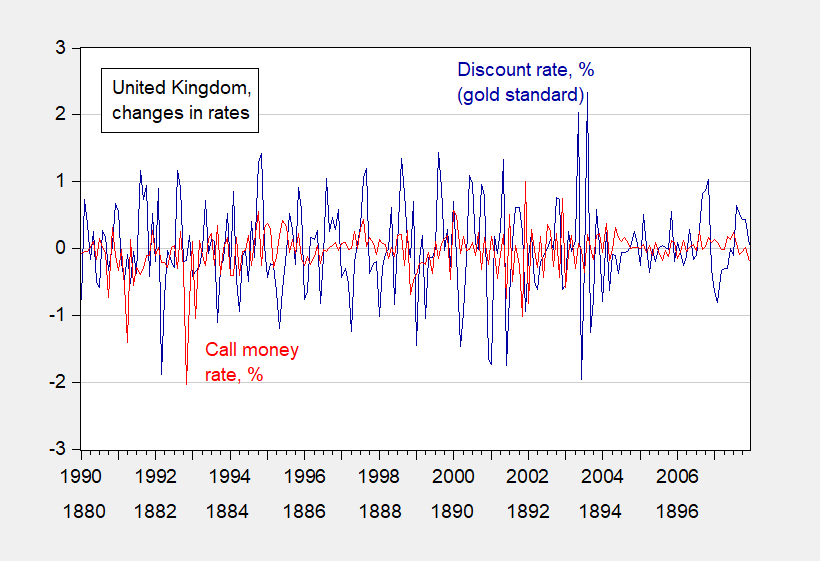 This finding is robust to the use of other series; substitute in the base rate for the discount rate. 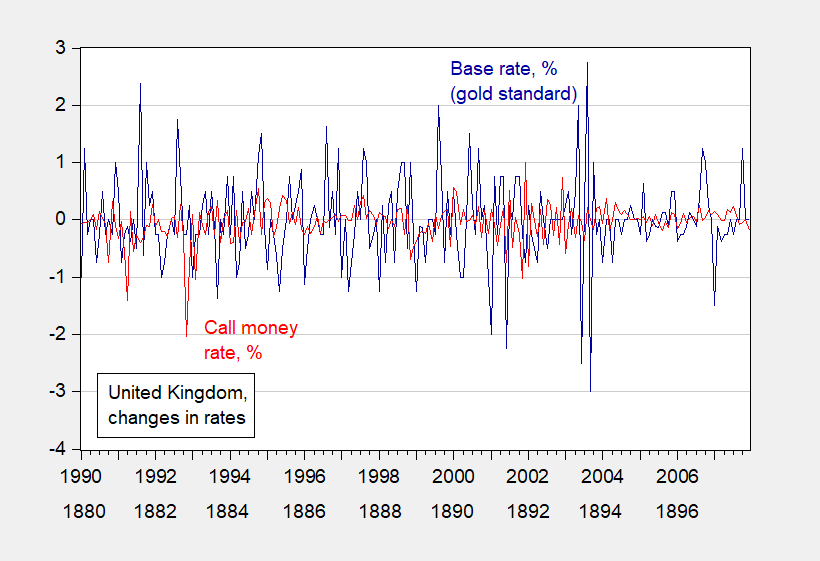 Figure 3: Month on month change in UK call money rate (red), and in Great Britain open market base rate (dark blue), both in %. Source: FRED, and Neal-Weidenmier via Alan Taylor.

The standard deviation of changes in the base rate over the gold standard is 0.69 percentage points.

I think the gold standard could be sustained from some time, just like Argentina sustained its currency board. But that experience shows that more is needed than merely enshrining the hard fix in the constitution; the concomitants of giving up monetary autonomy are also necessary. (So, see Barry Eichengreen’s Golden Fetters for the authoritative work.)

Postscript: I’ve skipped the point about calculating the necessary interest rate changes to target the exchange rate (in this case, the price of gold). The estimate obtained in this post was based upon the Dornbusch-Frankel sticky price monetary model. Use of this number is validated if one thinks price stickiness is invariant to the exchange rate regime, i.e., the Lucas econometric policy evaluation critique does not apply. This is dubious in theoretical terms, but it is an open question whether the change in regime would effect a quantitatively important change. For the empirical relevance of this issue in macroeconomics, see Ericsson and Irons. 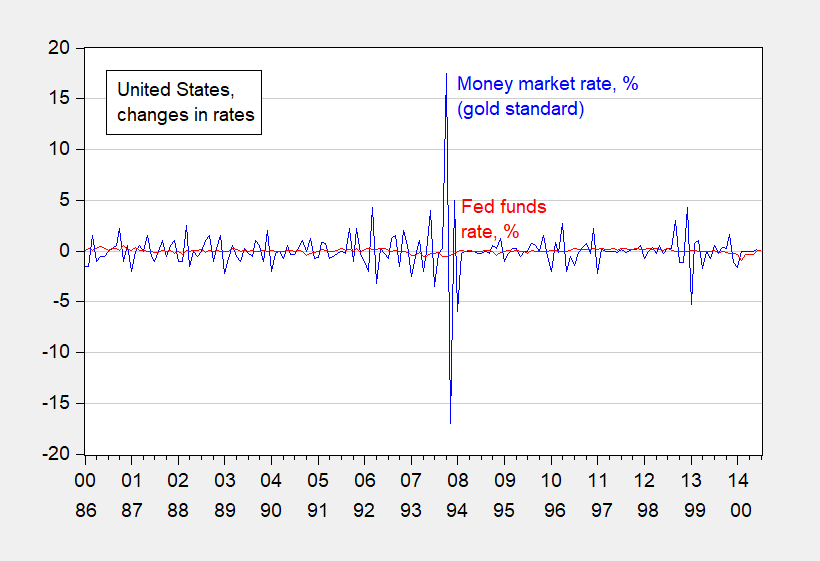 Figure 4: Month on month change in US Fed funds rate (red), and in money market rate (blue), both in %. Source: FRED, and Neal-Weidenmier via Alan Taylor.