Today, we are pleased to present a guest contribution written by Eric Sims and Jing Cynthia Wu (both from the University of Notre Dame), based on their paper of the same title.

In “Evaluating Central Banks’ Tool Kit: Past, Present, and Future,” we develop a structural DSGE model that allows one to simultaneously study the three principal tools of unconventional monetary policy in a unified framework – quantitative easing (QE), forward guidance (FG), and negative interest rate policy (NIRP). The model features the usual real and nominal frictions found in NK-DSGE models. In addition, there exist financial intermediaries that engage in maturity transformation by funding themselves with short term debt from households and holding long term debt that is issued by firms to support investment. Intermediaries are subject to an endogenous balance sheet constraint. This constraint gives rise to excess returns of long over short bonds. Intermediaries also hold interest-bearing reserve balances with the central bank. The central bank can create reserves to purchases bonds from intermediaries; doing so alleviates the balance sheet constraint they face, resulting in lower interest rate spreads and higher aggregate demand. A ZLB constraint is imposed on the nominal interest rate on short term debt held by households, but the central bank may push the interest rate on reserves into negative territory. Negative interest rates affect the real economy through both a forward guidance and banking channel. Lowering the interest rate on reserves into negative territory signals a commitment to lower short term rates in the future, stimulating the economy in a manner identical to forward guidance. On the other hand, negative rates on reserves erodes the net worth of intermediaries, which exacerbates the balance sheet constraint they face and pushes interest rate spreads up.

In a quantitative application, we show that exogenous changes in any of the unconventional tools can in principal affect output in a way similar to a conventional monetary policy shock. The requisite FG and NIRP interventions are implausibly large, so we argue that QE is likely to be the most desirable of the unconventional tools. We then postulate a novel but simple endogenous feedback rule for central bank bond purchases that has the flavor of a conventional Taylor rule for policy rates. Following such a rule when short term rates are constrained is successful in alleviating the adverse consequences of the ZLB. In an application meant to mimic the experience of the US in the Great Recession, we show that their endogenous QE rule significantly mitigates the output decline from a series of adverse demand shocks. By increasing the central bank’s balance sheet in an amount similar to what the Fed did over QE1-QE3, endogenous QE provides stimulus to the economy roughly the equivalent of pushing short term rates two percentage points below zero. This is close to the estimated decline in the “shadow rate” series from Wu and Xia (2016).

Shown below is Figure 7 from the paper. It plots simulated paths of output (relative to steady state), the policy rate, the central bank’s balance sheet (relative to GDP), and the real long yield (the nominal yield to maturity on private long term debt less one period ahead expected inflation). The dash-dotted blue lines show paths under conventional monetary policy with no ZLB constraint, the red dashed lines impose a ZLB with no unconventional policy, and the solid purple lines shows responses with endogenous QE during the ZLB period. It is clear that endogenous QE largely mitigates the adverse consequences of the ZLB binding. 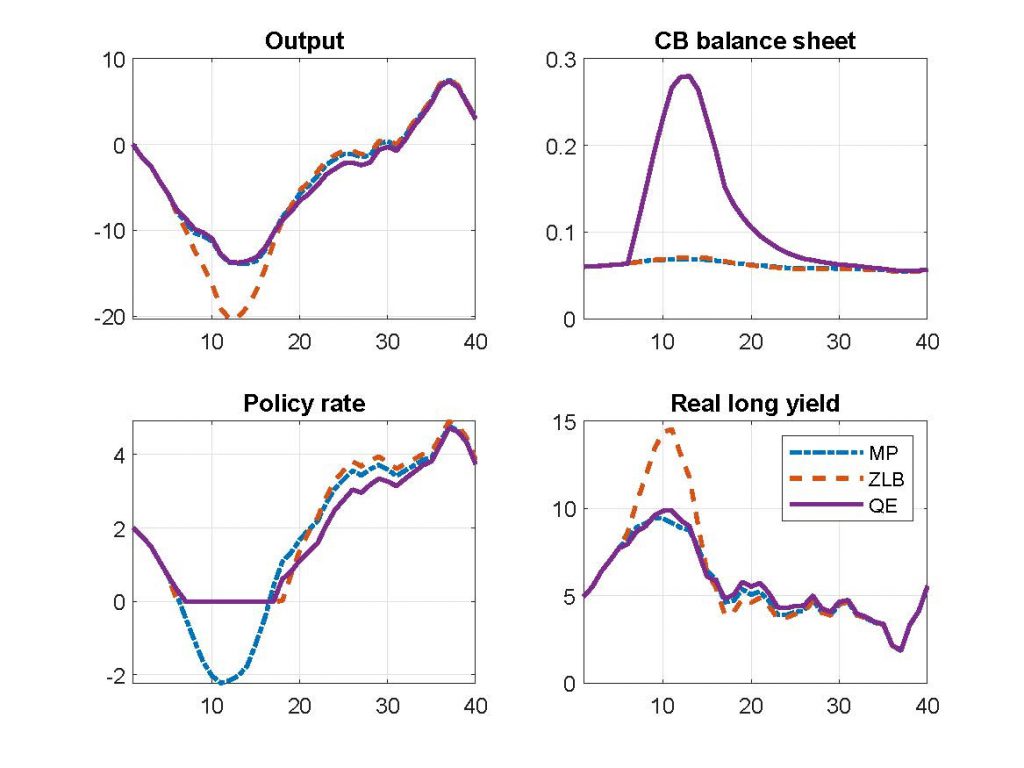 This post written by Eric Sims and Jing Cynthia Wu.