From Anneken Tappe in CNNBusiness:

The Economist’s Big Mac Index — a lighthearted way to make the value of currencies more tangible — showed that nearly all currencies in the index are undervalued against the dollar.

The Big Mac Index, released Wednesday, is rooted in the theory of purchasing power parity: Exchange rates reflect the value of goods a currency can buy. If currency X can buy an item at a lower price than currency Y, then currency X may be comparatively undervalued and currency Y could be overvalued.

The other concern is (2); as I highlight in my recent survey for the Oxford Research Encyclopedia of Economics Finance, strict PPP is unlikely to hold for countries of substantially different levels of per capita income. Rather, the “Penn effect” holds, so that a proper assessment of currency misalignment should consider the country’s per capita level of income.

In Figure 1, I present the price of a Big Mac in US dollar terms (relative to the price in the US, logged) against the relative income levels of a country relative to that of the US [both variables in logs]. 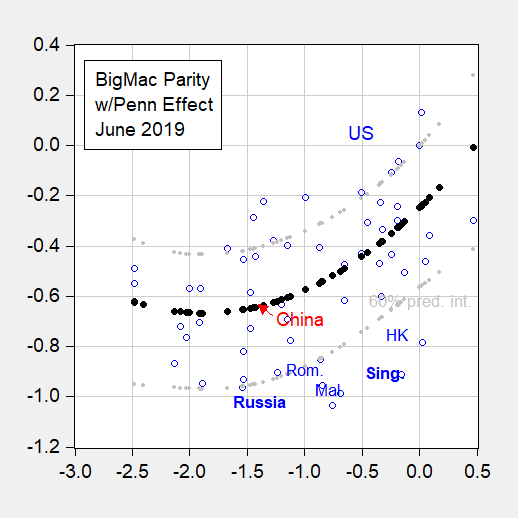 The nonlinear specification is due to Hassan (2016). Note that the results incorporate the fact that lower income countries have lower prices for Big Macs, instead of using the PPP baseline which would imply a Moldovan Big Mac costs the same as a Swiss Big Mac.

The prediction interval indicates that there is some imprecision regarding whether the US dollar is truly overvalued, whether the Chinese yuan is undervalued, relative to a multilateral assessment of the best fit estimate of the relationship. (If I’d forced the fitted curve to go through log relative price 0 at log relative per capita income 0, then I’d be assessing the Penn effect in US dollar terms).

The results suggest that if one is using Big MacParity accounting for income levels, then Trump should really be pursuing… Russia (and Singapore). Additional economic reasons to be wary of massive fx intervention on the basis of alleged currency misalignment from Mark Sobel.

43 thoughts on “Of Big Macs, PPP, the Penn Effect, and Currency Misalignment”