First, the word ‘confidence’ can be misleading. If the underlying data is bad, if the survey method is weak, if respondents lied, if the sample is not random (but not known to be so), and if the analyst cherry picks data, then the confidence interval can be wildly misleading. If the public reads ‘a 95% confidence interval’, then they think that surely the true mean must be within that interval in all likelihood. But that’s not what the CI means if any of the above mentioned conditions — bad data, bad survey, dishonest statistician — pertains. The only thing is says is that the CI for the calculation for data as it exists and was selected for inclusion yields that particular CI.

The second problem is that a 95% confidence interval is often not actionable. In the example about, the range is from 800 to 8,000. So does one send out the dogs and excavators or not? Can’t tell from the CI. In the real world, CI of this size are all but useless most of the time.

And of course, in a normal distribution, the mean is not only the central value, but also the most likely value.

What’s the alternative to a confidence interval. Maybe a “range”. As I was teaching a review of probability today, I was reminded of this unequivocal statement by Steven Kopits on May 31st, regarding estimates of the Maria death toll in the context of the Harvard study:

I would note that excess deaths fell by half in December. Thus, the data suggests that the hurricane accelerated the deaths of ill and dying people, rather than killing them outright. I would expect the excess deaths at a year horizon (through, say, Oct. 1, 2018) to total perhaps 200-400. Still a notable number, but certainly not 4,600.

Notice, this is not a “confidence interval”, it’s just a range, pulled out of the air. I see a lot of this kind of certitude from people who have not learned their statistical theory well. More recently, we have the following results. From Sandberg, et al. (July 2019) in Epidemiology: 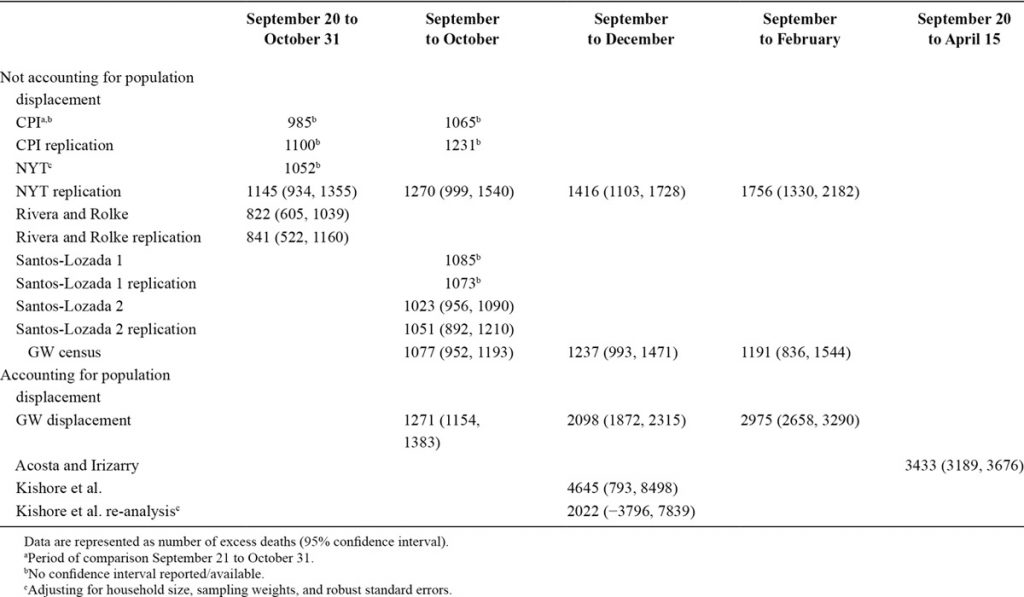 Here’s the officially sanctioned (by the Puerto Rico government) report’s estimates (listed as GW displacement in the Table above), as well as my estimates. 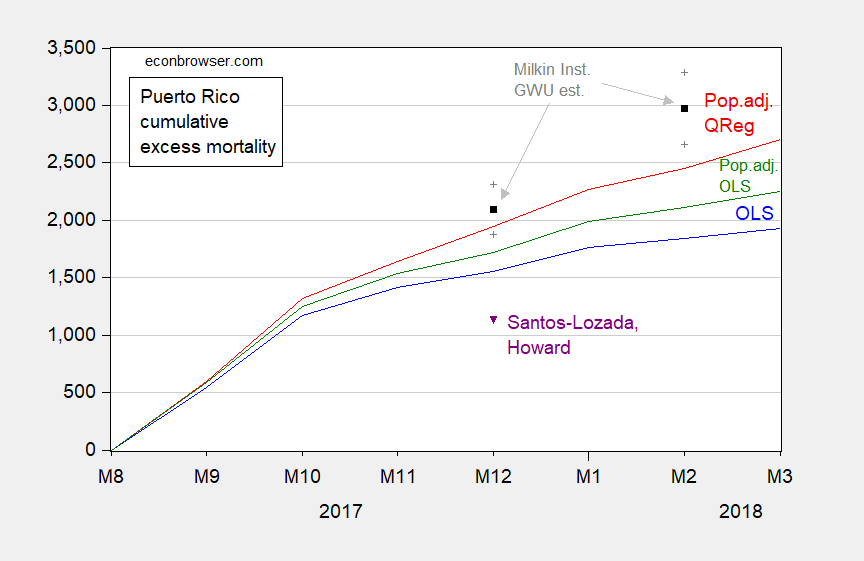 Of course, this was based on December statistics which were published in the Latino USA article. The May 31 release of deaths revised December up materially, although it did show a decline, as did January. February and March were up. April and May data I think remain too soon to use with confidence. Thus, it would seem that the Oct. 1 number would be higher than expected, but I am unable to make a fixed forecast at this point, as we do not have an unambiguous peak for excess deaths at this point.

But even by May 31, there was widespread knowledge that the count data that Mr. Kopits relied upon was too low, as evidenced by this December 2017 NYT article. That is called “measurement error”.  I suppose that we could, like Mr. Kopits, ignore the consequences of such a phenomenon. But I’m pretty sure that’s not the right thing to do, even if it’s classical measurement error (and in this case, I suspect it’s not). [for classical, see this simple exposition]

Bottom line: It’s good to have some statistical theory incorporated into making your estimates and measures of uncertainty.

Were I heading the Harvard study, I would not have used confidence intervals at all. I would have said to my staff:

“So, we’re using an experimental approach that may or may not work. We don’t know if our sample is truly random, and we don’t know if our status as outsiders has affected the frankness of answers given. We think that respondents may have a financial stake in the answers they give. We know that three people in 100 are pretty much nuts, and that we’re trying to find events — deaths — that are comparatively rare, even under the current circumstances. If even 10 people in 4,000 embellished their answers, lied to us because we’re outsiders who came from Harvard and didn’t like us, or believed that they would receive death benefits based on their answers, then we’re going to be way off. So let me help you here. I want this thing caveated to hell and back. This is a good try, an experiment to see if our findings ultimately line up with the recorded mortality data. But remember, our credibility is at risk here. Either people died, or they didn’t. If they did, they are going to show up — every one of them — in the data. If we’re wrong, we’re going to be wrong is a very public way. So, let’s put it out there as a new technique, but let’s not oversell it. Truth is, we don’t know if a survey approach works, and won’t for several months. Let’s put the findings out there, but I don’t want to see anything with the word ‘confidence’ in it.”

By the way, the method used in the Harvard SPH study was not “experimental”, by any means.

15 thoughts on “A “Critique” of Confidence Intervals”