Treasury has been engaging closely with China over developments in the Chinese renminbi (RMB). China has a long history of facilitating an undervalued currency through protracted, one-sided intervention in the foreign exchange market and other tools. Over the summer, China took concrete steps to devalue the RMB. Subsequently, Treasury determined under Section 3004 of the Omnibus Trade and Competitiveness Act of 1988 that China was a currency manipulator, given that the purpose of China’s devaluation was to gain unfair competitive advantage in international trade.

Intensive trade and currency negotiations between the United States and China over the last few months resulted in a Phase One agreement that requires structural reforms and other changes to China’s economic and trade regime in several key areas, including currency and foreign exchange issues. In this agreement, China has made enforceable commitments to refrain from competitive devaluation and not target its exchange rate for competitive purposes. China has also agreed to publish relevant information related to exchange rates and external balances. Meanwhile, after depreciating as far as 7.18 RMB per U.S. dollar in early September, the RMB subsequently appreciated in October and is currently trading at about 6.93 RMB per dollar.

In this context, Treasury has determined that China should no longer be designated as a
currency manipulator at this time.

From a narrow balance of payments perspective, the currency manipulation issue should’ve been decided by this graph: 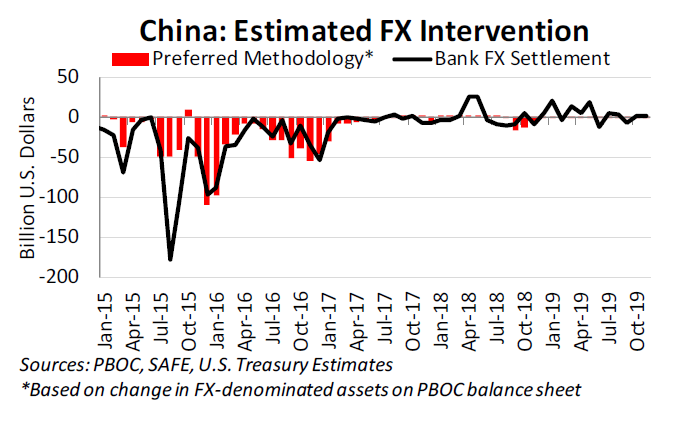 From my perspective on currency misalignment (see discussion here), the key graph is here: 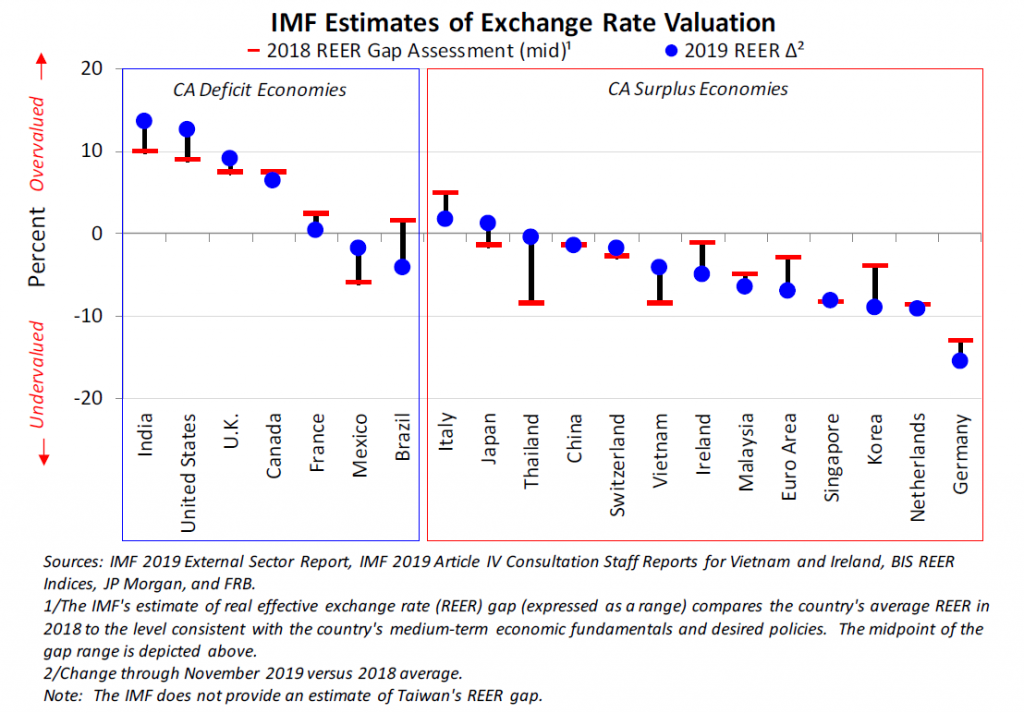 As of November, the trade weighted CNY is about the same as when Mr. Trump took office.

What of the main issue that the Administration went to trade war over, the assassination of Archduke Ferdinand the extensive use of industrial subsidies? From the report:

The pervasive use of explicit and implicit subsidies as well as non-tariff barriers and other unfair practices are increasingly distorting China’s economic relationships with its trading partners. This Administration has made it clear that the United States will confront China’s unfair practices — including forced technology transfer, weak intellectual property rights protection, and industrial subsidies — and will strive for a fairer and more balanced economic relationship.

Well, here the Administration has punted (apparently). This language will probably be mirrored in the “deal” that will be signed tomorrow.