“Red Dawn” emails documenting how everybody who was knowledgeable about pandemic threats knew by 1/28, even as Trump kept on comparing the novel coronavirus to the flu up to March 9th – example: 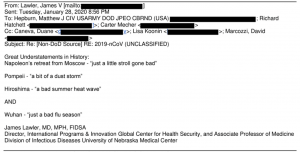 I still wait to find out when the President’s Daily Brief on the coronavirus threat was circulated.