In this post we assess contagion among government bond markets by focusing on the Covid-19 crisis period. Using the approach put forward by Diebold and Yilmaz (2014), we empirically show that the connectedness dramatically increased on international bond markets over the crisis period. More specifically, this global shock seems to discriminate between safe and risky countries, those latter seeing a large increase in sovereign spreads.

The Covid-19 global crisis generated a worldwide recession (see previous Econbrowser posts here,  here and here), as well as abrupt movements on financial markets. For example, oil prices sharply dropped so that price of the May crude-oil futures contract closed on April 20 at negative $37.63 a barrel (see this Econbrowser post here). On the bond market, the 10-year US government bond yield went down from a level close to 2% end of December 2019 to levels between 0.6%-0.7%, in a flight-to-quality move (see Figure 1).

How to assess contagion dynamics on the global bond market?

In order to assess contagion on the global sovereign bond market, let’s consider daily 10-year government bond returns denominated in local currencies for a bunch of industrialized and emerging countries. The countries selected are: Brazil, China, South Africa for emerging economies and the United Kingdom (UK), the United States (USA) and Germany for advanced economies. The study period runs from January 03, 2006, to April 13, 2020, and all data are extracted from Thomson Reuters Datastream. To obtain time series with the same integration order, we use bond returns and not yields.

The methodology that we use to compute contagion within this system is the one developed by Diebold and Yilmaz in a series of papers in order to compute connectedness indexes. To this aim, we estimate a VAR (Vectorial AutoRegressive) model and compute the generalized forecast error variance. By decomposing this forecast error variance, we identify for each country the share of variance attributable to the different countries in the system. The “own variance share” is the share of variance due to the country itself (thus measuring the openness of the country). The “cross variance share” or “pairwise spillover” is the share of variance of a given country only due to other countries. Once the covariance matrix is computed, we can measure the total spillover index (‘TSI’), measuring the global connectedness of the system. In addition, we can measure the directional and the net spillover indexes. The directional spillovers are the government yield spillovers transmitted by a country to all other markets (‘TO’) and the government yield spillovers received by a country from all other markets (‘FROM’). The net spillover from a given country to others consists in the difference between the share of variance given to others (‘TO’) and the share of variance received from others (‘FROM’).

Network analysis of over the sample

First, we study government bond market spillovers through a full-sample static analysis to get the average contagion behavior. Figure 2 is the network graph of the “cross variance share”. The size of the nodes represents the average pairwise connectedness; the larger the node, the more strongly the country’s bond market is connected to the other bond markets within the system. The link arrows indicate the pairwise connectedness “TO” and “FROM”. Their sizes are proportional to the percentage variance of the forecast errors they give or receive from other markets.  We observe that there is a strong connectedness between the bond markets of the advanced economies. Those three markets represent the primary senders (“TO”) and receivers of shocks (“FROM”). The strongest interconnection is between Germany and the UK: about 25% of the forecast error variance of the UK (Germany) bond market is explained by a shock stemming from the German (UK) bond market. We also note that bond markets of emerging economies are, on average, only slightly affected by shocks from other markets. This result can be explained by the lower level of financial openness to foreign investors, particularly as regards the Chinese bond market. A similar result has been found for equity markets in emerging countries (see here). 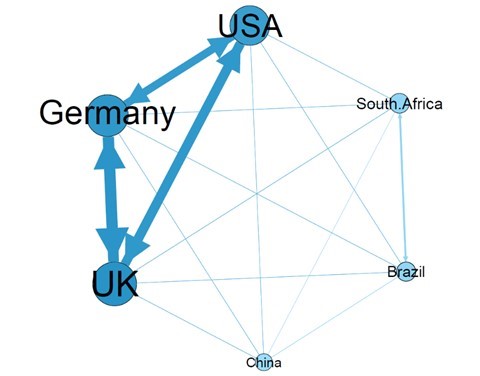 In a second step, to account for the possible variation over time of our spillover indexes, we analyze these indexes in a dynamic rolling-sample analysis. In Figure 3, we observe significant evolutions in the degree of contagion across government bond markets. In particular, the degree of interconnectedness increases during economic or financial turmoil, as illustrated by the spikes during the Global Financial crisis and the Brexit uncertainty period in the wake of the June 2016 referendum. What is striking to observe is the sharp rise in contagion for the Covid-19 pandemic crisis at the end of the sample, reflecting thus a much higher connectedness within the global sovereign bond market over the recent period.

Figure 3. Evolution of contagion among the system 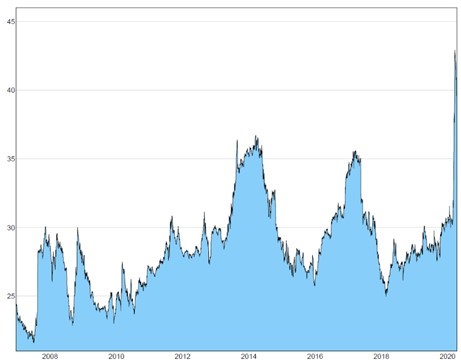 What are the main take-aways of this contagion analysis? First, the global bond market is in general mainly driven by connections between advanced economies. Second, every time there is an economic crisis, the contagion tends to increase. Third, the Covid-19 crisis reveals a very sharp increase in the degree of connectedness within the system, reflecting the fact that the emerging countries have been also impacted by this global shock (see data on Figure 4).

Overall, it seems that today investors discriminate between safe countries, for which government bond yields dropped and are likely to stay low, and riskier countries that have seen a jump in their sovereign bond yields. The consequences of this market discrimination might be crucial as regards public debt sustainability. Indeed, if some emerging economy governments have to increase their spending to fight the Covid-19 crisis, then they will have to borrow on markets at a much higher rate, leading to some future public debt issues. It is true that on average, the debt ratio is lower for emerging countries as a whole (see this IMF blog), but some countries, especially oil exporters, are likely to be at risk in upcoming months. Against this background, support from international institutions and international cooperation will have to step up. 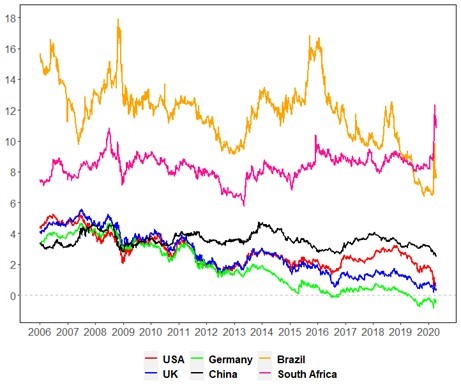 This post written by Laurent Ferrara and Capucine Nobletz.