On Friday, the CBO released The Effects of Pandemic-Related Legislation on Output.

In March and April of 2020, four major federal laws were enacted to address the public health emergency and the economic distress created by the 2020 coronavirus pandemic. That legislation provides financial support to households, businesses, and state and local governments. In this report, the Congressional Budget Office estimates the legislation’s effects on economic output.

Here’s a graphical depiction of GDP’s trajectory under the counterfactual of no-Covid-19 recovery legislation: 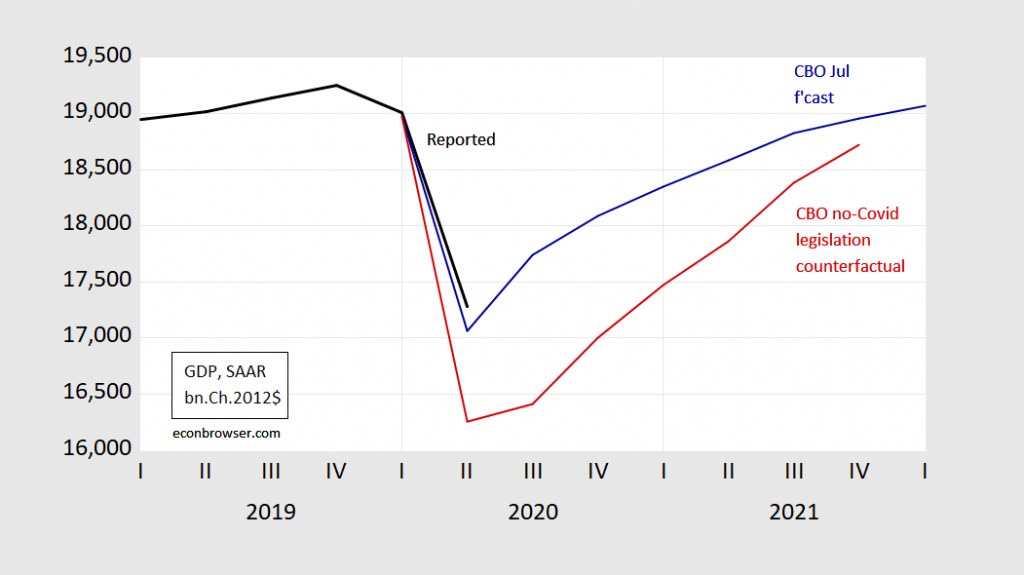 I based Figure 1 on the estimates of macro impact contained in Table 2: 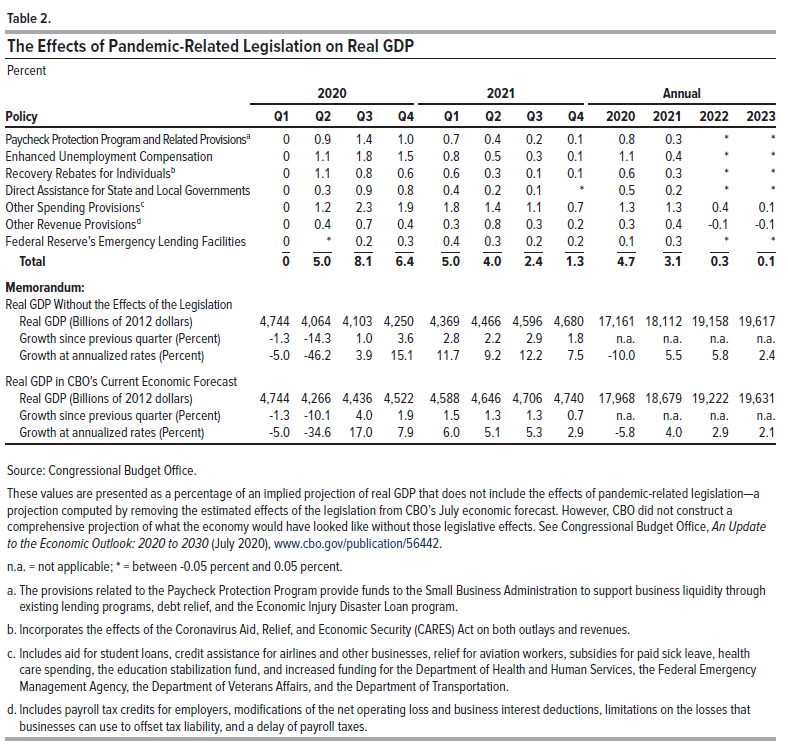 These estimated impacts in turn are based on the estimated spending levels associated with the legislation so far enacted. 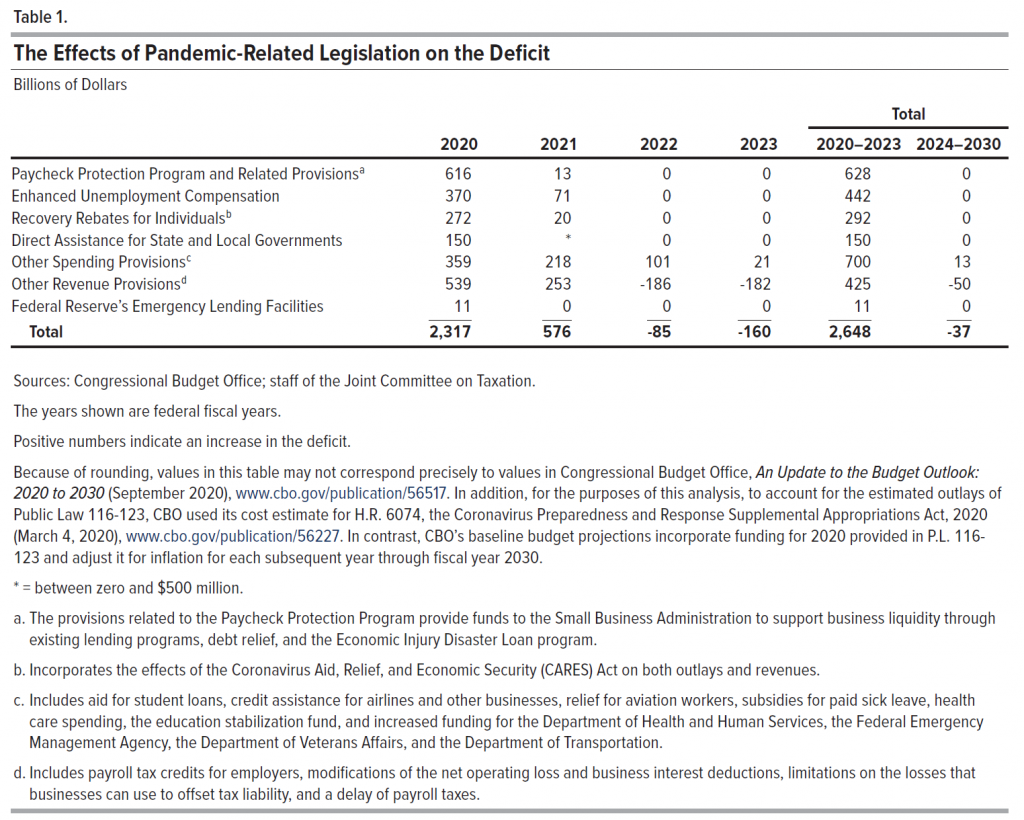 As discussed on many occasions in this blog, the multiplier associated with each of these spending provisions depends on a variety of factors (spending vs. transfers, for instance), and the overall multiplier effect in particular depends on the conduct of monetary policy (well, we know now that the Fed has committed to three years of essentially zero Fed funds rates) and whether there is slack in the economy. As noted in the report (page7):

In CBO’s assessment, the effects of changes in spending or revenues on output are larger when the economy is weak or when short-term interest rates are near zero and
are expected to remain there for several years, a situation known as being at the effective lower bound.12 At such times, the Federal Reserve would not respond, in CBO’s
view, by raising short-term interest rates to restrain the boost in overall demand. In contrast, if the increase in spending or the reduction in revenues occurred when output was at or above its potential level, the Federal Reserve would probably raise the path of short-term
interest rates to prevent inflation from rising above its long-term goal, thereby restraining the boost in overall demand and output.

CBO expects the economy to operate considerably below its potential level over the next several years. The Federal Reserve is therefore expected to keep interest rates low
over that period. As a result, the legislation’s changes to federal spending and revenues—most of which are projected to occur in 2020 and 2021—will boost overall demand and output more than they would under normal economic conditions, CBO expects.

Footnote 12 contains a nice review of the literature. My treatment is here, quoting extensively from my New Palgrave Dictionary of Economics entry on multipliers.

Note that given the likely accommodative nature of monetary policy, substantial crowding out of investment seems unlikely (page 7).

CBO highlights the uncertainty of the estimated impacts, given the unprecedented nature of current conditions (when did we last have a pandemic like this with such confused federal/state response?). This is done in the report’s Figure 1. 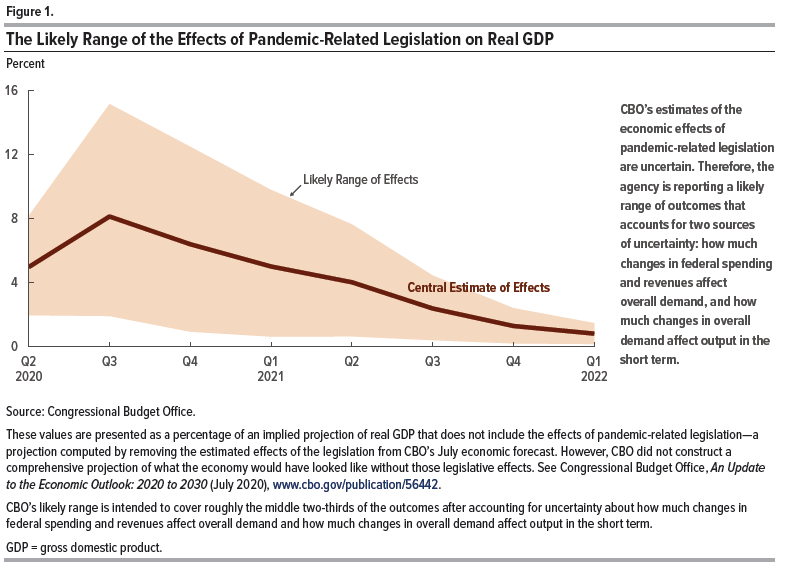 Multipliers for each major category are: