Today we are fortunate to present a guest contribution written by Robert Dekle, Professor of Economics at USC.

In many countries, there is much handwringing about how robots will replace labor. In countries such as the U.S., China, and Germany, there is widespread fear that the adoption of robots will lead to technological unemployment, as humans are replaced by machines.

Japan, however, remains an exception. In Japan, public opinion is such that robots are less of a threat to jobs and more about economic survival, as the nation suffers from a chronic labor shortage. The country is striving to become the nation substituting the greatest number of jobs with robots.

In my recent work, I showed that this sanguine view about robots and jobs is justified. I found using Japanese data that a rise in robot intensity (robots per 1000 workers) rather than lowering the demand for labor, sharply increased the demand for labor in Japan.

Japan is the ideal laboratory to study the effects of robots on labor demand. While in other countries, robots data start from the mid-1990s, in Japan, robots data run from the late 1970s until today, allowing me to examine the impact of robots on employment over a long span of time, not possible in other economies. One would expect the effects of robots will unfold over decades, instead of the 10 year span examined in the U.S. and in Europe in previous studies.

The chart below shows the growth in the aggregate robot intensity in Japan (robots per 1000 workers) from 1979 to 2012. Overall, there was a 15 fold increase in robots per 1000 workers in Japan during this period. Japan is also much more intense in the use of robots than the U.S. or Europe. Japan in 2012 had about 10 and 5 times as many robots as the U.S. and Europe. The intensity of robots in particular is pronounced in the automobile and electronics industries. 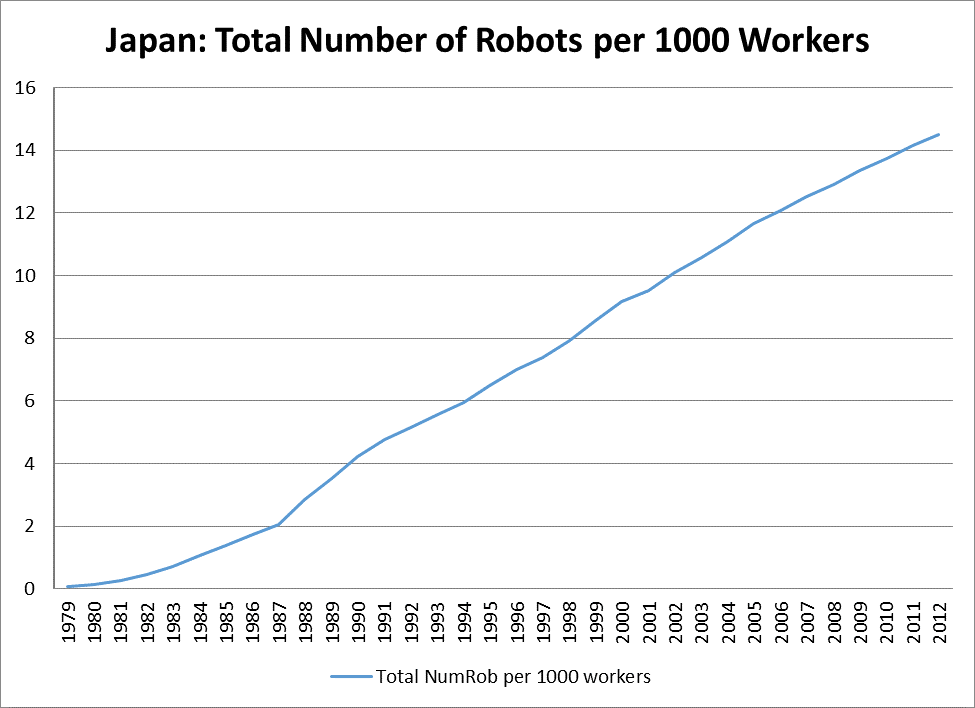 I separate the aggregate impact of robots on labor demand into three distinct effects: 1) the negative displacement effect; which is the substitution of robots into labor at the industry level; 2) the positive “productivity” effect, which is the increased demand for labor in that industry, owing to the decline in costs. 3) The third positive “macroeconomic effect” arises when the productivity increase induced reduction in costs raises total output, which increases demand in all industries.

The Table shows estimates of the three effects on two categories of workers, Total workers and High School graduates (using ordinary least squares; the results were robust to the use of instrumental variables).

The results show that for the Total number of workers, the Displacement and the Productivity effects are statistically insignificant. The aggregate effect is highly significant. From these numbers, we can calculate that the 15 fold increase in robot intensity from 1979 to 2012 raised total employment by about 1/2 percent. For high school graduates, the increase in robots raised their numbers by 1 1/2 percent. These magnitudes are fairly large. For example, according to my estimates, they more than offset the negative effect of Chinese imports on Japanese total employment.

Why is the impact of robots on employment positive for Japan, but negative for the U.S.? In the U.S., the positive productivity effects of introducing robots is too small to offset the negative displacement effects. The history of using robots in the U.S. appears to be simply too short for the U.S. to actually experience the significant productivity gains so that the non-roboticized jobs can expand.

Since the late 1970s, Japan has been hit by various shocks that have collectively lowered employment. These negative shocks, which are not independent of each other, include the offshoring of Japanese production, imports from a rising China, the high yen, and the aging of the population. The employment-population ratio has fallen from about 65 percent in the 1970s to below 55 percent today.

I show that overall, robots have helped offset these negative shocks that have ravaged the Japanese economy. Robots have raised the productivity of Japanese industries, helped lower costs, raised average industry wages, and helped sustain the global market shares of Japanese corporations. This has allowed aggregate demand for Japanese labor to be higher than otherwise.