Two years ago, as part of a multi-year project, Charles Engel and I organized a conference on current account sustainability in major advanced economies.
Lask week, we convened a follow-up conference aimed at updating our knowledge on this subject. Below is the latest read on the U.S. current account to GDP.


The agenda for this year’s conference is here. Economists from the Federal Reserve System, the European Central Bank, the IMF,
and universities (Harvard, Columbia, Virginia, European University Institute, USC, as well as Wisconsin) participated.


Steve Kamin started off the conference with a paper entitled “How Long Can the Unsustainable U.S. Deficit be Sustained?” (coauthored with Carol Bertaut and
Charles Thomas). In the paper, they investigate the prospects for the U.S. current account
deficit, examining in particular how long it will take for measures of external
debt and debt service to reach levels that could prompt some pullback by global investors (if ever).


They address these issues using projections from a detailed partial-equilibrium
model of the U.S. balance of payments. Under plausible assumptions of income at home and the rest of the world, the current account deficit will resume widening and
the negative NIIP/GDP ratio will continue to expand. However,
even by the year 2020, the negative NIIP/GDP ratio will be no higher than it is in several
industrial economies today, and U.S. net investment income payments will remain very low.


They also examine the issue of sustainability from the perspective of portfolio holdings. They conclude that it
would take many eyars for the U.S. debt to cumulate to a level that would test global investors’ willingness to extend financing.

A somewhat different perspective on exactly how the U.S. accounts stand is provided by a paper presented by Frank Warnock. In “Current Account Sustainability and the Relative Reliability of the International Accounts,” coauthored with Stephanie Curcuru and Charles Thomas, they conduct a forensic analysis of the gaps in the U.S. international accounts, in order to determine why there is a gap between the cumulated current account and the net international investment position. They conclude that a closer examination of the data suggests that there is little evidence of an exorbitant privilege within asset classes, save for FDI. Hence, current account sustainability assessments predicated on the existence of dark matter might rightly be questioned. While the paper is preliminary and not available online, some related insights can be found in Curcuru, Dvorak and Warnock.

Interestingly, even two years after our first conference, economists are still debating why the U.S. current account spread so widely. Marcel Fratzscher, in a paper coauthored with Roland Straub, argues in Asset Prices and Current Account Fluctuations in G7 Economies that equity price shocks were important.

The paper analyses the effect of equity price shocks on current account positions for 16 industrialized countries in 1974-2007. It presents a DSGE model to derive restrictions for the identification of asset price shocks, and uses a Bayesian VAR with sign restrictions to empirically test for the effect of equity price shocks. Such shocks are found to exert a sizeable effect, with a 10% equity price increase for instance in the United States relative
to the rest of the world worsening the US trade balance by 0.9 percentage points after 16 quarters. Moreover, the response of the trade balance to equity price shocks varies substantially across countries, and this heterogeneity appears to be linked in particular
to the financial market depth and equity home bias of countries.

In contrast, Robert Dekle, in a paper coauthored with Suparna Chakraborty, takes a different tack:

What are the macroeconomic effects of shocks to government spending? We analyze this
question by specifically exploring non-linearities in the impact of fiscal shocks on output, private
consumption, the trade balance, and real exchange rates in a sample of OECD countries. We
consider non-linearities due to the size of the shock, the degree of openness and size of the country,
and the initial budgetary conditions. After identifying fiscal shocks as residuals of estimated
spending rules, we use them as explanatory variables in single variable regressions, including
interaction terms. In our finding, in normal times the consumption multiplier is positive, yet
quickly decreasing in the size of expansions; at times of fiscal strain it becomes unambiguously
negative. Correspondingly, the trade balance deteriorates substantially in normal times, consistent
with twin deficits; it shrinks, and turns into a small surplus at times of fiscal strain.

This paper reexamines the global distribution of current accounts viewed from a longer term
perspective. Using a panel of over one hundred countries that comprise over 95 percent of
world output, the analysis establishes a set of “stylized facts” regarding the individual and
collective behavior of current accounts over the past four decades. In particular, we examine
the dispersion properties of external imbalances and interpret these empirical regularities in
the context of increasing openness in trade and financial flows — often referred to as
“globalization.”

The basic point is illustrated by this graph. 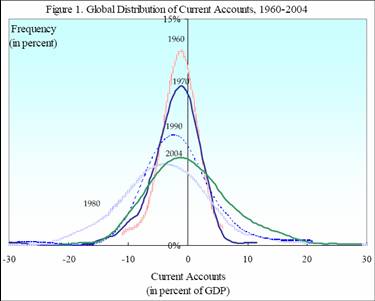 
They find the following: