Monday’s announcement that Chinese growth was decelerating was not surprising; that it decelerated to below the consensus of 9.7% growth to 9% (y/y) in 2008Q3 was a surprise. This was reflected in the headlines: “China growth rate slows sharply” (FT), “China less likely to buffer world crisis as its economy slows” (LA Times), “China’s economy feels chill from global crisis” (AP). For detailed numbers, see Haver.

Figure 1 depicts the growth rate for China’s real GDP over the past 14 years.


Inclusion of the data going back to 1995 (caveat: accomlished only by relying to possibly non-comparable older vintages of the GDP data) puts in some perspective this drop-off in GDP growth. While the 2008Q3 rate is very low relative to recent rates, it’s not an unheard of pace of expansion.

Since I’m not a China expert, I consulted one; Arthur Kroeber writes the GaveKalDragonomics China Insight (not online; here’s Dragonomics’ website). In the latest edition from 15 October (before the 08Q3 release), he writes:

…
China’s economy is slowing, both because of the
global crisis and for domestic cyclical reasons. But the slowdown will be modest,
and in the main provides a welcome and necessary opportunity for industrial
consolidation, rather than posing a more existential risk. A few sectoral problems
— notably in high-end property and low-end exports — will tend to erode bank
profits from their current very high levels over the next couple of years, but with
the possible exception of one or two small and under-capitalized banks the
financial system faces no significant balance sheet risk. However, hopes that
demand from China will substitute for falling OECD demand and rescue the
world from recession will prove ill-founded. And commodity prices have
incorporated a too optimistic view of medium-term Chinese demand growth and
will need a further downward re-rating.

We expect that China will post real GDP growth of around 9.5% in 2008,
followed by growth in the range of 8-8.5% in 2009-2010. These growth rates are
considerably below the 11-12% growth rates of the last two years, but are very
strong by any other reasonable standard, and only a shade below the long-term
trend rate. They are supported by underlying trends in demographics,
productivity and urbanization. The structural problems that contributed to the
previous two Chinese recessions (1989-90 and 1998-99) simply do not exist any
more. Hence the current cyclical downturn will be milder than the earlier ones.

His reasoning is that China’s financial system is insulated from the rest of the world by its focus on the domestic economy, the Chinese economy in real terms remains fairly closed, bank balance sheet risk is small, and — while the property market at the high end is problematic — it remains solid at the low end.

One interesting picture in the document is reproduced below:


I think that others will find it interesting that net exports represent such a small contribution to overall economic growth (recalling that this is a mechanical decomposition using national income accounting). On the other hand, if one is familiar with the debates over the value added component of Chinese exports [0] [1] [2], then this allocation in the 2003-07 period might not seem too surprising.

Since this is merely a mechanical accounting, it’s important to think about the multiplier and spillover effects — i.e., how the transmission of economic effects might differ between different types of activities. Income associated with export industries might go to agents with a higher marginal propensity to consume, and therefore imply a higher Keynesian multiplier. FDI built for export industries might have greater technological spillovers. On the other hand, as Feenstra and Hong have shown, output oriented toward satisfying domestic demand might have greater employment effects; to the extent that workers have a higher MPC, that might mean a higher multiplier associated with less exporting.

Kroeber is fairly sanguine about prospects, given the latitude afforded by a slightly positive fiscal balance (pretty close to zero percent) [3]. Figure 2 presents Dragonomics’ estimate of true GDP (as opposed to offically reported) and the outlook out to 2010. (Plenty of reasons to wonder about those Chinese GDP statistics [4] [5]) 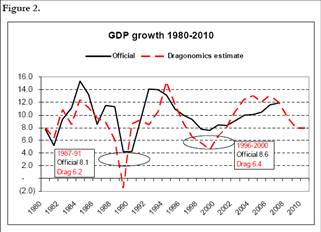 
One observation I will make is that I think China is arguably a relatively open economy. It’s true that when measured in PPP terms, the economy looks relatively closed; but using current exchange rates to do conversions implies that exports plus imports as a ratio of GDP is about 65% (exports are about 35%, imports about 29%). (Using PPP implies a trade openness ratio of about 34%).

That suggests to me the open economy interpretation of the Chinese economy might be pretty appropriate (even if it’s not exactly “small”). I might note that terms of trade effects could also work their way through influencing consumption decisions, even if in an accounting sense net exports account for only a relative small proportion of GDP growth.

That being said, overall, I agree with Kroeber that one shouldn’t overstate the new figures; there are good economic reasons to believe that the government has tools to mitigate the extent of the slowdown — although growth will slow down. Hence, one of the supporting forces for world growth will be diminished, but not removed — unless one of those political factors (which admittedly are completely opaque to me) should come into play as growth slows down…