And forecasts in general

The forecasts, and comparisons against alternatives, are presented in Table 2-2 of the Analytical Perspectives of the Budget.


The Administration forecast is above the Blue Chip forecast, but roughly at the top end of the Fed’s central tendency.

Prakash Loungani had a timely piece on forecasting a couple weeks ago (especially given the possibility of negative shocks emanating from Europe or the Persian Gulf), In it, he noted:

With my colleagues Jair Rodriguez and Hites Ahir, I’ve since looked at the record of forecasting recessions over the decade of the 2000s and during the Great Recession of 2007-09.


Let’s consider the 2000s first and restrict attention to forecasts for twelve large economies — the G7 plus the ‘E7’ (emerging market economies–Brazil, China, India, Korea, Mexico, Russia and Turkey), which together account for over three-quarters of world GDP.


Moreover, while forecasters increasingly started to recognize recessions in the year in which they occurred, the magnitude of the recession was underpredicted in the vast majority of cases. For instance, even as late as December of the year of the recession, the forecast was more optimistic than the outcome in 15 cases. 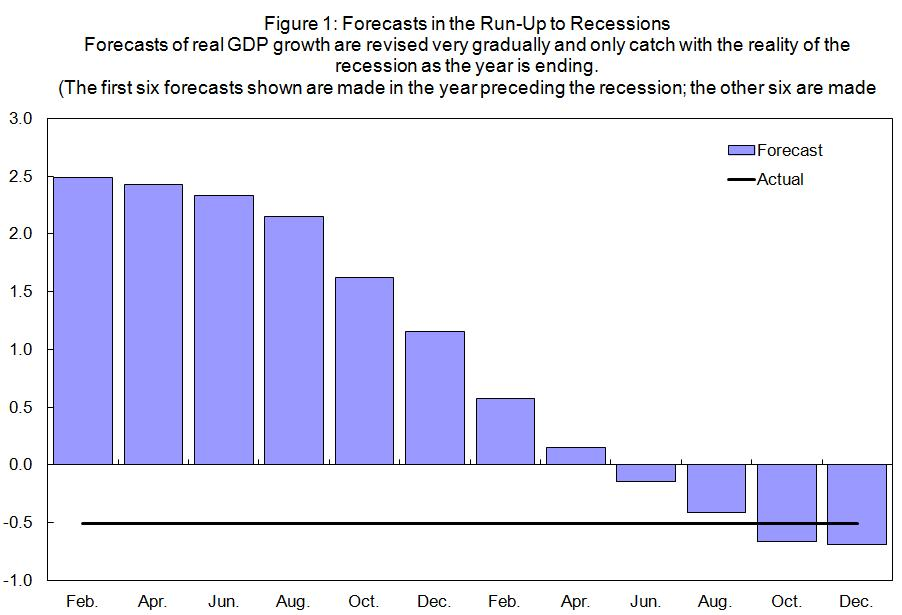 
That being said, I think his take-away is relevant:

The failure to predict recessions does not mean that forecasts of economic growth have no value. But it does suggest that users of forecasts might be better served by paying greater attention to the description of the outlook and the associated risks than to just the central forecast itself.


Reassuringly, it is becoming more common to show how much uncertainty there is about whether the central forecast will come true. It is particularly useful to be explicit about the downside risks to a growth forecast as it can provide a wake-up call for policies and actions needed to keep those risks from materializing.

So, even though there are increasing signs of a durable, albeit slow, recovery, it would be a mistake to take the central tendency of any forecast too seriously. In particular, given the clearly evident downside risks, it would be a big mistake to withdraw stimulus too soon; the payroll tax reduction and the extension of unemployment insurance are critical in this regard. An assessment of what these types of measures can do is recounted here. As CBO notes, these types of measures have potentially the biggest per dollar impact.

Loungani’s other work on forecasting is also relevant, given the foreign sources of uncertainty. From Information Rigidity in Growth Forecasts: Some Cross-Country Evidence (with H. Steckler and N. Tamarisa):

First, there is considerable sluggishness in revisions of growth forecasts. This is consistent with the sticky information models of Mankiw and Reis (2002), the imperfect information models of Woodford (2002) and Sims (2003), and behavioral explanations for forecast smoothing (Nordhaus 1987, Nordhaus and Durlauf, 1984, Fildes and Stekler, 2002).


Second, the sluggishness in forecast revisions declines during recessions and banking crises. We find that forecasts in the year preceding a year of recession start to depart from the unconditional mean, and the pace of revision picks over the course of the year of the recession. A similar pattern holds for banking crises. These finding supports models with state-dependent acquisition of information (e.g. Gorodnichenko 2008).


Third, we confirm the finding of sluggish adjustment in a multivariate setting, by estimating a seven-country VAR model for forecast revisions. The seven economies are the so-called G-3 (U.S., Germany, Japan) and the BRICs (Brazil, Russia, India, China) Forecasters are somewhat slower in absorbing news from other countries than own-country (or domestic) news. Forecasts for non-U.S countries, particularly those for Germany and Japan, are generally slow to absorb news from the U.S. There is also a tendency to absorb news from China at a very sluggish pace.

Volker Wieland and Maik Wolters provide some additional information regarding the relative accuracy of DSGE and old-style Keynesian macroeconometric models, in their Vox article “Macroeconomic model comparisons and forecast competitions”:


The macroeconomic model database is available to download from www.macromodelbase.com and includes over 50 models. We have included models that are used at policy institutions like the IMF, the ECB, the Fed, and in academia. The database includes models of the US economy, the Eurozone, and several multi-country models. Some of the models are fairly small and focus on explaining output, inflation, and interest-rate dynamics. Many others are of medium scale and cover many key macroeconomic aggregates.

We use two small micro-founded New Keynesian models, two medium-size state-of-the-art New Keynesian business-cycle models — often referred to as DSGE models — and for comparison purposes an earlier-generation New Keynesian model (also with rational expectations and nominal rigidities but less strict microeconomic foundations) and a Bayesian VAR model. For each forecast we re-estimate all five models using exactly the data as they were available for professional forecasters when they submitted their forecasts to the SPF. Using these historical data vintages is crucial to ensure comparability to historical forecasts by professionals. We compute successive quarter-by-quarters forecasts up to five quarters ahead for all models.


Figure 1 shows forecasts for annualised quarterly real output growth for the recent financial crisis. The black line shows real-time data until the forecast starting point and revised data afterwards. The grey lines show forecasts collected in the SPF and the green line shows their mean. Model forecasts are shown in red. While data for real GDP become available with a lag of one quarter, professional forecasters can use within-quarter information from data series with a higher frequency. In contrast the models can process only quarterly data. To put the models on an equal footing in terms of information with the forecasts of experts, we condition their forecasts on the mean estimate of the current state of the economy from the SPF.

Figure 1 from Wieland and Wolters(2012). Mean SPF is mean of forecasts from Survey of Professional Forecasters.


Wieland and Wolters conclude that old style Keynesian models are not necessarily to be favored, assuming that their use predominates in the Survey of Professional Forecasters.

I would note that at least the mean SPF predicted a growth deceleration as of 2008Q2, while all the newer vintage models continued predicting acceleration. On the other hand, the newer vintage models did catch the growth rebound better. This characterization is even more true for forecasts starting in 09Q1 or 09Q2. However, for forecast horizons that extend to mid-2010, the SPF seems to me (eyeballing) to do better at matching the deceleration of growth (see their Figure 2).

Further, these are growth rate forecasts; perhaps these are the most important. But as Morely has pointed out, oftentimes we are interested in levels. The treatment of trends then becomes critically important, as discussed at length here (see specifically Morley (2010) and Tovar (2008)).