From “Rounding the Corners of the Policy Trilemma: Sources of monetary policy autonomy,” by Michael Klein and Jay hambaugh:

A central result in international macroeconomics is that a government cannot simultaneously opt for open financial markets, fixed exchange rates, and monetary autonomy; rather, it is constrained to choosing two of these three. …

… In the wake of the Great Recession, however, there has been an effort to address macroeconomic challenges through intermediate measures, such as narrowly targeted capital controls or limited exchange rate flexibility. This paper addresses the question of whether these intermediate policies, which round the corners of the triangle representing the policy trilemma, afford a full measure of monetary policy autonomy.Our results confirm that extensive capital controls or floating exchange rates enable a country to have monetary autonomy, as suggested by the trilemma. Partial capital controls, however, do not generally enable a country to have greater monetary control
than is the case with open capital accounts unless they are quite extensive. In contrast, a moderate amount of exchange rate flexibility does allow for some degree of monetary autonomy, especially in many emerging and developing economies.

The trilemma, also sometimes called the “impossible trinity”, is depicted in Figure 1 below: 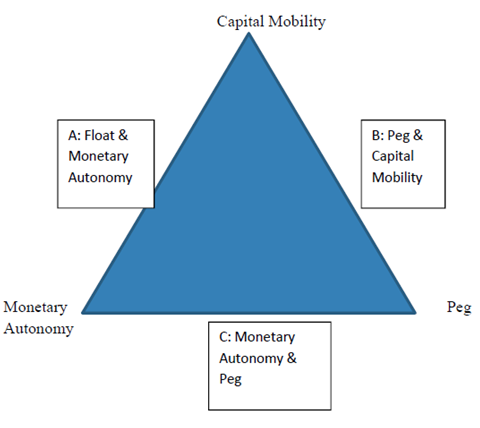 
Estimating the tradeoffs implicit in the trilemma has been undertaken in other work, including by myself with Joshua Aizenman and Hiro Ito. In our papers, we used the Chinn-Ito index [0] as our measure of capital controls (see [1] [2] [3]). Klein and Shambaugh use the Klein (2012) index of gates and walls. This measure distinguishes between (I) persistently open, (ii) intermittently open and restricted access, and (iii) persistently restricted access, and also uses a more detailed cataloguing of capital account measures to obtain somewhat their results, which finds more limited evidence of the insulating properties of intermediate capital control measures.

My comments are here.

Interestingly enough, the trilemma has made its appearance several times throughout this week at the Summer Institute. In Barry Eichengreen’s paper (“Does the Fed care about the rest of the world?”) on international coordination and crisis management and the Fed, concerns about the balance of payments deficit — implied by attempting to conduct an expansionary monetary policy under fixed exchange rate regime — were noted (and graphically illustrated in Figure 2 below). In his comments on Eichengreen’s paper, Larry Summers explicitly mentioned the constraints imposed by the trilemma. 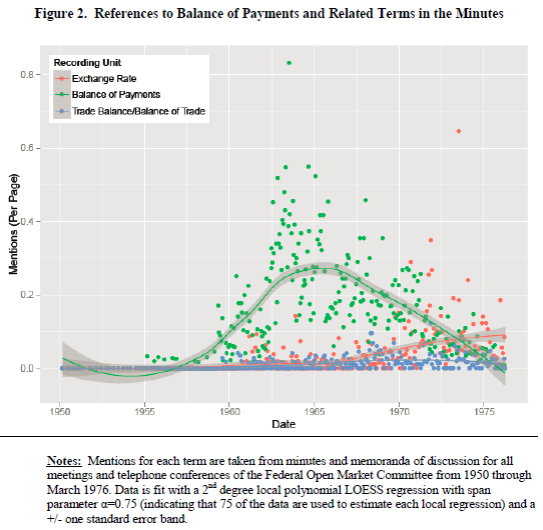 2 thoughts on “Assessing the Trilemma”