As the Fed sets in place the road map to withdrawing monetary stimulus, I wonder how it is that so many believed the Fed’s implementation of unconventional monetary policy would lead to surging high inflation. Examples include House Budget Committee Chair Paul Ryan, who stated in November 2008 2010:

I think it’s going to give us a big inflation problem down the road.

The source for the above statement, Reuters, also quotes Sarah Palin and Ron Paul.

Time to look back. Here are some graphs depicting inflation and inflation expectations as they evolved. 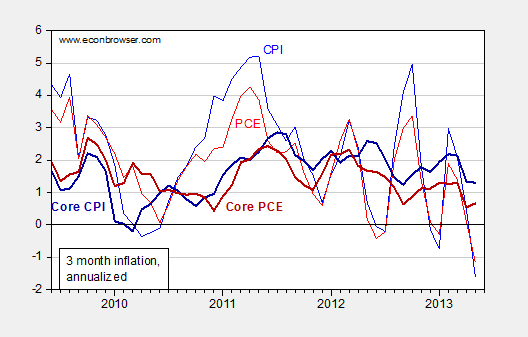 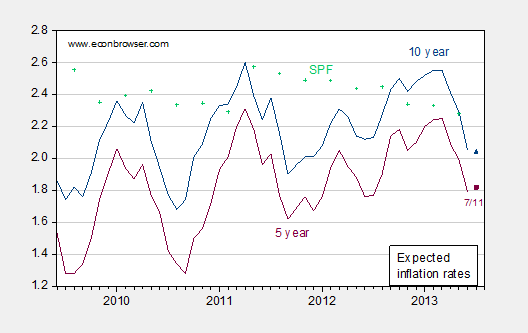 
The obvious point is that there has been little evidence of inflation “getting out of control”, even as several bouts of quantitative easing were undertaken. In fact, inflation and inflation expectations have been remarkably quiescent. Why were these people so mistaken? There are at least two competing explanations, consistent with the statements that were made, and the observations we have:

Both are plausible. The second possibility is more interesting to me (the first possibility is examined here). Why would these people wish interest rates to remain high? Perhaps they hoped that high interest rates would force a reduced level of government spending –- i.e., it would have “starved the beast”. In other words, instead of just cutting food stamps (SNAP) as the House is trying to do now (although not ag production subsidies [0]), even more swaths of the government could’ve been cut had monetary policy been less accommodative. Of course, the “starve the beast” hypothesis has had little empirical basis, as Jeff Frankel has pointed out (as well as Bruce Bartlett). But empirical evidence has not usually been marshalled on that side of the argument anyway.

A third argument, that Fed unconventional monetary policies were ineffective, and hence should not been undertaken, seems to run counter to recent empirical evidence indicating that the imminent cessation of QE has led to higher real interest rates (after all, if QE couldn’t push rates down, why should the mention of ending it pull rates up?). The increase in real rates since the Chairman’s June speech is depicted below in Figure 3: 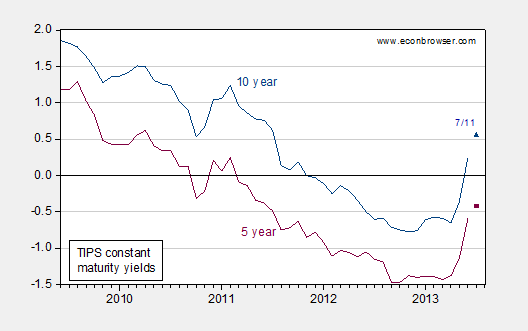 A final graph depicts money base and gold prices, for those who believe gold prices are a summary statistic for all things under heaven. 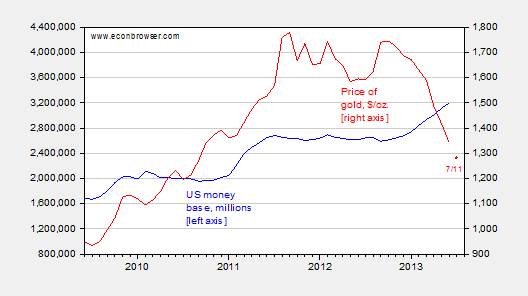 Figure 4: US money base, in millions of dollars (blue, left scale), and price of gold in London, 10:30AM, dollars per Troy ounce. Source: FRED.


Statements surrounding this graph I do think are more akin to the pure “tin-foil cap” sort (money base increase equals debasement; see this post).

44 thoughts on “What Were They Thinking?”