I’m just back from Japan, where disappointing GDP statistics have reinforced the fact that the economy is still far from full recovery.

However, like in the US, first reads on GDP statistics are often very noisy, so one shouldn’t get too worked up (while revisions have tended to be downward, post-2008, just like in the US, successful prediction of direction of and acceleration in growth has increased post-2008 [0]).
Still, with exports accounting for a notable share of growth [1] [2], this led me to wonder how much of the exchange rate depreciation that occurred several months ago has remained, and has led to declining export prices faced by other countries. From today’s WSJ RTE, “Prices for Imports From Japan Decline Sharply” (by E. Morath):

Import prices from Japan [to the US] declined 2.4% in July compared with a year earlier, the sharpest 12-month drop since December 2002, according to Labor Department data released Tuesday. The cost of imports from America’s fourth-largest trading partner have trended down for six consecutive months.


Prices U.S. consumers pay for imported computers, cars and other consumer durable goods — all products that are made in Japan — have fallen in the past year.

For more on exchange rate pass through, see here.


Figure 1 depicts the course of the exchange rate against the US dollar (down is a yen depreciation).
This depreciation is not merely a US-Japan phenomenon; the yen has also depreciated on a broad basis, as measured by the BIS’s nominal trade weighted (broad) index. 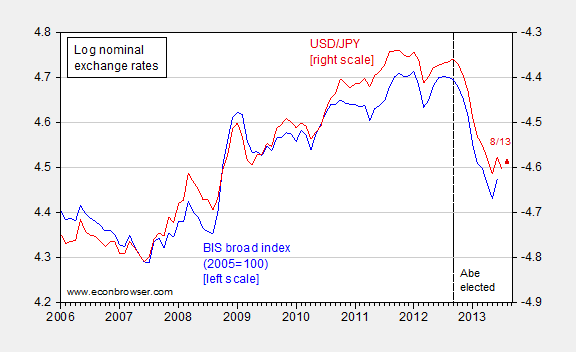 
Now, even with exchange rates moving, it is conceivable (although unlikely) that pass through into export prices would be zero. Profit margins or unit costs could rise to nullify the effect. The second effect in particular has been a worry as imported inputs — especially energy, post-Fukushima — are an important component of production costs (energy imports are typically denominated in dollars,
so a yen depreciation serves to increase unit costs). Apparently, the standard effect dominates in regard to exports to the United States.

How durable has the exchange rate depreciation been? Import costs today are a function of exchange rates in preceding months. Figure 2 shows the real value of the yen over a longer span of time, back to 1990. 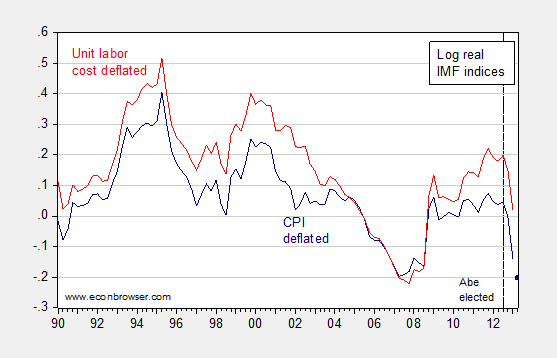 
The data suggest that the real effective exchange rate for Japan has depreciated by about 25% (log terms) since Abe’s election, at least using a CPI-deflated measure (and probably using a unit labor cost deflated measure as well [3].
In Chinn and Kamata (2013), discussed in this post from May, we estimated that holding feedback effects constant,
exports would be about 1.3 percentage points of GDP higher, for a persistent 20% depreciation. One would have to subtract out the increase in imports resulting from higher income to determine the resulting (smaller) increase in net exports. Going the other direction, if the multiplier is greater than one for net exports, then output would be higher yet again, relative to baseline.

Finally, I will note that things in Japan did seem a lot cheaper to me compared to my last visit to Japan fifteen years ago (!). And indeed, statistics — or at least Big Mac prices — confirm my impression. 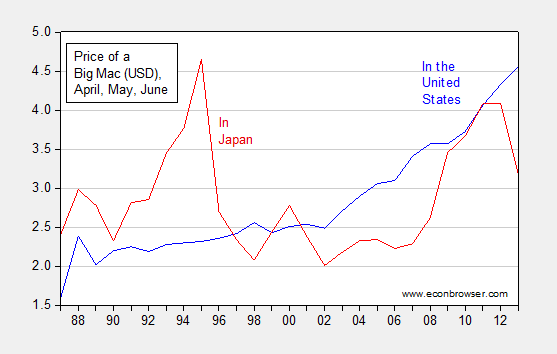 Figure 3: Price of a Big Mac ™ in United States (blue), and in Japan (red), in USD. Note: Surveys take place at irregular intervals, usually in April, May or June. Source: Economist.


While Japanese Big Mac’s are approximately 35% cheaper (in log terms) than a US Big Mac, as of June, that doesn’t necessarily mean that the yen is 35% undervalued (whatever that means). As I’ve noted before [4], the Penn effect implies a lower price level for a lower relative income, even for identical goods, given the presence of nontradable goods. In the sample I have (1987-2013, 24 med- to high-income countries, unbalanced sample), the slope coefficient is about 0.25 on relative per capita income expressed in PPP terms. With Japanese per capita income about 31% lower than US, then the yen is about 27% “undervalued”.

8 thoughts on “The Yen’s Progress and Japanese Exports”