Today we are fortunate to have a guest contribution written by Yin-Wong Cheung, Professor of International Economics at City University Hong Kong, formerly professor at UCSC, and Risto Herrala, economist at the Bank of Finland.

The recent years have been a frustration for anyone trying to make sense of China’s capital control policies. Capital controls have been an important part the Chinese economic policies since the communist revolution in 1949 but, after the reform and opening policies were initiated in the late 1970’s and China’s march back towards a market economy began, they appear more and more an anomaly. At present, the dominant view both among Chinese policy makers and analysts is that at some point the restrictions have to go. They are incompatible with the pursuit of a free market economy especially for a country with a leadership role in international commerce.


However, as with many other reforms, the chosen model of capital account liberalization has been baby steps. So far, the on-going millennium has been characterized by a long chain of small capital account liberalization measures, all of which have at least seemingly opened up some new channel for Chinese firms to transfer funds abroad or foreigners to invest in China. An important related development has been the emergence of Hong Kong as the hub of RMB trade abroad, where off-shore RMB can be deposited and freely traded. So, after all these developments, are the controls still effective? And if so, to what end?


To shed light on these issues, we study the covered interest differential (CID) between onshore and offshore RMB (the paper, working paper version). The CID is a much used measure of the effectiveness of capital account restrictions because it vanishes by arbitrage under free capital mobility. So, if we find that the CID is still large (in absolute value), we can be confident that capital account restrictions are binding, and the arbitrageurs have not yet had their day. 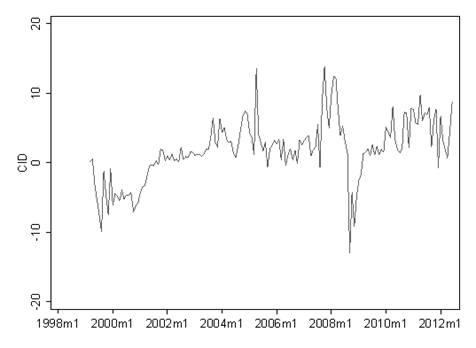 
This is, indeed, what we find. According CID graph, if anything, the CID seems to be getting larger, since it shows an increasing trend after the most likely regime shifts in the series are controlled for. The regime shifts mark milestones in Chinese monetary policy: around July 2005, China effectively shifted from a heavily managed fixed exchange rate policy towards the USD to a crawling peg, and around June 2008, in the midst of the global financial crisis, China re-instated its pre–2005 heavily managed exchange rate policy.


While the ‘whether’ question is therefore settled in the affirmative, the ‘why’ question is less straightforward to answer. We approach this issue by first testing the power of the usual explanatory variables which proxy the intensity of capital account restrictions, country risk, exchange rates and trade. Of such variables, the CID reacts significantly only to changes in exchange rates: it is increasing in exchange rate volatility, and decreasing in the nominal effective exchange rate. These findings suggest that the CID is more closely linked to financial rather than real developments.


An alternative view on the issue has, however, recently been proposed by Jeanne (2012), who shows that capital account restrictions gives effects similar to those of trade protectionism measures. Capital account restrictions could be used to undervalue a currency by restricting capital flows inwards thereby contributing to an increase in competitiveness of Chinese firms. Interestingly, such a scheme has implications regarding the CID which we can test. The tell-tale signs of such policies are, a positive CID (which we find), an undervalued currency, and tightness of credit conditions within China. The theory therefore provides an explanation of our finding of a significant negative link between CID and the nominal effective exchange rate. By including alternative credit market tightness indicators as explanatory variables of the CID, we are also able to confirm the theoretical prediction of a significant positive link between the CID and credit market tightness within China.


Apparently, China still considers capital control policy to be an indispensable tool to manage and stabilize the economy. However, the estimation results support the criticisms that use of capital controls to restrict capital inflows and thereby undervalue the RMB comes at high cost. It is at variance with the goal to develop the domestic economy, since it depresses credit availability within China. The question is therefore not whether to reform; the relevant questions are on the speed and the extent of the reform program under the new government.

This post written by Yin-Wong Cheung and Risto Herrala

5 thoughts on “Guest Contribution: “Are Chinese Capital controls still binding and if so, to what end?””