Today we are fortunate to have a guest post written by Yuriy Gorodnichenko (UC Berkeley).

Ukraine is living through most trying times: Maidan protests, snipers killing dozens of unarmed protesters, the fall of Viktor Yanukovych’s regime, near-default of the government, Russian annexation of Crimea, and Russian-sponsored separatist mutiny in Ukraine’s East. With the victory of the February revolution, the new government, and the new elected president Petro Poroshenko, Ukraine has solved some of its political problems but it continues to face a number of challenges on its path to building a successful democratic country.

The backbone of this success has to be good economic performance, and so a crucial question is whether Ukraine’s economy will rebound from recent setbacks. A month ago, the International Monetary Fund (IMF) gave a US$17 billion emergency loan which also unlocked loans and aid (in total close to what the IMF loaned) from other donors—individual countries (e.g. U.S., EU) and multinational agencies (e.g. EBRD). These resources can backstop Ukraine from collapsing due to short-term funding problems such as decreased fiscal revenues, depleted foreign reserves, and an economic recession. However, this support will be wasted unless Ukraine experiences robust economic growth in the medium run. In this post, I outline the key forces that, I believe, will shape the economic future of Ukraine over the course of the next ten or so years as well as discuss potential risks that can stall Ukraine’s development.

What will determine growth in Ukraine?

In short, four factors will play a key role:


Below I discuss each of these factors in turn.

Proximity to the EU and association agreement with the EU. Ukraine is close to one of the largest markets in the world. A truck can cover the distance from Kiev to Berlin in less than 14 hours. In contrast, it takes about 30 days to ship a container from China to Hamburg. Hence, Ukraine has an important edge over other potential exporters to the EU as it can deliver goods much faster and cheaper. In addition, when the association agreement takes full force, which can happen as early as this summer, trade costs between Ukraine and the EU are going to fall nearly to zero. While in the short run the quality of goods produced in Ukraine may be inferior—thus making penetration of the EU market more difficult—Ukrainian goods will have a significant price advantage. Furthermore, EU firms will have strong incentives to invest in Ukraine to export goods back to the EU thus bringing technology closer to EU standards. Reduced trade barriers with the EU could also lead to a boom in the export of services (e.g., transportation, IT). 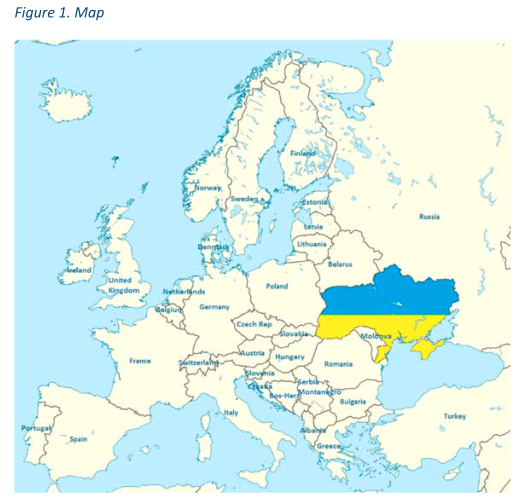 Low wages and educated workforce. Ukraine has some of the lowest wage rates in Europe but at the same time the workforce is quite educated with the average years of schooling similar to those in Germany (see Table 1 below). Thus, labor in Ukraine is cheap but skilled. Indeed, Ukraine ranks fourth in the world in number of certified IT professionals (after the US, India, and Russia) and has a full cycle of aerospace hardware engineering and production (e.g., Zenit-3SL, rockets used in Sea Launch, are designed and produced in Ukraine). These conditions combined with the proximity to the EU should stimulate a massive inflow of foreign direct investment in a broad spectrum of labor-intensive industries spanning anything from textile to IT and aerospace design.

Rich resources. As global population and incomes grow, food prices are likely to remain high for the foreseeable future. The recent experience is certainly consistent with this prediction: food prices have more than doubled since 2000. With over 300,000 sq. km of arable land, 30% of the world’s richest black soil, cheap labor and proximity to the EU, Ukraine’s agricultural industry has a huge potential. Ukraine is already the world’s largest producer of sunflower oil but it’s likely to play an even more dominant role in agricultural business in the future. Historically, the productivity in Ukraine’s agriculture has been low (e.g., cereal yield is one of the lowest in Europe) but this could change dramatically with the adoption of better technologies (e.g., fertilizer consumption per hectare is 33 kg in Ukraine and 211 kg in Germany).

Ukraine also has deposits of iron ore (#6 producer in the world), manganese ore (#8 in the world) and coal (#12 in the world). The geographical proximity and richness of the deposits will continue to provide the steel industry in Ukraine with a competitive advantage.

Catch-up, governance and corruption. Starting from a low base, poor countries tend to grow faster than rich countries because they accumulate capital (physical and human) and copy frontier technologies rather than develop them. This is why countries like China and Poland have shown high growth rates in recent decades thus converging to the high living standards of rich countries. This convergence in many ways is a natural force. Yet, Ukraine has failed to use this force and now Poland has income per capita three times larger than that of Ukraine even though Ukraine and Poland started with almost identical initial conditions in the early 1990s (see Figure 2). More than 20 years since the start of the transition to a market economy, Ukraine has still not reached the level of income it enjoyed in 1989. This failure is almost certainly determined by poor governance and rampant corruption. 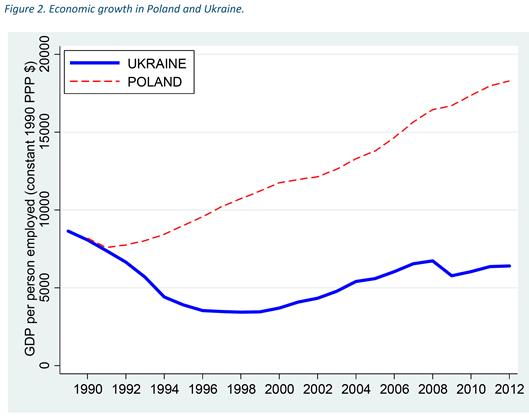 A few statistics reported in Table 2 paint a dismal picture for Ukraine. For example, according to Transparency International, it is the most corrupt country in Europe. Likewise, Ukraine has more regulations than many other countries in Europe. To a large degree, the Maidan protests were about uprooting corruption and allowing a freer life for people and businesses. Given enormous public demand for clearing out bribery and regulatory morass, Ukraine is likely to see major improvements in these areas. While fighting these evils is always difficult, the experience of Georgia, which was the most corrupt European country in 2003, shows that countries can enhance their governance even over relatively short periods of time.

There is a strong negative correlation between the quality of governance and economic growth: a 1% reduction in corruption increases economic growth by 0.72%. Because this relationship is probably causal, by emulating anti-corruption and deregulation reforms in Georgia and other countries, Ukraine can unleash its huge economic potential.

The main economic risks for Ukraine stem from the political factors. What will be the price for Russian natural gas? How will the unrest in the East of Ukraine affect economic growth? What happens if Ukraine’s exports to Russia are banned? Can the new president deliver reforms so much demanded by the public in Ukraine? These are obviously formidable challenges but they are certainly “solvable” in the medium run.

First, Ukraine is likely to get a lot of support from the European Union in handling gas negotiations with Russia as well as diversifying its gas supplies. For example, Ukraine can already bypass the highest-in-Europe gas price by importing Russian gas via Slovakia. This source is still more expensive than one may have expected Ukraine to pay but it greatly limits the risk of a devastating shutdown of gas supply from Russia. In addition, Ukraine continues to be the most important transit route for Russian gas to the West and the prospect of completely shutting down gas supplies is minimal: Russia is unlikely to survive without the revenue it generates from exporting oil and gas to the West; even a recent deal with China is not going to change this dependence. Finally, Ukraine has large deposits of shale gas and, with foreign investment, it could become self-sufficient in 5 to 10 years.

Second, the Russian media portray the unrest in Ukraine’s East as a civil war but polls run by reputable survey agencies demonstrate minimal support for secession movements there. Furthermore, the escalating violence of separatists in the East is turning away even their previous supporters. For example, even Ukrainian oligarchs from the East who, in an attempt to extract concessions from the central government in Kiev, previously declined to take sides now publicly denounce separatists and call for more proactive and aggressive actions of the central government to remove separatists and return to peace. Without strong local public support, this unrest is doomed. Resolving this problem may take time, but it seems unlikely to drag on for years.

Third, Russia has been using its economic power to influence Ukraine, Georgia and Moldova. However, it seems unlikely that Russia can completely substitute away from Ukraine in the medium run. The countries are tightly integrated and imposing tough sanctions on Ukraine is likely to backfire for Russia. For example, the majority of engines for Russian helicopters is designed and produced in Ukraine. In a way, Russia is unlikely to ban trade with Ukraine for the same reason Europeans are reluctant to impose tough sanctions on Russia.

Fourth, Ukraine’s main challenge, I believe, is in whether the new government can deliver reforms. Without strong economic performance in the next few years to prove the correctness of the political and economic course of Maidan, political divisions are likely to intensify thus slowing down the pace of reforms and potentially generating a wave of revanchism in Ukraine. However, a key difference between the February revolution in 2014 and the Orange revolution in 2004 is that now the public understands the importance of monitoring the government much better. If the new president or another elected official is going to continue business as usual, soon he or she is almost certainly going to face the destiny of Victor Yanukovich.

In the last six months, Ukraine had both a great victory (the February revolution) and a great humiliation (Russian annexation of Crimea). After these pivotal events, two paths are open for Ukraine: cease to exist as a state or get immunity from corruption, unite, and become a successful country. Given overwhelming public support for unity and reforms in Ukraine, I believe the second option is likely to be the case. Ukraine has a real chance to be a growth miracle in the next decade and may grow as fast as 7 percent per year, the rate at which Georgia grew after its Rose revolution and subsequent reforms.

Obviously, Ukraine faces many challenges and the risks are high. On its precarious path to a just and free society, Ukraine will need strong support from the West. As I argued elsewhere, it is in the best interest of the West to help Ukraine and to make the February revolution a success. Otherwise, the world may see another iron curtain in Eastern Europe with rising tensions and conflicts as well as a prospect of arms race on a global scale.