The “Federal Reserve Accountability and Transparency Act of 2014”, introduced into Congress on July 7, requires the Fed to adopt a policy rule. It actually specifies two rules. The “Directive Policy Rule” would be chosen by the Fed, and would describe how the Fed’s policy instrument, such as the federal funds rate, would respond to a change in the intermediate policy inputs, presumably inflation and one or more measures of real economic activity such as the output gap, the unemployment rate, and real GDP growth. If the Fed deviated from its rule, the Chair of the Fed would be required to testify before the appropriate congressional committees as to why it is not in compliance. In addition, the report must include a statement as to whether the Directive Policy Rule substantially conforms to the “Reference Policy Rule,” with an explanation or justification if it does not. The Reference Policy Rule is specified as the sum of (a) the rate of inflation over the previous four quarters, (b) one-half of the percentage deviation of real GDP from an estimate of potential GDP, (c) one-half of the difference between the rate of inflation over the previous four quarters and two, and (d) two. This is the Taylor rule, and is obviously not chosen by the Fed. John Taylor has recently discussed this proposed legislation on his blog and in Congressional testimony.

What is the justification for using the Taylor rule as the Reference Policy Rule? We recently presented a paper, “Deviations from Rules-Based Policy and Their Effects,” at a conference on “Frameworks for Central Banking in the Next Century” at the Hoover Institution. Using real-time data on inflation and the output gap from 1965 – 2013, we calculate policy rule deviations, the absolute value of the difference between the actual federal funds rate and the rate prescribed by (1) the “original” Taylor rule described above, (2) a “modified” Taylor rule with a coefficient of one, instead of one-half, on the output gap, and (3) an “estimated” Taylor rule from a regression of the federal funds rate on a constant, the inflation rate, and the output gap. We use the shadow federal funds rate in Wu and Xia (2014) to capture the effects of unconventional monetary policy after 2008. The estimated Taylor rule has almost the same coefficients on inflation and the output gap as the original Taylor rule, but a lower intercept, which is consistent with either an inflation target higher than two or a lower equilibrium real interest rate. Janet Yellen has expressed her preference for the modified Taylor rule over the original Taylor rule. 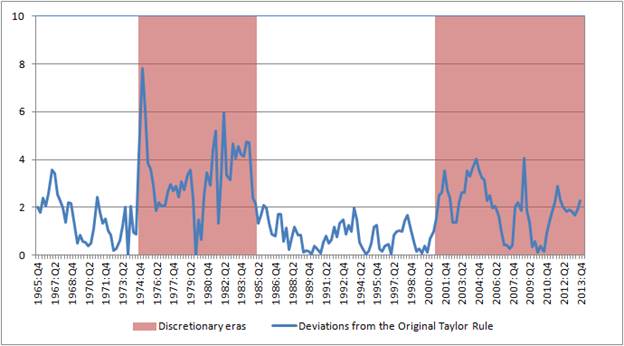 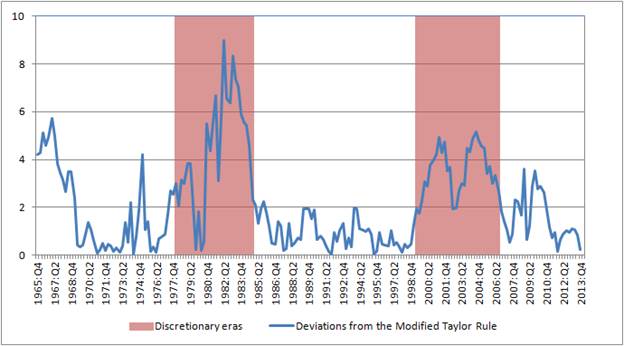 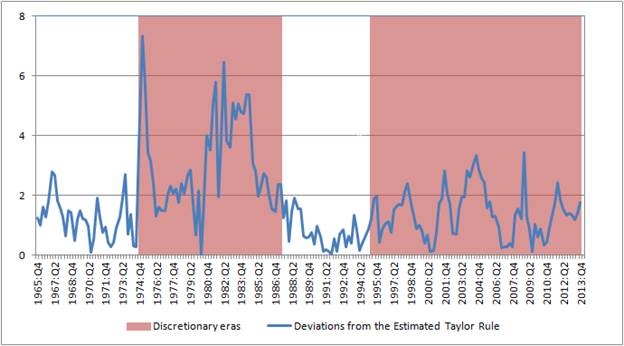 We proceed to analyze the effects of deviations from rules-based policies by comparing the economic performance between our rules-based and discretionary eras. Using six loss functions involving inflation and unemployment: Okun’s misery index, a linear absolute loss function, and four quadratic loss functions, we show that economic performance is uniformly better in rules-based than in discretionary eras. The results, reported in Columns 1 and 2 of Table 1, hold for all three rules and are robust to specifications of quadratic loss functions that put greater weight on either inflation or unemployment loss and to a specification that puts all weight on inflation loss. 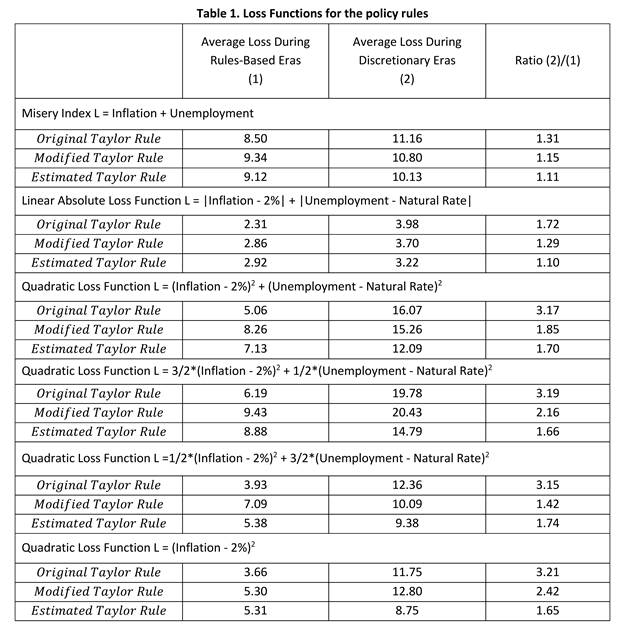 While economic performance is always better in rules-based eras than in discretionary eras, the effects of the deviations differ systematically among the rules. The ratio of the loss during discretionary eras to the loss during rules-based eras is reported in Column 3 of Table 1. The loss ratio is largest for the original Taylor rule, next largest for the modified Taylor rule, and smallest for the estimated Taylor rule. The results in Table 1 are robust to deleting the periods when Paul Volcker raised the federal funds rate more than two percentage points above the Taylor rule benchmark in order to bring down inflation and restore Fed credibility, which arguably should not be classified as part of the discretionary eras. Using the original Taylor rule as a benchmark provides the sharpest evidence of the negative effects of deviating from policy rules.

How does this relate to the proposed legislation? Our evidence that, regardless of the policy rule or the loss function, economic performance in rules-based eras is always better than economic performance in discretionary eras supports the concept of a Directive Policy Rule chosen by the Fed. But our results go further. The original Taylor rule provides the strongest delineation between rules-based and discretionary eras, making it, at least according to our metric and class of policy rules, the best choice for the Reference Policy Rule.

In the current political climate, the proposed legislation will inevitably be interpreted in partisan terms because it was introduced in the House Financial Services Committee by two Republican Congressman. Not surprisingly, the first reporting on the legislation by Reuters was entirely political. This is both unfortunate and misleading. We divided our rules-based and discretionary eras with the original Taylor rule between Republican and Democratic Presidents. If we delete the Volcker disinflationary period, out of the 94 quarters with Republican Presidents, 54 were rules-based and 40 were discretionary while, among the 81 quarters with Democratic Presidents, 46 were rules-based and 35 were discretionary. Remarkably, monetary policy over the past 50 years has been rules-based 57 percent of the time and discretionary 43 percent of the time under both Democratic and Republican Presidents. Choosing the original Taylor rule as the Reference Policy Rule is neither a Democratic nor a Republican proposal. It is simply good policy.