The second quarter of 2016 is now more than half over, but we won’t receive the first reading on 2016:Q2 GDP from the BEA until the end of July. A forecast of something that is happening right now is sometimes described as a “nowcast”. The Federal Reserve Banks of New York and Atlanta are providing a valuable service by publishing continuously updated nowcasts of GDP. But what should we do if they’re giving us rather different numbers?

Right now the Atlanta Fed’s nowcast is calling for second-quarter real GDP growth of 2.5% at an annual rate while the New York Fed says 1.7%. That’s actually a smaller disagreement than the two models began with on April 29, when the advance estimate of first-quarter GDP was first released. At that date the Atlanta model was anticipating 1.8% second-quarter growth while the New York model was only predicting 0.8%.

From that starting point, both models then process every major new piece of data as it comes in. Based on the historical correlation between each new measure and any variables of interest both models generate a continuously updated assessment of everything that might matter for the current values of all the variables that we observe. For example, the New York Fed GDP nowcast was lifted up by the solid reports on retail sales and industrial production and capacity utilization for April. 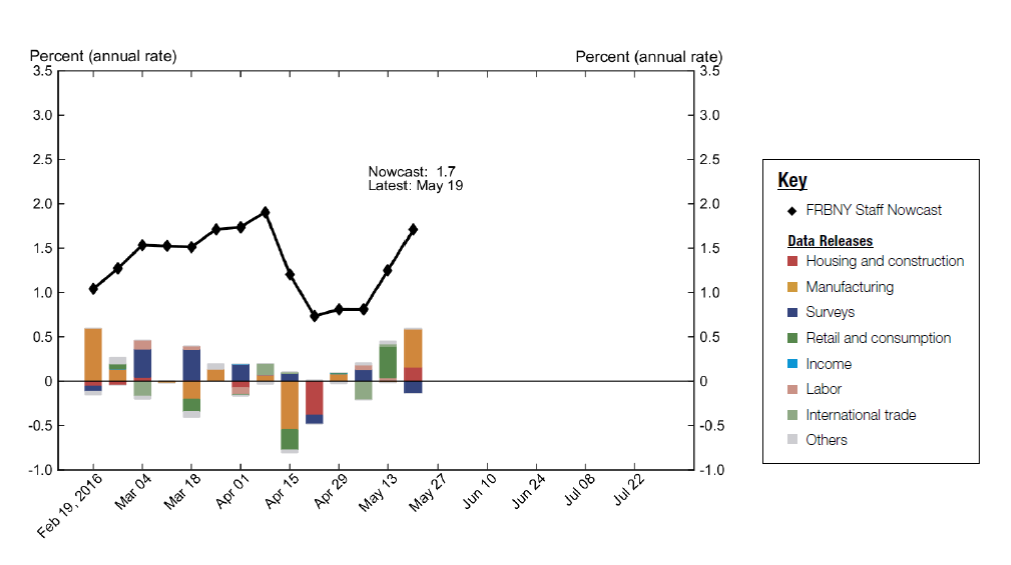 The retail sales report was also the biggest single factor that lifted up the Atlanta nowcast. 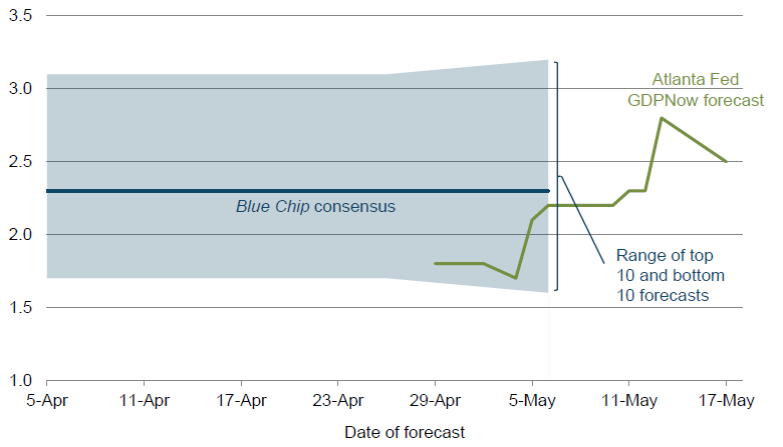 A lot of economic research suggests that one of the best ways to reconcile conflicting forecasts is simply to go with their average, which in this case would be 2.1%. For that matter we might want to also throw in the pre-quarter Blue Chip consensus forecast (2.3%), Wall Street Journal survey of economic forecasts (2.2%), or the Survey of Professional Forecasters (2.1%), which all give us pretty much the same number as the average of the two Fed nowcasts.

In any case, the record of the large-data processing algorithms like those of either the New York or Atlanta Fed is that by the middle of July (a few weeks before the advance release of the Q2 GDP numbers) we should have a pretty good idea of what the BEA is going to tell us.