On the release of the Productivity and Costs release, the WSJ reports “Weak Productivity, Rising Wages Putting Pressure on U.S. Companies: Economists fret how trends may affect inflation and broader growth”.

When wage compensation outruns productivity, the result is an acceleration in labor costs per unit of output. In the first quarter, those costs rose 4.5% at a yearly rate and 3% from a year earlier. If companies can’t boost productivity, they must either absorb the costs in their profit margins or raise prices.

Corporate profits are being squeezed as a result, and the worry is that companies will slow hiring and further slash spending.

A different worry for the Fed is that firms will react to higher labor costs by raising prices, pushing inflation above the central bank’s 2% target.

I don’t disagree, but I think these developments can be cast in a slightly different light.

Consider the price level. By definition:

if the markup is constant. π is the inflation rate. The key issue is the constancy of the markup. 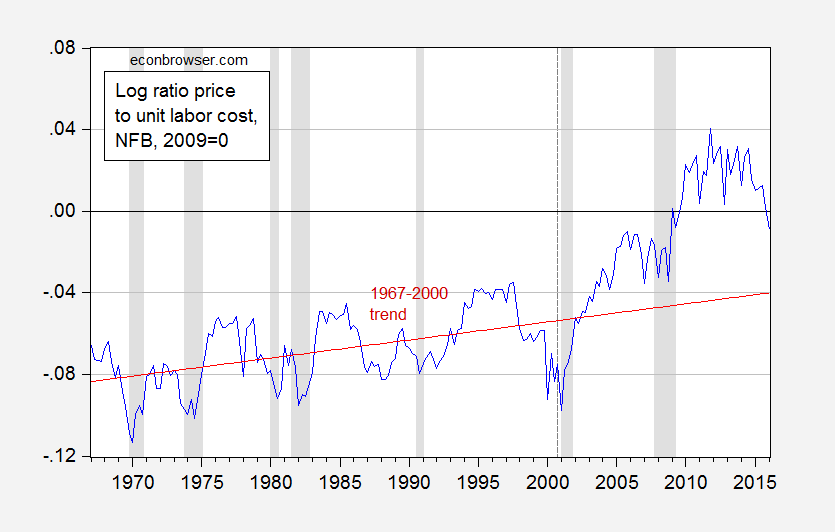 There is a linear trend in the ratio until 2000, at which time there appears to be a break in the relation; the price level rises relative to unit labor cost, i.e., the markup increases. One can loosely interpret this as a rise in capital’s share (in fact, this variable is the exact inverse of the labor share of the NFB as calculated in the Productivity and Cost release).

More formally, over the 1967-2000 period, (log) price and unit labor costs are cointegrated (according to the Johansen maximum likelihood cointegration test, allowing for a linear trend in the data). The cointegrating vector is (1 -1.02), borderline significantly different from (1 -1).

Over this period, unit labor costs adjusts to the disequilibrium, while the price level does not.

Obviously, unit labor costs cannot continue to rise faster than prices indefinitely. However, there is some way to go before the ratio converges to the 1967-2000 trend.

So…one way to interpret the recent slowdown in productivity, acceleration in compensation growth, in the presence of quiescent inflation is that it represents a reversal of the deviation that started in the early 2000’s.

For reference, here are the inflation rates (measured using the implicit price deflator) for the nonfarm business sector. 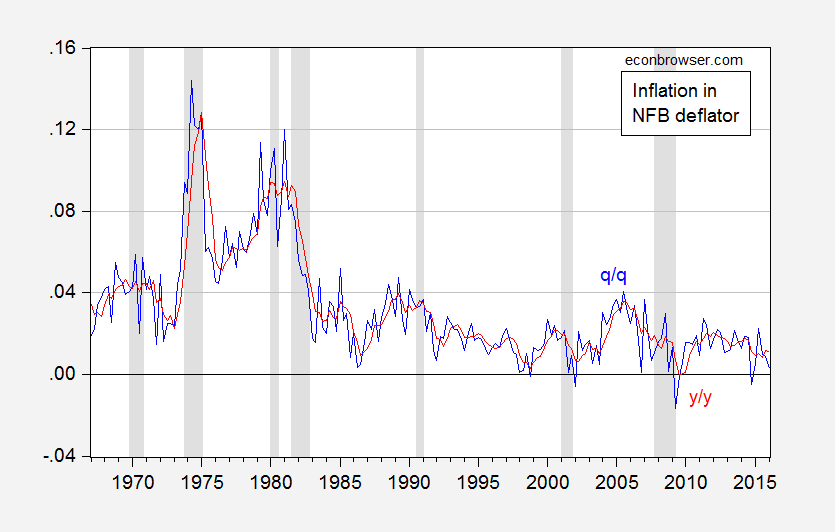 Digression: The Heritage Foundation’s James Sherk has recently argued that real compensation and productivity track each other very well, and presents this graph to prove his point. (He argues that other studies have inappropriately used differing deflators and measures with different sectoral coverage to obtain misleading inferences.) Clearly, my conclusions shown above are at variance with Mr. Sherk’s conclusion. What’s going on?

Using quarterly data over the same sample (extended to 2016Q1), and a different (log) scale, I show that a gap has widened between the two series, even for the NFB sector, and using the same deflator. 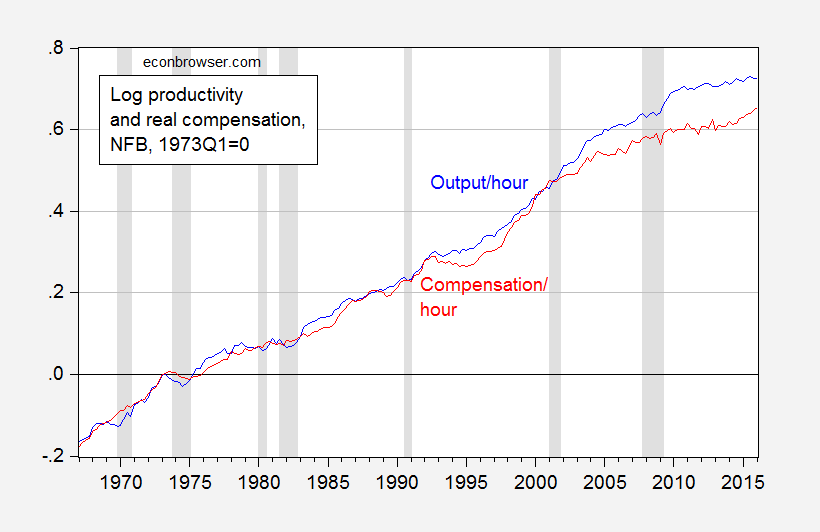 29 thoughts on “Thinking about Wages, Inflation and Productivity… and Capital’s Share”