I think one of the things that the struck me in this portion of the conference was the magnitude of the profession’s shift in the view of how trade affects both growth and the distribution of income. The first time I taught international trade 23 years ago, there was little academic debate over whether it made sense to pursue trade liberalization. Now, when I teach international trade, issues of income distribution and inequality are front and center. Another development that I found remarkable was that the general agreement that the standard trade measures – from trade adjustment assistance to tariffs – as implemented have had little impact on mitigating the negative effects of trade competition on labor. On the other hand, the debate over what proportion of the increase in inequality is attributable to technology versus trade continues, with I think the view that the majority is ascribable to technological progress persists.

To begin with, Nina Pavcnik’s paper, The Impact of Trade on Inequality in Developing Countries:

Frictions that impede workers from moving across industries, firms, or locations are a continuing theme in the developing country context, shaping trade’s uneven impact. Consequently, trade influences worker earnings through several factors: industry affiliation, firm affiliation, and location of residence all play a role in shaping trade’s impact on inequality. Individual demographic characteristics––especially age and education––also play a role, in part because younger and more educated individuals tend to more easily adjust to changes in trade.

Effects of trade on earnings are geographically concentrated and uneven within a country, depending on the region’s exposure to import and export shocks. Why are the effects of trade concentrated in local labor markets? Part of the answer is low and imperfect inter-regional worker mobility, especially in the short run after large adverse trade shocks.
Overall, the effects of trade on poverty and earnings inequality, through earning and employment, are context specific. They depend on the nature of trade policy changes or trade patterns and the mechanisms involved; on the mobility of workers and capital across firms, industries, and geographic locations; and the position of affected individuals in the income distribution of a country. As the reforms in India, Vietnam, China, and Brazil illustrate, focusing on how workers are affected by trade beyond formal manufacturing – including in agriculture, services, and the informal sector – is key in this assessment for developing countries.

David Dorn’s discussion highlighted the various dimensions of inequality, including gender. Perhaps the most remarkable point was the summary of how trade adjustment assistance, at least implemented thus far, had not thus far compensated workers by anything close to the typical loss associated with trade related job dislocation.

In the Panel on the Changing Landscape of International Trade, Ann Harrison’s presentation covered several points, but three that were notable were (1) import competition by Chinese imports is associated by more extreme (right or left) political positions, and (2) wage pressure is greater for workers engaged in routine tasks, and (3) multinational employment losses are most associated with the decreasing costs in capital (i.e., computers). In sum, international trade is important, but trade is not everything.

Catherine Mann’s remarks covered some similar topics, but from different methodological perspectives. The first observation was that the growth rate of trade-to-GPD has decelerated; the second that global value chains have retrenched; third, technology accounts for the bulk of the decline in manufacturing employment; and fourth, declines in manufacturing are associated with increases in regional inequality.

The third point echoes the long standing view in the trade literature. However, it was (to me) surprising to see the finding forwarded in such a graphically blunt fashion. 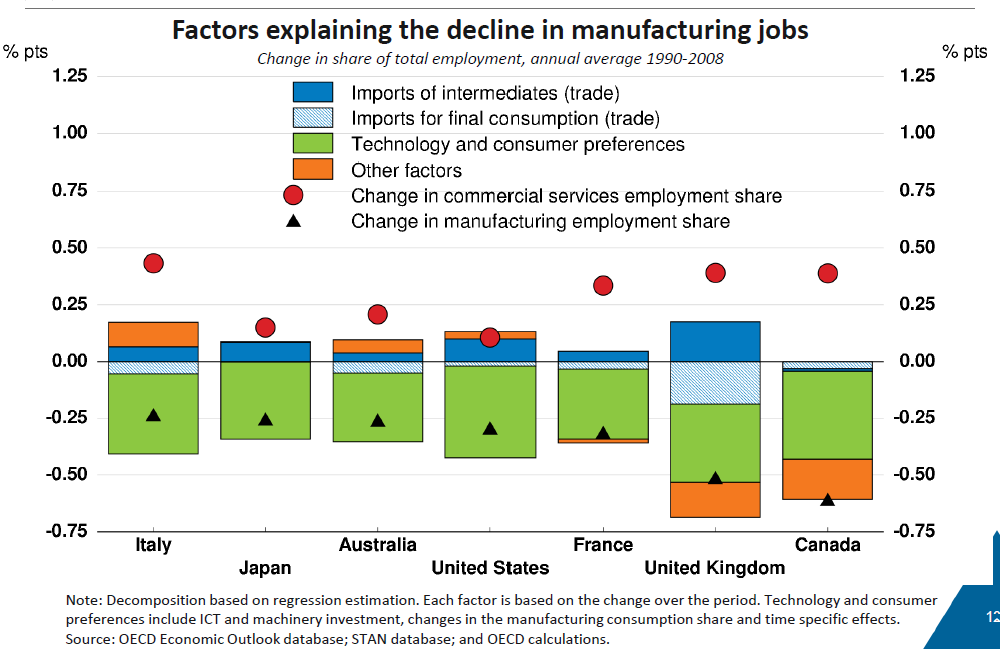 The decomposition attributes the components depending upon how well the proxy variables … proxy; and whether for instance the proxy variable for technology is unrelated to trade (i.e., is the use of ICT independent of trade competition). Notice, as has often be observed, lower cost imported intermediate goods can boost manufacturing employment (something the Trump administration should remember as it considers protectionist measures).

Peter Schott highlights the large impact on manufacturing starting with the granting of permanent Normal Trade Relations (PNTR) to China in 2000, which decreased uncertainty regarding Chinese access to US markets. The geospatial implications are illustrated in this map of exposure: 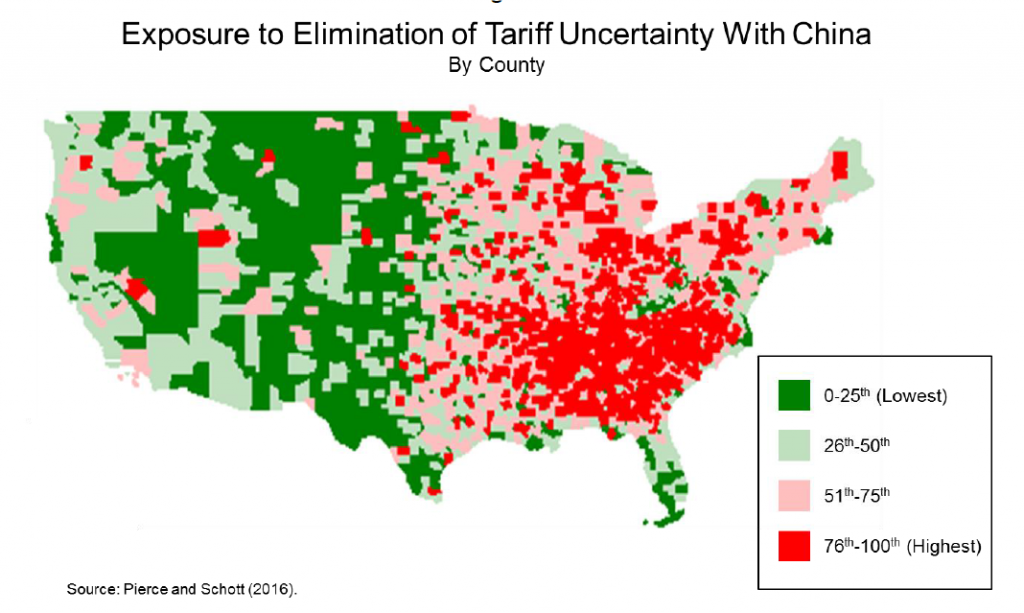 The concentration of geographical impact is particularly important because of frictions in labor adjustment.

Assessing the economic impact of Brexit is on one level incredibly simple. The EU has been able to radically reduce trade costs between its 28 Member States. This is only partly through reduced tariffs: it has been mainly through reducing non-tariff barriers. The Single Market is a mechanism for having common regulations so that goods and services can be traded easily throughout the bloc of half a billion people. This is facilitated, of course, by the free movement of labor which is particularly beneficial for services.

The Single Market is a work in progress, but its historical success in raising trade levels amongst its members is not in serious doubt.

So when the UK does leave, it will inevitably face higher trade costs with the rest of the EU compared to staying in. Since the UK will remain geographically close to the EU (even Boris Johnson can’t shift plate tectonics), Britain will suffer increased costs with countries it will continue trading with. High continued trade is a result of the “gravity” relationship which is perhaps the most robust fact of the economics of empirical trade. It is simply the observation that 3 countries who are geographically close trade more with each other than those who are geographically distant.

The reduced amount of fiscal transfers from London to Brussels is peanuts by comparison with this trade loss.

So the real issue of Brexit economics is not whether there will be a cost, but rather how big this cost will be and how much the damage from less trade can be limited.

In his dynamic estimate, the income loss is 6.3-9.6%. ‘nuff said, especially since the less educated and lower income households are unlikely to benefit from the segmenting the UK economy from the EU.

My takeaways from this portion of the conference:

As an aside, during a lunchtime conversation, I thought back to why in 2000, when approval of PNTR for China was occurred, I thought this event was going to be a big net plus. I still think it provided big net gains to the US economy as a whole, but I underestimated the extent to which it would be difficult for labor in particular to adjust to the shock arising from Chinese import competition.

8 thoughts on “Thoughts on Trade, Growth and Inequality from “Fostering a Dynamic Global Economy””