One of the most interesting papers presented at the Jackson Hole conference was written by Alan Auerbach and Yuriy Gorodnichenko, entitled Fiscal Stimulus and Fiscal Sustainability.

A key takeaway is that fiscal stimulus, during a slump, is likely to reduce — rather than raise — the debt to GDP ratio. This point is highlighted in Figure 3 in the paper, which shows impulse response functions for a shock to government spending. 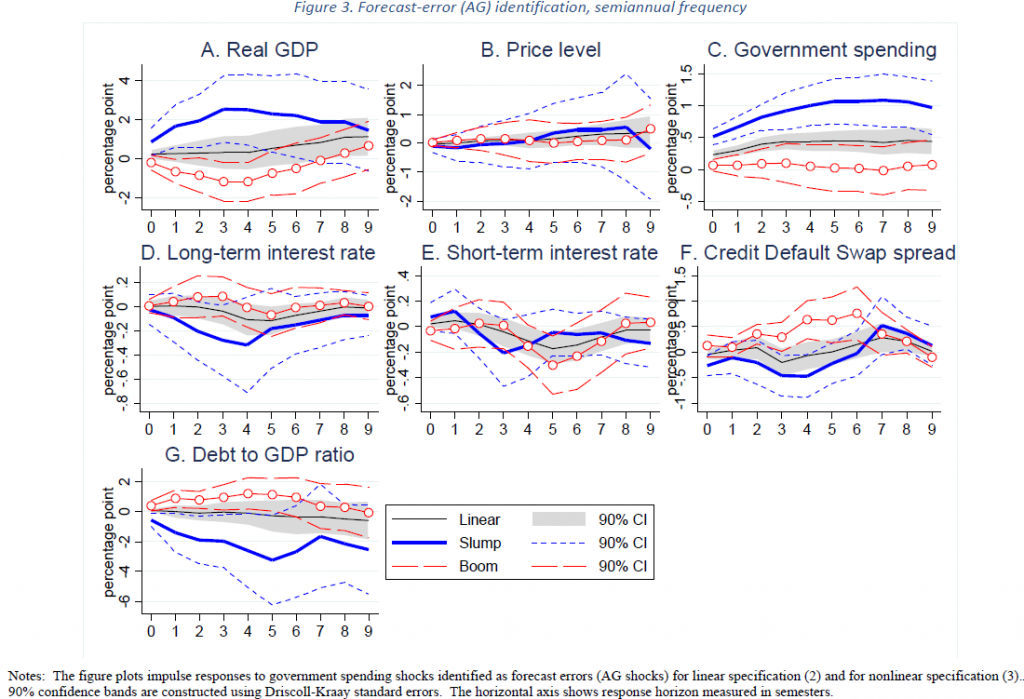 The red line indicates the debt-to-GDP ratio rises if there is a positive spending shock during a boom. The blue line indicates the ratio falls during a slump. The 90% confidence interval indicates this latter effect is statistically significantly different from zero for up to a year and a half (the frequency is semi-annual). This occurs partly because of the strong government spending multiplier effect that shows up during slumps, discussed in this post.

Interestingly, credit default spreads also decline, as do long term interest rates — although these effects are not significant at the 90% level.

So what remains of the idea of contractionary fiscal expansion? I’d say that the results put yet another nail in the coffin in the idea that typically fiscal contractions lead to economic expansions. However, as came out in the Q&A session, it is possible that expansionary contractions might be more plausible for highly indebted economies. But that’s a big if.

Jason Furman’s excellent discussion of the Auerbach-Gorodnichenko paper concludes that if a recession is severe, one cannot afford to not undertake fiscal expansion. In fact, fiscal space is irrelevant to the question of whether to stimulate or not under such conditions (assuming debt is not too high).

In other words, the people who argued against the ARRA in 2009, and for austerity in the GIIPS, should definitely read this paper. (In case you forgot, that includes Casey Mulligan, Ed Lazear, Keith Hennessey, and Richard Posner, among others.)

By the way, the results also suggest that a big fiscal expansion (tax cuts, defense boost?) at full employment is ill-advised.

[The next post will cover the trade/growth/inequality discussion at Jackson Hole.]