And a funny choice of citations.

The CEA released its first “report” under the leadership of Kevin Hassett. The report, entitled The Growth Potential of Deregulation, is summarized thusly:

Excessive regulation is a tax on the economy, costing the U.S. an average of 0.8 percent of GDP growth per year since 1980. This taxation by regulation has increased sharply in recent years, with approximately 500 new economically significant regulations created over the last eight years alone. Through a thorough review of the literature, the Council of Economic Advisers (CEA) finds that deregulation will stimulate U.S. GDP growth.

Interestingly, the report’s highlighted number is based on this paper:

Coffey et al. (2016) estimates that if we held fixed the number of industry relevant regulations at levels observed in 1980, the U.S. economy would have been about 25 percent larger (roughly $4 trillion) in 2012. According to the study, the cumulative effects of regulation have slowed economic growth in the United States by an average of 0.8 percent per year since 1980. This amounts to a loss of approximately $13,000 per capita.

In other words, the one quoted definitive number regarding output growth is drawn from an unpublished working paper. Now, endogenous growth models are not my specialty, but my impression is that the empirical evidence in favor of endogenous growth models is not overwhelming. The estimation approach is Bayesian, involving a nonlinear equation (as far as I can tell). My experience with estimating nonlinear equations is that they are sensitive to assumptions and starting points. It is interesting to note the several industries where under the counterfactual of no regulation, investment is lower than actual. Perhaps more interesting is the fact that only in 2008 does the actual level of GDP fall below the lower bound of the 90% confidence interval. In other words, 28 years after the simulation begins, output is significantly below predicted under the counterfactual. It’s troubling that the fall occurs in the year in which the economy suffers a major recession. This suggests that the deviation is due to model misspecification (i.e., the model cannot capture the dynamics of the recession) rather than necessarily regulation induces a deviation from predicted. 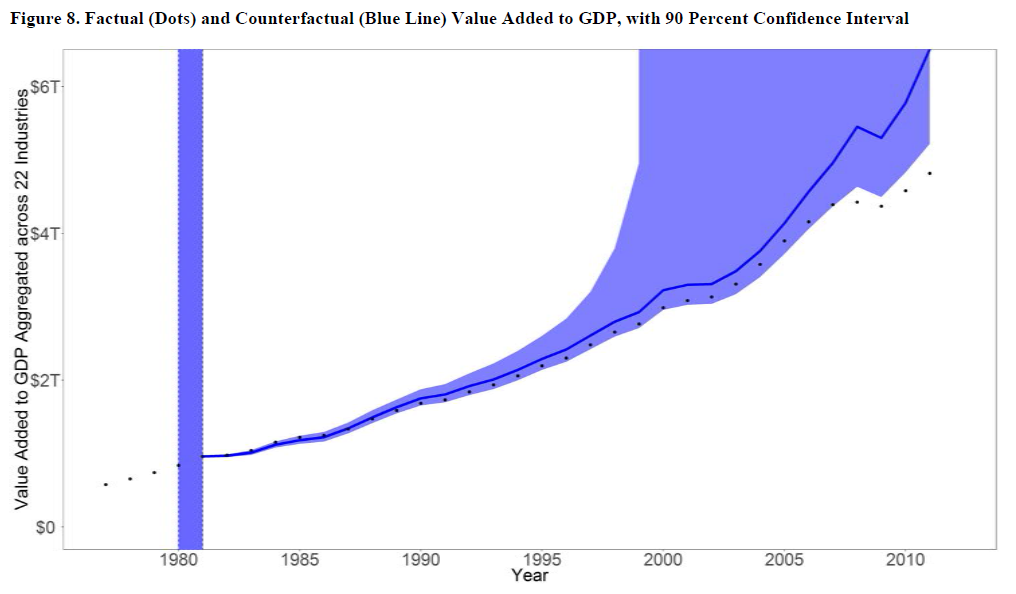 In any case, it is interesting that this is the source for essentially the only numerical prediction in the paper. The only other one is a regarding regulation in a cross country empirical framework (Djankov et al., 2006). Interestingly, they do not cite the fourth item that pops up when typing in the words “regulation economic growth” in google scholar: Jalilian et al. (2007). That paper concludes:

The results from both sets of modeling suggest a strong causal link between regulatory quality and economic growth and confirm that the standard of regulation matters for economic performance. The results are consistent with those of Olson et al. (1998) who found that productivity growth is strongly correlated with the quality of governance, and Kauffman et al. (2005) who found that the quality of governance has a positive effect on incomes.

In any case, if I were to make a bold conclusion like “Excessive regulation is a tax on the economy, costing the U.S. an average of 0.8 percent of GDP growth per year since 1980”, I’d want just a tiny, tiny bit more empirical backing.