The 2008 financial crisis and the sovereign crisis that followed in Europe have revived the old debates about the European Monetary Union (EMU). The key question underlying most issues is to know if member states have benefited enough from sharing the same currency and if their differences have begun to be ironed out.

In a recent working paper (Coudert et al., 2019), we revisit this issue by taking stock of the consensus reached after the 2008 turmoil that highlighted the accumulation of macroeconomic imbalances in the run-up to most financial crises. Specifically, we examine between-country disparities in terms of equilibrium exchange rates, i.e., exchange rates that would prevent currency misalignments resulting from unsustainable macroeconomic disequilibria within the member countries. There is common sense among economists and policymakers that currency misalignments—i.e., departures of real exchange rates from their equilibrium levels—are likely to cause substantial losses in economic efficiency and social welfare. As a consequence, minimizing currency misalignments may be a reasonable goal for governments, along with domestic objectives regarding inflation and the output. If the equilibrium exchange rate matters for efficiency and social welfare, it also plays a key role in allowing any economy to reach simultaneously both its internal and external balances. In the context of a monetary union, currency misalignments are especially detrimental because the nominal parity can no longer be adjusted. The only possible adjustment concerns prices. This is particularly painful when one member country has an overvalued real exchange rate, as it has no choice but to reduce its relative prices by cutting spending and limiting wages.

First, we look back on the debates that took place before the introduction of the euro, by considering a panel made of ten founding members of the euro area in 1999 (Austria, Belgium, Finland, France, Germany, Ireland, Italy, the Netherlands, Portugal and Spain) plus Greece which joined the union in 2001. We rely on a cluster analysis (i) to identify relatively homogeneous groups of euro-members based on their respective equilibrium exchange rate path, and (ii) to examine whether the subsequent partition of the euro area has evolved over time, specifically since the launch of the single currency. This method indeed allows us partitioning the eurozone into relatively homogeneous groups of countries without imposing any reference group or leading country as in business cycle synchronization analyses. Moreover, it provides further information on the level of heterogeneity in the euro area, by evidencing interrelationships within and between the different groups of economies. Using this methodology, we find evidence of two clusters of countries before the launch of the euro (see Figure 1). A first cluster can be identified as the “core countries”, it includes Germany, Belgium, the Netherlands, France and Ireland. A second group of homogeneous countries is made of Austria, Spain, Italy and Finland. Portugal and Greece can be considered as two outliers as they are found to be the countries exhibiting very different equilibrium exchange rate paths; Greece being the most idiosyncratic country, because of its structural weaknesses regarding the financing of its economy.

These results confirm that dissimilarities across the euro area candidates were still present at the eve of the EMU. The partition of the eurozone into different groups of relatively homogenous countries called into question the effectiveness of the Maastricht criteria in making these economies converge before the launch of the euro, and even the desirability of a unique monetary policy. Our findings comfort the view of a political driving force for monetary union, despite the economic arguments of dissimilarities between the core and the periphery. 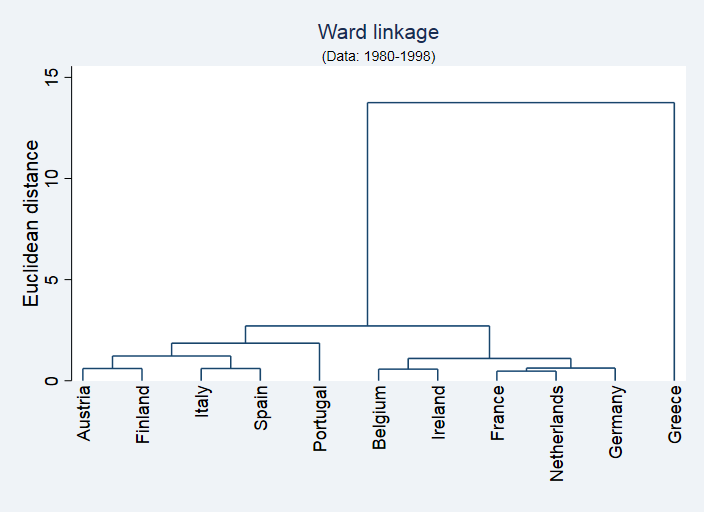 Figure 1. Cluster analysis results, 1980-1998 (dendrogram). Note: The vertical axis of the dendrogram represents the distance or dissimilarity between the countries’ equilibrium exchange rate paths, while the horizontal axis displays the different countries. The dissimilarity measures are captured by the heights of the links.

Second, we extend the analysis to the recent period in order to analyze the evolution of cluster memberships after the launch of the single currency. The results show that the configuration of the eurozone shares the same features as before (see Figure 2 as an example, similar results being obtained for various sub-samples). Indeed, there is still a set of core countries and a second group of economies, and monetary union has not reduced dissimilarities between these two clusters of countries. The peripheral countries appear to be more disconnected in sub-groupings: Italy now exhibits slightly distinct features from the other members, as well as Portugal which is linked to the peripheral set in a single element group. Greece still appears as an outlier, neither linked to core nor to peripheral members. It has even become more distinct from the other countries over time as the distance to the other clusters has increased. 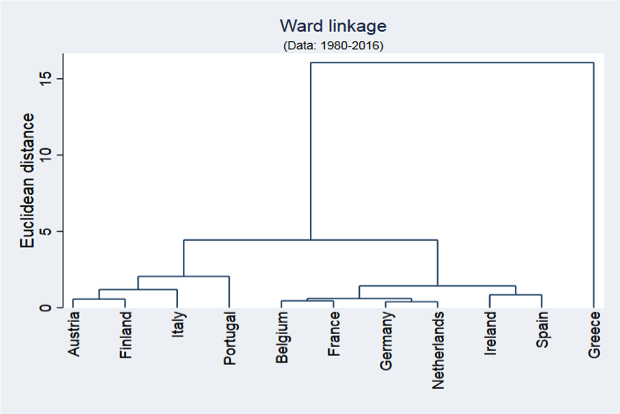 Figure 2. Cluster analysis results, 1980-2016 (dendrogram). Note: The vertical axis of the dendrogram represents the distance or dissimilarity between the countries’ equilibrium exchange rate paths, while the horizontal axis displays the different countries. The dissimilarity measures are captured by the heights of the links.

Overall, our findings suggest that the configuration of the eurozone has become more fragmented since the launch of the single currency as dissimilarities across and within groups of countries have augmented. This result refutes the argument that divergences across the potential EMU member countries were due to insufficient financial integration and would be swept off by monetary union. The adjustment that followed the financial crisis has not changed the deal between countries; the clusters have not been brought closer despite all the steps that have been taken to counter imbalances.

The success of the euro during its first decade of existence may have created the appearance of a convergence process driven by abundant capital flows that fueled consumption and real estate demand in the peripheral countries without however increasing their production capacities. Since the 2008 crisis that undermined this debt-driven growth process, many steps have been taken in order to correct macroeconomic imbalances, and notably the macroeconomic imbalance procedure (MIP) that the European Commission introduced in 2011. However, too little has been done in other areas such as structural or even fiscal policies. It is now time to recognize that the conditions for an optimum currency area will not arise spontaneously by the mere effect of the single currency. Large reforms of the euro governance are still needed to ensure the optimality of the single currency. Besides, real convergence should be also dealt with, because it was not fostered automatically by monetary union as expected. It is necessary to revive the catching-up process in the Southern members, for example by channeling more EU funds to the development of specific industries, in order to maintain social cohesion inside the area.