Today, we present a guest post written by Jeffrey Frankel, Harpel Professor at Harvard’s Kennedy School of Government, and formerly a member of the White House Council of Economic Advisers. A shorter version appeared in Project Syndicate on May 23rd.

Donald Trump on May 5 suddenly revealed that a trade agreement with China was not imminent after all.  To the contrary, the Administration on May 10 raised its earlier 10 percent tariff on $200 billion of Chinese goods to 25%, and threatened to extend 25% tariffs to the remainder of imports from China by late June (roughly $300 billion of goods).  China, of course, retaliated against US exports [announcing reciprocal 25% tariffs on $60 billion of US goods, to start June 1.  Surprised stock markets fell in response, with the S&P 500 down 4 per cent over the first week of the renewed trade war.

The mystery is why market investors or anyone else had up until May put faith in White House statements that a deal with China was expected any day.  Why believe this Administration on such a thing? Trump, after all, is the guy who, after meeting with Kim Jong Un in Singapore, claimed that North Korea was no longer a problem because it had agreed to denuclearization. And the guy who said that Saudi officials had promised him to buy $110 billion of US arms and to lower oil prices. Did anyone really expect a proud China to agree, without meaningful reciprocal concessions, to let the US write some of its laws and to pass subsequent unilateral judgment on whether it was complying?

US trade policy is now a mass of conflicting goals.

It is worth further unpacking some of the Trump trade illogicalities.

Does one need to understand “incidence” of a tax?

The right answer to the question of costs is that the US (and the global economy too) will be worse off if we are stuck indefinitely with these higher tariffs – as now appears possible.

The President’s gleeful belief that his tariffs get China to help fund the US government is outlandish.  A tariff is a tax, and US consumers and firms are the ones paying it, not China.  [The estimated reduction in U.S. real income is $1.4 billion per month.]

It is true that, in theory, Chinese exporters might have experienced a sufficiently large loss in demand as a result of all these tariffs that they would have been forced to lower their prices. Students in Econ-101 learn about the “incidence” of a tax, i.e., who ultimately pays the cost.  But two new studies by eminent economists examine the 2018 data and find that (1) the Chinese have not in fact lowered their prices and, as a result, (2) the full  cost of the price increase has been passed through to American households.  So one doesn’t even need Econ-101:  simple common sense gives the right answer in this case. 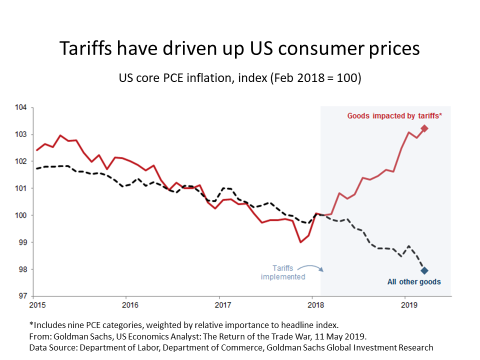 If Trump goes ahead with his threat to extend the tariff to all imports from China, the cost for a typical American household will be $300-$800 billion a year in one estimate, or as much as $2,200 in another estimate.  The cost to consumers doesn’t count the cost of lost exports on the part of US firms, workers and farmers.  The exports are lost through Chinese retaliation as well as other channels (including appreciation of the dollar against the renminbi).

In at least one respect, Trump’s trade policies are actually hurting the US budget.  China has retaliated particularly against soybeans and other American farm products. The Trump Administration, sensitive to the electoral importance of the farm states, is attempting to compensate farmers with billions of dollars in federal subsidies, much of it going to large wealthy farmers.  It’s yet another assault on the American taxpayer.

Does one need to understand comparative advantage?

Economists have long noted, whether ruefully or pridefully, that the public can’t be expected to understand the principle of the gains from trade without having been taught David Ricardo’s principle of Comparative Advantage.  Paul Samuelson famously identified the principle as both universally true and yet not obvious.

But one does not in fact need to assimilate the principle of Comparative Advantage to understand the basic idea of mutual gains from trade. If both the buyer and the seller voluntarily agree to the exchange, then both gain.  This assumes that they are each good judges of what they want – better, at least, than is the government.  This assumption is usually correct, with a few exceptions (such as purchases of opium).

The theory of Comparative Advantage makes useful predictions as to which country will choose to export which good; but it is not really essential for understanding the basic presumption that both sides gain from voluntary trade.  Again, common sense gives the right answer.

To say that both countries gain from trade overall is not to claim that every resident of each country gains. Of course an increase in trade gives rise to both “winners and losers” within each country.  So does any major change.  Tariffs create both winners and losers as well.  But the winners tend to outnumber the losers when trade is liberalized, whereas the losers tend to outnumber the winners when tariffs are raised.

Donald Trump appears to have engineered a spectacular example of this generalization: his trade war has hurt almost every segment of the American economy, with very few winners.  The losers include not just consumers, but also firms and the workers they employ, whether they are farmers who are losing their export markets or manufacturers who are forced to pay higher input costs.  Even the US auto industry, which did not ask for this “protection,”  is worse off over all, having to pay more for steel and auto parts.

Trump has come close to accomplishing something that one might have thought impossible: tariffs that benefit almost noone.  We may have to re-think the theory of political economy that says protectionism is usually the outcome of special interests that wield disproportionate power.  It is not enough to go back 30 years to the Japan-bashers of the 1980s.We may have to go back 300 years to the mercantilists who preceded Adam Smith (1776) and the Enlightenment.  The mercantilists disliked trade because it favored free individuals over the power of the state.