This paper analyzes the potential spillovers of acute financial stress in China, accompanied by a sharp slowdown in Chinese growth, to the rest of the world. We use three methodologies: a structural VAR, an event study, and a DSGE model. We find that severe financial stress in China would have consequential spillovers to the United States and the global economy through both real trade links and financial channels. Other EMEs, particularly commodity exporters, would be hit the hardest. The U.S. economy would be affected to a lesser degree than both EMEs and other advanced economies, and the primary channel of transmission to the U.S. could well be adverse financial spillovers through increased global risk aversion and negative equity market spillovers.

First, the VAR estimates suggests that the China adverse scenarios would have sizable effects on global variables in the expected direction. In particular, the dollar would appreciate, U.S. long-term yields would fall, global Emerging Market Bond Index (EMBI) spreads would rise, and world trade would fall (consistent with significant increases in EME risk premiums and safe haven flows to the United States, as well as China’s importance in global trade flows). In addition, there would be a substantial fall in global oil and metals prices (consistent with China being a major source of global demand for commodities).

Second, the VAR estimates also suggest that the hit to economic activity in different countries and regions would generally be significant (consistent with China’s strong trade links with other economies). More specifically, the output hit to EME commodity exporters would be about ¾ as large as the hit to China itself; to other EMEs would be about half; to advanced economies excluding the United States slightly more than a third; and only a relatively modest hit to the United States. The smaller U.S. effect reflects the U.S. economy being more closed, limited direct U.S. financial linkages to China, and greater capacity at the moment (than other advanced economies, say) to ease monetary policy to cushion the blow.

SVAR estimates conditional on a Chinese 4% deviation from baseline (blue) 8.5% deviation (red) suggest a noticeable hit to US output.

Below is Goldman Sachs’ forecast for 2020Q1: 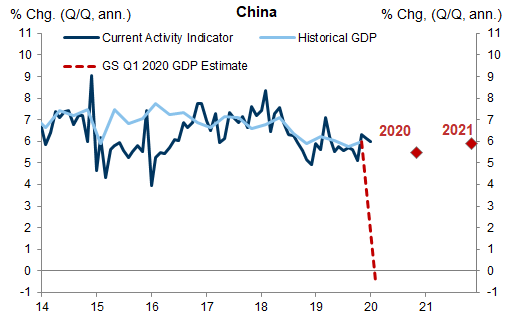 4 thoughts on ““Global Spillovers of a China Hard Landing””