Today we are fortunate to present a guest contribution written by By Laurent Ferrara (SKEMA Business School, Paris, and Director of International Institute of Forecasters), Luca Metelli (Banca d’Italia), Filippo Natoli (Banca d’Italia) and Daniele Siena (Banque de France). The views presented represent those of the authors, and not necessarily those of the institutions the authors are affilliated with.

Few months after its arrival, at the end of 2017, the Trump administration launched a large fiscal stimulus composed of both tax cuts and government expenditures of roughly 1.4% of GDP (Tax Cuts and Jobs Act and Bipartisan Budget Act – although the exact impact on output is difficult to assess, there is a consensus on some positive effects on GDP growth of this pro-cyclical fiscal boost).

At the same time, the Trump administration decided to fight external imbalances (i.e. reduce US trade deficit) by increasing tariffs and by starting a trade war with China (the escalation in trade tensions was only recently put on hold by the signature of the “Phase 1 trade deal” with China in January 2020).

Yet, it turns out that getting additional growth through government expenditures and reducing trade deficit through stronger protection are contradictory policies. In fact, in a recent working paper (Ferrara, Metelli, Natoli, Siena, 2020) focusing on the effects of government spending on the US economy, we show that an increase in government spending induces a trade deficit. Therefore, while the tariff war aimed at decreasing the trade deficit, the fiscal package was pushing down net exports.

More generally, our work joins an open debate in the academic literature on the impact of fiscal shocks on macroeconomic variables, like the exchange rate, inflation rate, consumption and net exports. There are two reasons why this debate has generated so much academic work. First, it is difficult to identify exogenous movements in government spending to assess their causal effect and, second, theoretical intuitions are not aligned with the empirical evidence, generating economic puzzles. According to standard theoretical frameworks, whether Real Business Cycle or old and new-Keynesian theories, consumption and the trade balance should fall, inflation increase and the real exchange rate appreciate in response to an increase in government spending. This is because, in theory, an increase in government spending works as an aggregate demand shock. On the one hand, higher demand pushes domestic prices up, increasing inflation and appreciating the real exchange rate. On the other hand the fall in consumption is explained by an expected increase in future taxes, which decreases household wealth who is incentivized to save more. The reduction in consumption, the appreciation of the exchange rate and the home bias in government spending make the trade balance fall.

However, when dealing with data, the empirical literature finds mixed results. For example, on inflation, while Caldara and Kamps (2017) find that a government spending shock is inflationary, Fatás and Mihov (2001b) show that the same shock decreases prices/inflation. On the real exchange rate, while Kim and Roubini (2008) find that fiscal expansions depreciate the real exchange rate, Auerbach and Gorodnichenko (2016) show that unanticipated shocks to announced military spending appreciate the U.S. dollar (for interested readers, an extensive review of the literature is available in our working paper).

In Ferrara, Metelli, Natoli and Siena (2020), we re-examine the question on the effects of fiscal spending shocks, merging the closed and open economy debate. The main novelty with respect to the existing literature is that we employ a different identification scheme. The military narrative series constructed by Ramey (2011) (and updated in Ramey (2016), see Figure below) is used into a Vector Auto-Regression model, employing the proxy-SVAR methodology developed by Mertens and Ravn (2013) and Stock and Watson (2008). 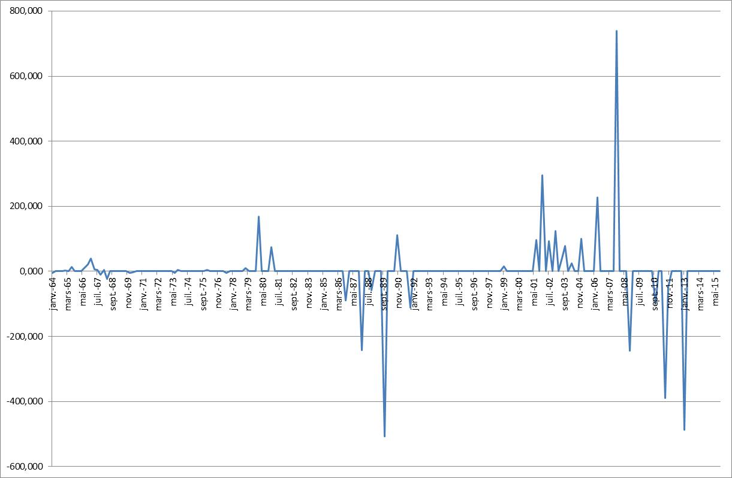 By employing this identification technique, most puzzling results dissolve: government spending shocks are inflationary, appreciate the real exchange rate, worsen the trade balance and decrease private consumption (see the Impulse Response Functions in the figure below).

Few technical details are needed. The proxy-SVAR model is estimated on quarterly U.S. data using a Bayesian approach over the 1964Q1-2015Q4 period. Two important aspects should be emphasized at the very outset. First, even though Ramey (2016) has constructed the narrative series to instrument both contemporaneous and anticipated government spending, we use it here to instrument only unanticipated shocks. We show that this series is indeed a valid and good instrument for contemporaneous government spending in the 1964-2015 period, satisfying both the relevance and the exclusion restrictions. Second, given the importance of the time-frame for fiscal estimates, we pick as a baseline the longest possible sample, 1964Q1-2015Q4, allowing the use of the official real effective exchange rate data from the Bank of International Settlement (BIS). However, multiple robustness checks of these two aspects are also performed. 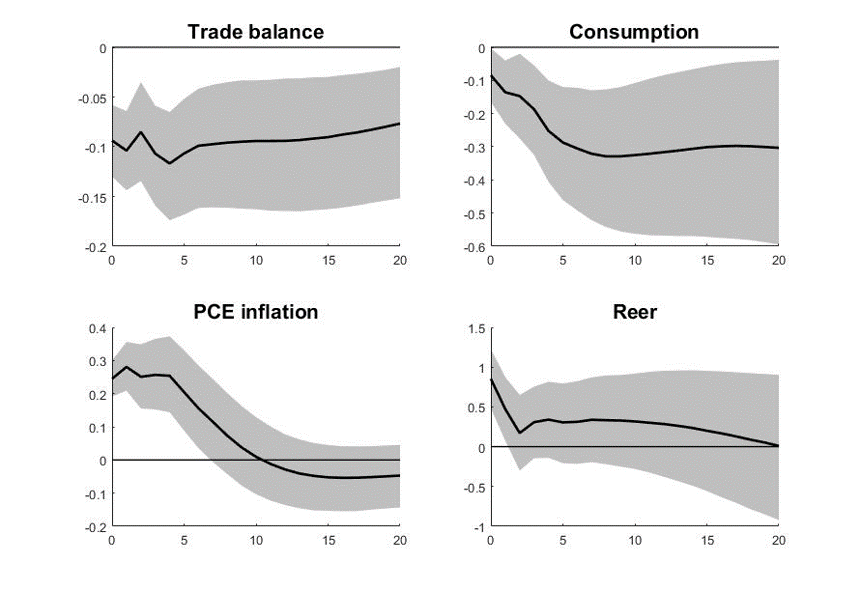 In fact, our findings restore the link between theoretical and empirical results. We show this previous point by setting up a standard two-good RBC small open economy model and estimating it to match the empirical impulse-responses to a government spending shock. Empirical dynamics are aligned with standard theoretical predictions and the responses of an estimated real business cycle small open economy model match extremely well empirical impulse-responses (see Figure below).

We conclude by saying that we can see our results as a reconciliation of empirical estimates with standard theories or, more simply, as a spur to further research on the joint response of domestic and international prices to fiscal shocks.