Today, we present a guest post written by Jeffrey Frankel, Harpel Professor at Harvard’s Kennedy School of Government, and formerly a member of the White House Council of Economic Advisers. He was a member of the NBER’s Business Cycle Dating Committee for 25 years, with his term ending last fall.  A shorter version appeared in Project Syndicate and in The Guardian.

This post follows up on “What Determines When a Recession is Recession?” which pointed out some drawbacks of defining a recession by two negative quarters of growth.

In some countries there is another, more fundamental, basis for questioning the two-quarter rule for determining recession, or any GDP-based rule. Some countries experience sharp slowdowns or periods of diminished economic activity and yet their long-term trend growth rates are either so high or so low that the negative-growth rule does not capture what is needed to describe the cyclical state of the economy.  For such countries, the problem is that perhaps there is nothing special about the number zero.

Consider first a country where the rule would yield excessively frequent “recessions.” In Japan, the population is shrinking and productivity growth is far below what it used to be, so the country’s output growth has averaged only 1% per year in recent decades. As a result, even small fluctuations can turn GDP growth negative. The two-quarter rule would suggest that Japan had seven recessions between 1993 and 2015, or one every three to four years.

Now consider the opposite problem, when the two-quarter rule yields infrequent recessions. Australia is said to have had the world-record for the length of its recent expansion, at 28 years.  To be sure, Australia has earned much of its success. Still, one reason why Australia’s GDP showed no downturns in the past 28 years is that the country’s labor force grew  substantially faster than those in other advanced economies, especially in Europe and East Asia.

Similarly, China has not had an outright recession in 26 years (since 1993). The reason, of course, is that its trend growth rate has been high, owing to rapid growth in labor productivity.  Chinese growth slowed sharply in the Great Recession of 2008-09, but did not turn negative.  GDP did fall sharply when the coronavirus hit in the first quarter, but if the level of GDP rises even a little off the floor in the current quarter, China will not meet the technical definition of a recession even now.

This problem arises when seeking a definition of a global recession.  If negative GDP growth is the criterion, then global recessions are very rare, as a result of high trend growth among the average of EM and developing countries.  (To be sure, the 2008 and 2020 recessions qualify even under this strict criterion.)   For this reason, the IMF and other observers tend to adopt other less strict rules-of-thumb for calling a global recession, such as global GDP growth below 2 ½ % or negative growth in GDP per capita. 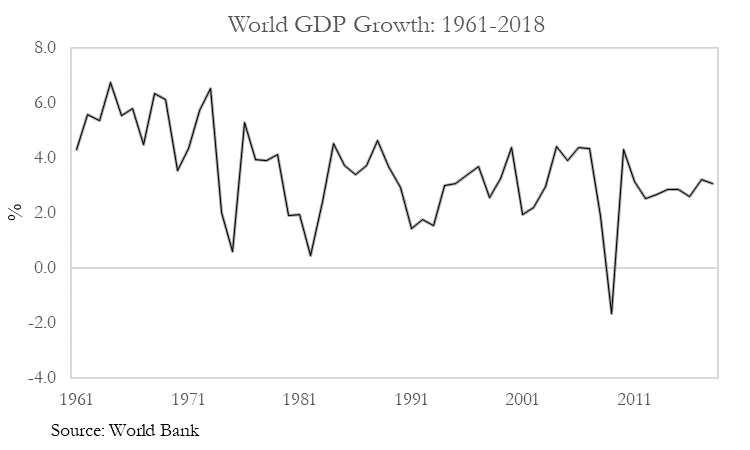 12 thoughts on “Guest Contribution: “Defining recessions when negative growth is too common or too rare””