Today we are fortunate to have a guest contribution by Sam Williamson, Emeritus Professor of Economics at Miami University, and President of Measuring Worth.

When the estimates of Gross Domestic Product (GDP) for the third quarter come out on October 29, they are likely to show a significant growth in the economy compared to the second quarter. If so, we can expect statements by President Trump and his supporters about how great the economy has performed during his term and another tweet claiming that electing Vice President Biden “Will kill your Stocks, 401k’s, and the ECONOMY. BIG CRASH!” As an alternative you have a forecast from Goldman Sachs that says “A blue wave this November led by Democratic presidential nominee Joe Biden would lead to a surge in economic growth.”

How do you decide? An objective way to evaluate these claims would be to compare the performance of various economic indicators during this administration with the performance of previous administrations. I present here two measures for this comparison; the growth in real GDP, and the growth in the stock market as measured by the Dow Jones Industrial Average (DJIA). The time series data of these measures and others discussion are available in an essay on MeasuringWorth.com.

By the way, it is not a measure of the success of an administration to say “we have the greatest economy ever.” In the last 120 years, the economy has grown under every president except Herbert Hoover. To say the economy is the greatest now is the same as saying an 18 year old is bigger than when he was 14. (It is possible Trump may join Hoover with negative growth of GDP in the four years he is in office.)

Since World War II there have been six Democrats and six Republicans elected to be President and when ranked by the increase in real GDP for the first three years, five of the first six are Democrats. The chart below shows the ranking. 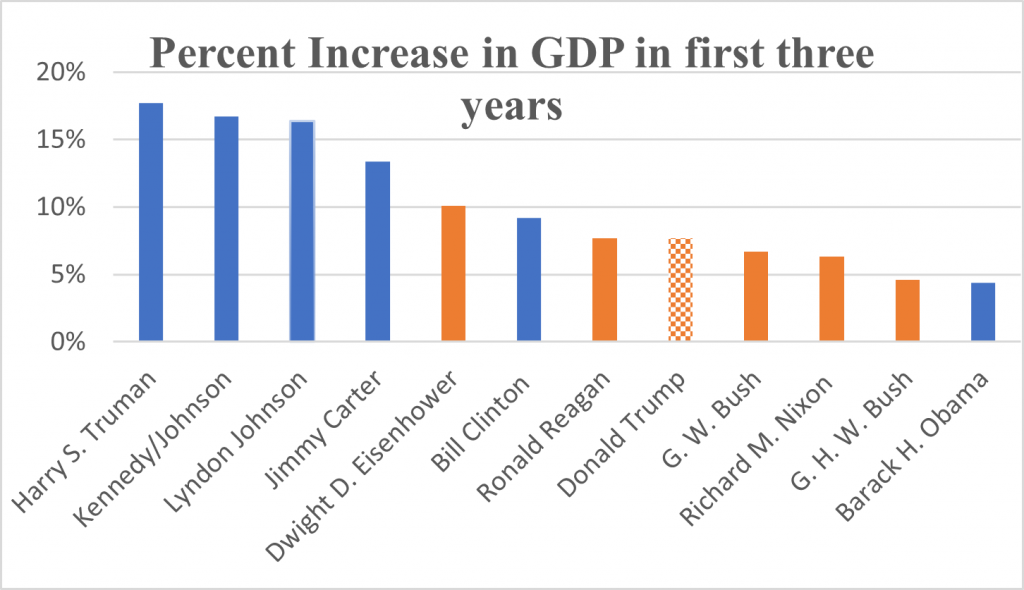 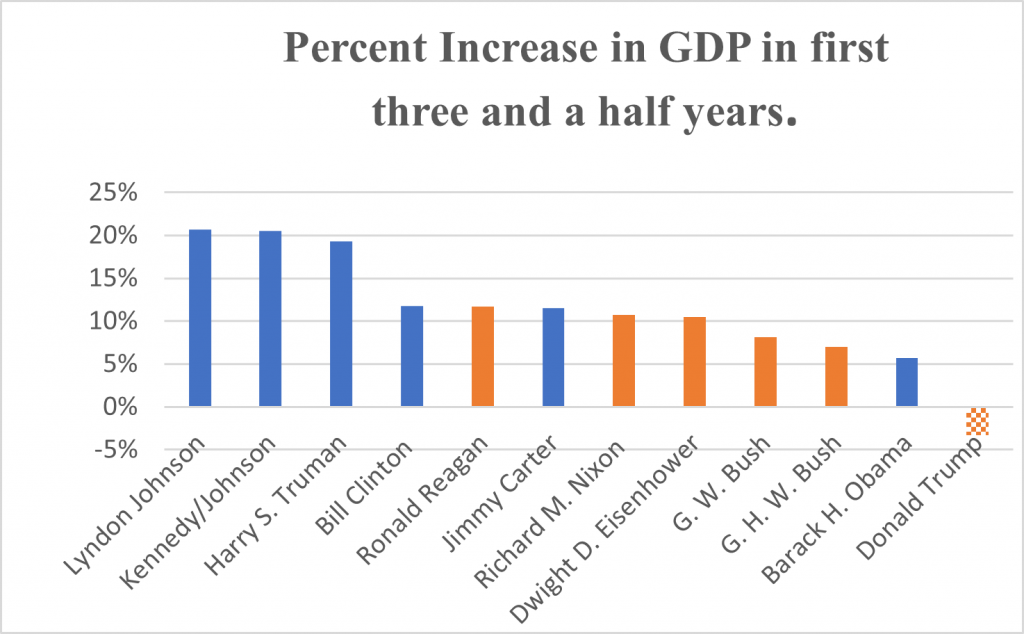 The effect of the pandemic can be seen when you rank these twelve by their first three and a half years and find that Trump is last with a decrease of 3.3%, 9.0 percentage points behind Obama who’s first year had negative growth because of the Great Recession. The economy has grown faster during Democratic administrations.

During his 2020 State of the Union Address, President Trump claimed that 401ks and pensions are doing far better than they have ever done before. If he means that the market is higher than it was three years ago, of course he is right. Under every administration for the last 120 years the stock market has gone up some time during their time in office. Even during Hoover’s term the market was 46% higher in September of 1929 than the day he was elected. Investors were pleased with their new president. Of course it did not last and on the day he left office, the DJIA stood at 20% of its value four years earlier on his election day.

Doing well in the stock market is measured by the percentage growth in value. So the question is, which administration had the fastest growth in the stock market (and therefore your 401k?) There are several ways to compare market performance, however, picking one day over another is arbitrary. For Trump, the highest and lowest market values of his term were 28 market days apart. On February 12, 2020, the DJIA was 61% more than it had been on the day he was elected. A few weeks later, on March 23, the average had fallen close to the level on the day of his election and stood at a 0.3% gain.

To provide some basis of comparison, we have chosen to compare the highest value of the DJIA during each President’s term with the value on the day he was elected, and the day he was inaugurated. When elected the market may react in anticipation. Two and a half months later, the new president is now in charge. We do not consider when in the term it takes place with some peaks coming early in term and others on the last day. We are just seeing that at some point in his term the market had peaked and how much was that.

This table compares those highs.

Ranking the Greatest Gain in the Stock Market by Presidents terms since 1900. 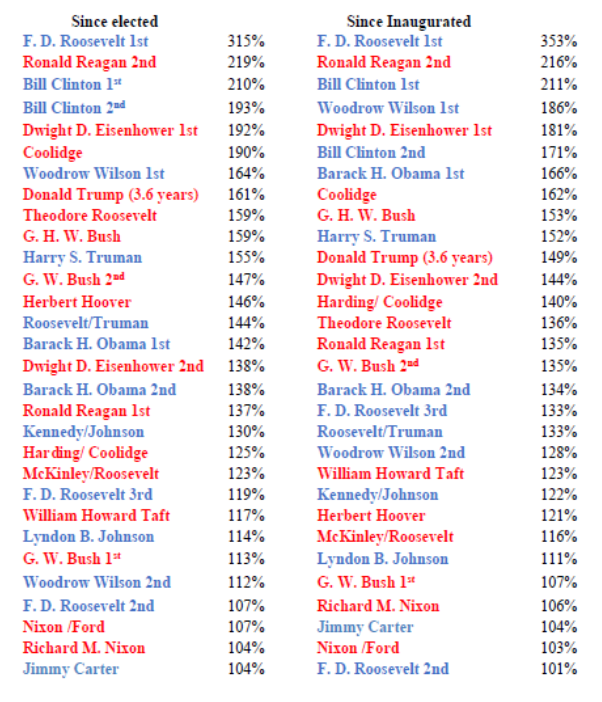 For Trump, these values were 161% and 149%, respectively. Though representing growth, these figures are nowhere near “all-time” records ranking eighth and eleventh, respectively. Four and six Democrats were ahead of him on the two lists including Clinton and Obama.
Does the political party make a difference? Three of the top four on both lists are Democrats, however, after that it is a toss-up. What is clear is that the stock market has been a bullish and bearish during the terms of both parties.

45 thoughts on “Guest Contribution: “The Relative Economic Performance of the Trump Administration””