The COVID-19 pandemic triggered the sharpest downturn in the world economy since the Great Depression.  A plethora of research has emerged to study the channels through which the pandemic has affected economic activity, using a wide range of different methodologies: production-based or computable general equilibrium (CGE) models, epidemiological models, event studies, and broader panel data analyses. But only a few of these papers (Deb et al. 2020, IMF 2020, Maloney and Taskin 2020, Furceri et al. 2021) draw on the full range of economic experiences around the world. And aside from Furceri et al. (2021), these focus mainly on daily proxies for economic activity — e.g., atmospheric emissions and cellphone-based mobility data — rather than actual production measures.

My recent research with John Kearns makes a novel contribution by analyzing the impact of pandemic variables on an actual measure of economic activity — industrial production (IP) — across a wide range of economies.  We apply our analysis to a number of critical questions: Did COVID-19 depress output mainly through lockdowns or voluntary social distancing? How did these effects differ among different economies? How large a role was played by the collapse in global trade?

We estimated panel data regressions of the monthly growth in IP on several measures of the pandemic for 58 countries between March and December 2020. The domestic pandemic measures include deaths per 1,000 of the population and a measure of the stringency of lockdown restrictions, the Oxford Stringency Index (OSI). All else equal, a rise in pandemic deaths would be expected to lower IP, both by inducing supply shortages and by prompting an increase in social distancing that leads production to be scaled back. Similarly, an increase in lockdown restrictions would also be expected to lower IP.  (To address the endogeneity of pandemic deaths and lockdown restrictions with respect to shocks to economic activity, we used a two-stage least squares procedure described in our paper.)  Finally, even countries that were not hard-hit by the virus itself might have suffered its economic fallout through the collapse in world trade; to measure this effect, we include merchandise exports in our model.

We estimated this model separately for the richest, poorest, and middle thirds of the countries in our sample (see our paper for country lists), and we found important differences in how the pandemic affected economic activity in these groups.  In the charts below, we use the estimated models to decompose the trajectory of industrial production over the course of 2020 into the contributions of the explanatory variables.

In all three country groups, but especially the poorest countries, we find that the key factor in the collapse of production last March and April was the imposition of lockdown restrictions (the purple bars). In contrast, COVID-19 deaths (the orange bars), which are often interpreted as a proxy for social distancing, accounted for only 19 percent  of last spring’s plunge in IP in the richest countries, and had no measurable impact at all in the poorer countries in our sample. This latter result seems plausible, as poor households are less likely to reduce their work unless lockdowns are imposed by the government.

Figure 1: Impact of COVID-19 on the 20 richest countries (median) 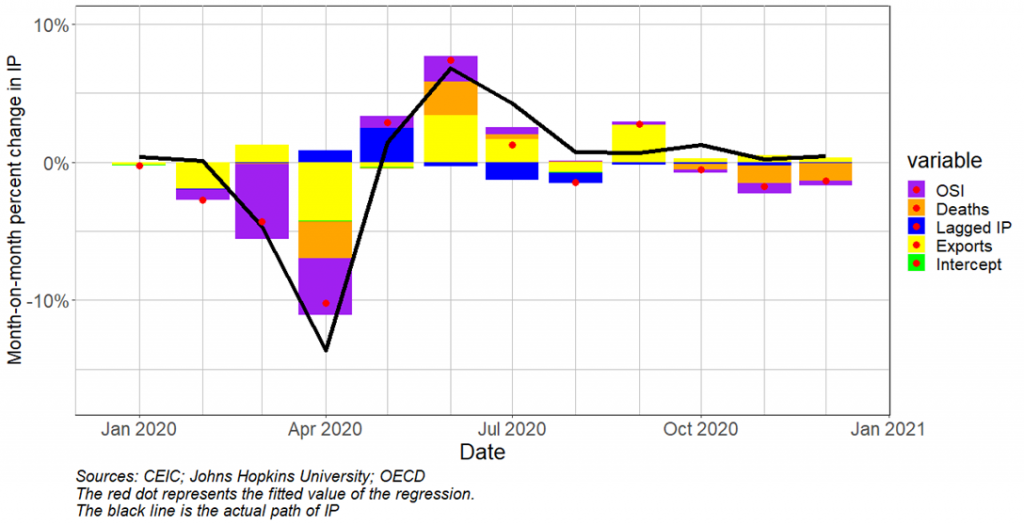 Figure 2: Impact of COVID-19 on the 18 middle-income countries (median) 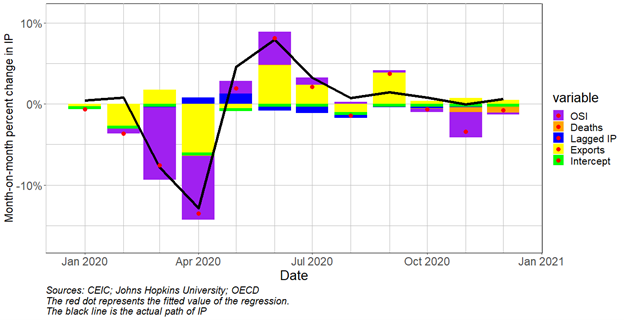 Figure 3: Impact of COVID-19 on the 20 poorest countries (median) 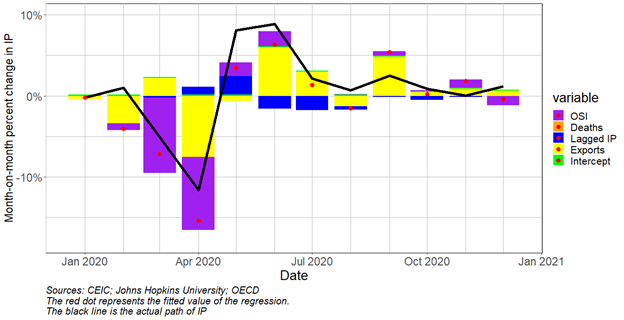 Perhaps the most distinctive finding of our study is the outsized role played by international trade in the pandemic recession — it (the yellow bars) accounted for about a quarter of last spring’s decline in IP in the poorest countries. To be sure, the contraction in global trade was itself the outcome of pandemic effects on the economy’s trade partners — it thus represents the indirect effect, rather than the direct domestic effect, of the pandemic on the economy in question. But this does not diminish the importance of trade as a global conduit for the COVID-19 recession.

Going forward, international trade should provide some offset to the adverse effects of vaccine inequality around the world.  Although initial progress in vaccinations will be largely concentrated among the advanced economies, their recovery of income and imports will provide material support to the world’s poorest economies. That said, even in the advanced economies, economic activity will not fully — and sustainably — return to normal until most of the world has the virus under control. Accordingly, aid to the world’s poorest economies, in the form of both vaccine donations and financial support, will be imperative for economic as well as ethical reasons.

47 thoughts on “Guest Contribution: “The Impact of COVID-19 on Global Industrial Production””