Today, we are pleased to present a guest post written by David Papell and Ruxandra Prodan, Professor and Instructional Associate Professor of Economics at the University of Houston.

As the June 2021 Federal Open Market Committee (FOMC or Committee) meeting approaches, the uncertain recovery of the economy from the effects of the Covid-19 pandemic has led to increased speculation regarding when the FOMC will raise the federal funds rate (FFR) from the current effective lower bound (ELB).  In a new paper, Policy Rules and Forward Guidance Following the Covid-19 Recession, we compare the FFR prescribed by various policy rules with (1) the actual path of the FFR following the Great Recession and (2) the projected path of the FFR with FOMC forward guidance followed by the policy rule in Clarida (2020).

At its September 2020 meeting, the Committee approved outcome-based forward guidance, saying that it expects to maintain the target range of the FFR at the ELB of 0 to ¼ percent “until labor market conditions have reached levels consistent with the Committee’s assessment of maximum employment and inflation has risen to 2 percent and is on track to moderately exceed 2 percent for some time.” In the Summary of Economic Projections (SEP) released following the March 2021 meeting, the median projection of the members for the FFR was 0.1 percent through the end of 2023.

Neither the original nor the shortfalls rules are consistent with the revised statement. We introduce two new rules in accord with the revised statement that we call the Taylor and balanced (consistent) approach rules. First, we replace the rate of unemployment in the longer run with the unemployment rate consistent with maximum employment and base FFR prescriptions on shortfalls instead of deviations. Second, if inflation rises above 2 percent, the rule is amended to allow it to equal the inflation rate “moderately” above 2 percent that the FOMC is willing to tolerate “for some time” before raising rates in order to bring inflation down to the 2 percent target.

Figure 1 depicts the FFR prescribed by the original, shortfalls, and consistent balanced approach rules following the Great Recession, as well as the actual FFR. A similar diagram for the three Taylor rules is in the paper. The consistent rule prescribes a liftoff from the effective lower bound (ELB) that is very close to the actual liftoff with deviations between the prescribed and actual FFR’s that are smaller than with the original and the shortfalls rules. At the end of 2019, the prescriptions from the shortfalls and consistent rules are very close to actual policy. 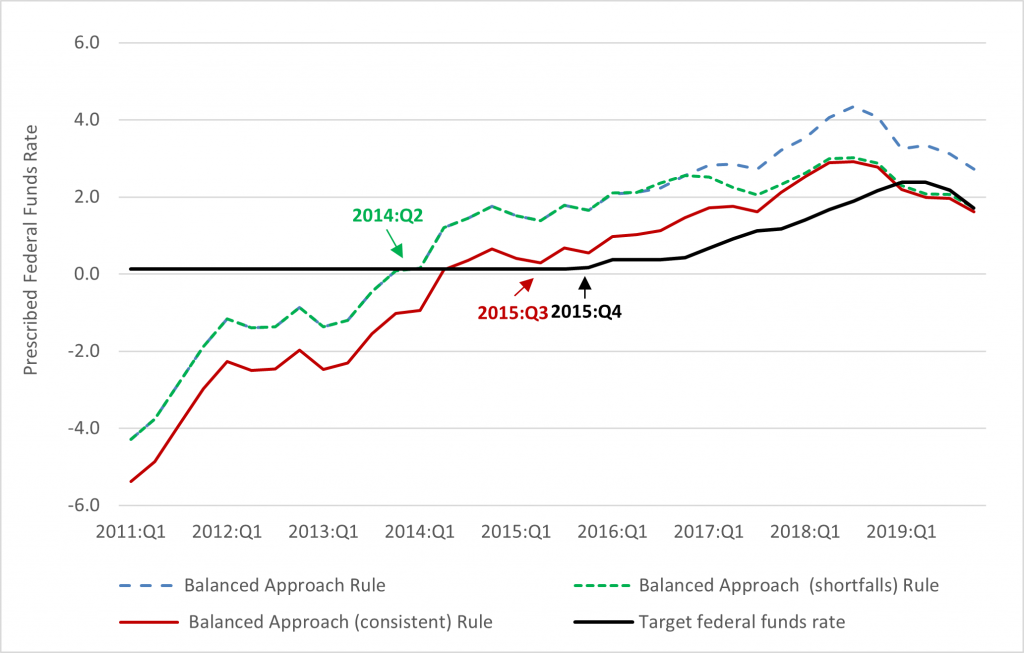 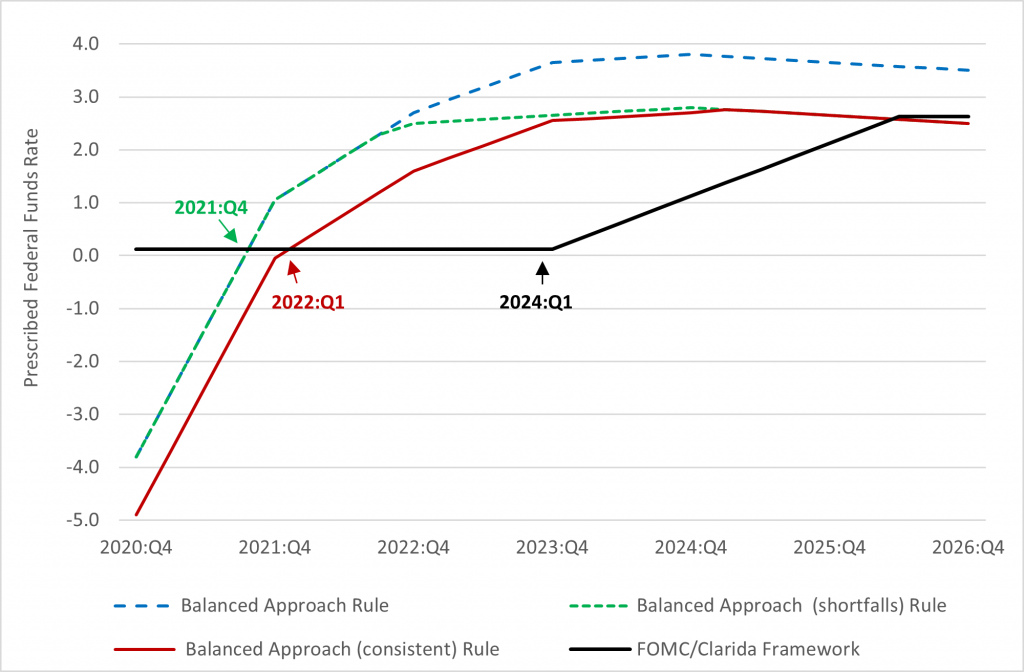 Policy rules are an important input for monetary policymaking. As described in the February 2021 Monetary Policy Report, “Policymakers consult policy rule prescriptions derived from a variety of policy rules as part of their monetary policy deliberations without mechanically following the prescriptions of any particular rule.” The prescriptions from the balanced approach (consistent) rule are in accord with the revised statement, very closely match the exit from the effective lower bound in December 2015, are almost identical to the federal funds rate at the end of 2019, prescribe a faster pace of normalization following the Covid-19 recession than the FOMC forward guidance, and converge to the FOMC/Clarida framework by 2026:Q2.