As of December 2020, foreign holdings of US Treasury debt (UST) reached over $7 trillion of which $4.1 trillion was held by foreign official institutions — mostly in the form of Treasury notes and bonds (Figure 1). The growth and concentration of USTs held abroad stimulated an active body of research aimed at understanding the potential impact of foreign demand for USTs on US long term interest rates (See for example, Warnock and Warnock, 2009, Beltran et al., 2013).

Figure 1: Foreign Official Ownership of US Treasury Notes and Bonds

However, most studies estimating the impact of foreign official demand for USTs on US yields assume that US yields evolve to reflect domestic conditions, such as Fed’s monetary policy stance, risk premia, and expectations over future domestic GDP growth and inflation, etc. But in an increasingly interconnected world, US yields are likely to reflect global economic conditions too. Moreover, foreign official demand for USTs is shaped by these same global economic conditions because the motives behind central bank accumulation of international reserves tend to be globally cyclical.

And most of this impact operates through affecting the term premium.

The underlying reasoning is intuitive: foreign official purchases and sales of USTs are cyclical. Foreign officials tend to accumulate USTs when others are selling safe assets (amid global expansions) and they tend to sell USTs when others are buying safe assets (amid contractions and crises). As a result, downward pressure exerted on US yields by foreign central bank buying of USTs tends to occur when yields are otherwise rising globally, and vice versa. Therefore, its crucial to condition on the level of global yields, reflecting global economic conditions, along with domestic factors.

To measure global factors that capture both current and expected fundamentals, I use short-term (3-month) and long-term (10-year) yields from 19 non-US advanced economy sovereign bonds. I then recover short-term and long-term global yield factors, respectively, by computing an GDP-weighted average world yield that excludes the US. Figure 2 shows that both the long-term and short-term global yield factors covary quite tightly with US yields. The secular decline in US 10-year yields over the past two decades is also observed in global yields.

Figure 5: Impulse Response of US Yields over the Federal Funds Rate to a Foreign Official UST Sale (1% of Debt) 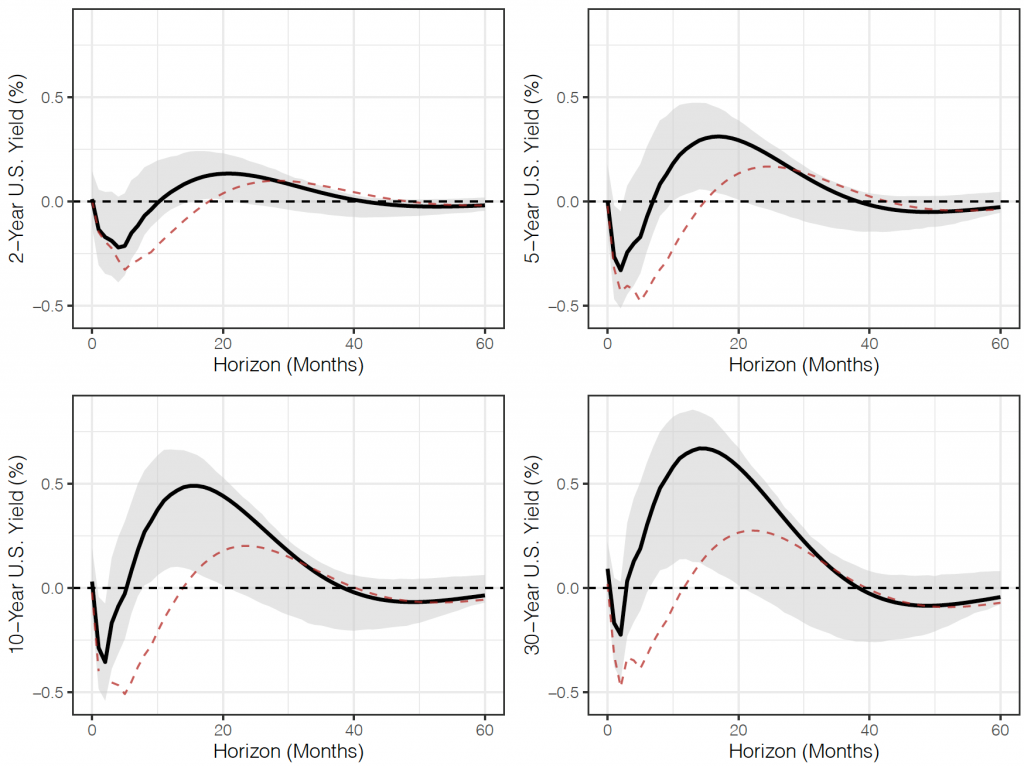 To explore the short-run impact of a sudden sale of USTs by foreign officials, I estimate a structural VAR of the US yield curve augmented with both global and domestic factors as conditioning variables. Figure 5 traces the impulse response of US yields across different maturities to a foreign official sale of USTs the size of 1% of marketable Treasury debt outstanding. Short-term yields are insensitive to foreign official UST demand, but longer-term yields respond significantly within several months following the UST sale. 10-year yields increase by 50 basis points, which can be translated to a 27.5 basis point impact per $100 billion foreign official purchase/sale.

For comparison, the dashed red line in Figure 5 represents the same impulse response from a VAR that does not condition on global factors and only conditions on domestic factors. The estimated impact is substantially smaller (13.2 basis points per $100 billion) when global factors are omitted. In addition, the counter-intuitive negative initial dip in yields following a UST sale is further exaggerated when excluding global factors. This points toward omitted variable bias which the global factors partially correct for, as US yields tend to fall during global economic downturns, precisely when foreign officials tend to sell USTs.

A key implication of these findings is that prevailing estimates of impact of foreign official UST demand on US interest rates may be substantially understated since they do not account for global confounding factors. As such, relying on previous estimates may underestimate the financial stability risks associated with large, unexpected, and acyclical foreign purchases or liquidations of US Treasuries of the black-swan type. In Ahmed (2021), these issues are explored further, presenting long-run and short-run estimates from various econometric specifications. I explicitly deal with the simultaneity between foreign UST flows and US yields and the presence of global common factors jointly, and I also find that US yields are particularly sensitive to foreign official demand linked to China’s exchange rate policies.

8 thoughts on “Guest Contribution: “Foreign official demand for US debt and US interest rates: Accounting for global common factors””