Back in July 2021, when How far to full employment? was posted on Econbrowser, nonfarm payroll employment, as of June 2021, was 4.4% below pre-pandemic peak level. Since that time the U.S. economy added nearly 1.8 million jobs (including revisions), however the employment shortfall relative to February 2020 level was still -3.3% as of September 2021. This was among others due to the Delta surge that slowed hiring especially in August and September. So, how far is the labor market behind full employment state as of the third quarter of 2021? Calculating the deviation of employment from trend, according to the approach proposed by Aaronson et al. (2016), revealed back in July that in the second quarter of 2021 the employment gap was -2.8% (-4.3 million jobs). The same exercise with currently available data vintages and the same July projections from CBO, leads to the outcome of -1.4% (-2.1 million jobs) in the third quarter of 2021, of which roughly -2.4 million results from the labor force participation rate decline below potential level and around -0.4 million from unemployment rate being above natural level (Figure 1). The remaining +0.7 million deviation results from the population and ratio contributions combined (Figure 1). At the same time second quarter gap was revised up to -3.7 million jobs. 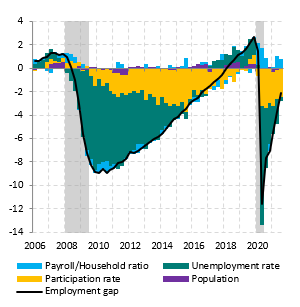 So, when can one expect this gap to close? If one assumes that the pace of job creation is 500k per month (in the third quarter the average pace was 550k jobs per month) the gap would already reach +906k jobs in the first quarter of 2022. Cut that pace in half and you get a +150k jobs gap in the second quarter of 2022. Let’s hope the first option is more likely.

33 thoughts on “Guest Contribution: “How far to full employment? – An update””