Over seven and a half years ago, Jim remarked about Bitcoin:

Hard to know where this is all going to lead. But one thing is clear– we have added a very interesting new chapter in the history of money. 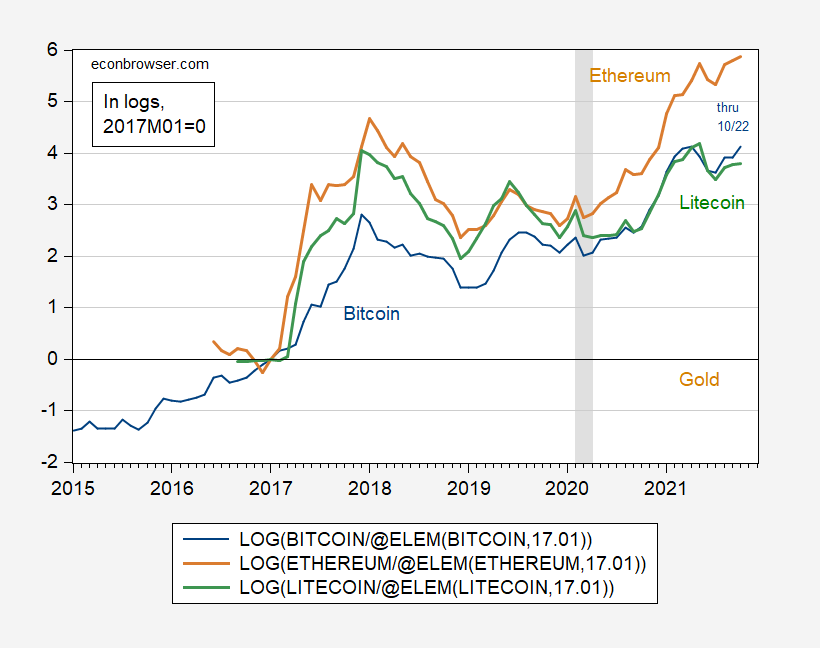 These three particular cryptocurrencies have experienced proportionately enormous appreciations. Taking bitcoin as an example, it’s clear cryptocurrency returns have been enormous compared to even the S&P 500. 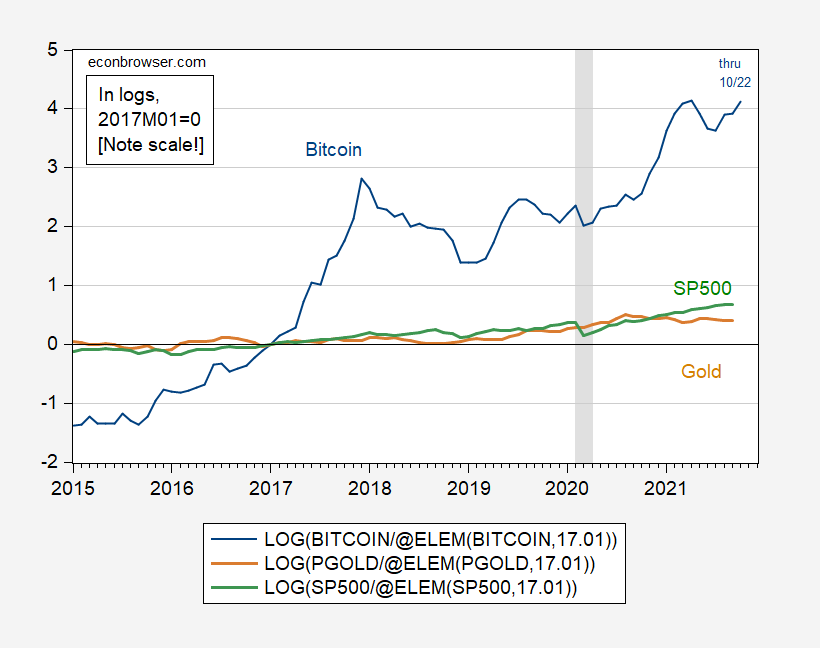 However, the month-on-month volatility of bitcoin is enormous, even dwarfing that of gold, as shown in Figure 3.

The standard deviation of month-on-month (not annualized) changes was 2.8% and 3.9% for gold and S&P 500 respectively. For bitcoin, it’s 21.6% monthly. That means that bitcoin does not fulfill the third function of money, namely a store of value, very well.

Given this volatility, one has to wonder why one would want to hold bitcoin. In his post, Jim asks:

Why does the stuff have value in the first place? The answer is that it would be very helpful to many buyers and sellers of real goods and services if they were able to pay for transactions in this way. We can think of any form of money as an asset that provides liquidity services, which refers to the tangible benefit to its holder coming from the ability of the asset to facilitate certain transactions. The value of money, that is, the value of real stuff you’d be willing to give up to hold money, can be thought of as the present value of the stream of these future liquidity services.

Bitcoin has two potential advantages over credit cards for providing such liquidity services. First, the supporting network only needs to verify that the private code is valid, which is less costly than verifying that you are indeed the rightful owner of a credit card and are ultimately going to deliver good funds. …

Second, Bitcoins are relatively more anonymous than credit cards. In this respect, they enjoy some of the same advantages as cash….

One can formalize this argument by referring to the equation for pricing assets:

D stands for dividends when P refers to a stock price. In our context, D is the liquidity services provided by bitcoin (which can be small for those who don’t need to evade restrictions), P the price of bitcoin. If one can rule out bubbles, then a bitcoin price is equal to the present discounted value of liquidity services. However, there’s no reason to impose this assumption.

Then the price of bitcoin is moved primarily by new information that changes the information set used for forecasting the future price — in other words, the speculative motive is central.

The expected future price is in this interpretation driven by new information about the liquidity services provided by bitcoin. New regulatory measures — either tightening or loosening — should be associated with bitcoin price movements. Figure 4 highlights the role of such regulatory events, as well as the discount rate.

Chinese measures to rein in the use of bitcoin negatively impacted prices. On the other hand increasing acceptance of the use of bitcoin — as in the establishment of a bitcoin futures ETF — enhanced the liquidity services provided by bitcoin.

For more, see Charles Engel’s paper on the subject. Eswar Prasad devotes considerable discussion of cryptocurrencies in his new, comprehensive assessment of the digital revolution in finance, The Future of Money.

11 thoughts on “The Price of Bitcoin”