In case you didn’t already know it, fatality rates are much higher for unvaccinated, and hospitalization rates are rising as rapidly as has been recorded (as far as I can eyeball).

The fact that unvaccinated are 17 times (unadjusted for demographics, etc., I think) more likely to be hospitalized than vaccinated suggests that there is going to be disproportionate impact – both geographically and along the rural/urban divide.

Given the transmissibility of the omicron variant and its (conjectured) lower degree of severity, I think a good indicator of the impact is hospitalizations. There the trajectory is quite disconcerting, even if it isn’t following closely cases.

CEA Chair Cecilia Rouse comments on omicron and the economy, at NPR.

The Economist has just posted a new article on the impact – mostly speculation of course. Airlines, restaurants, will likely be hit hard. 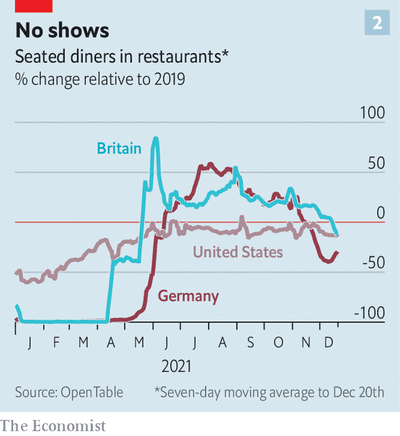