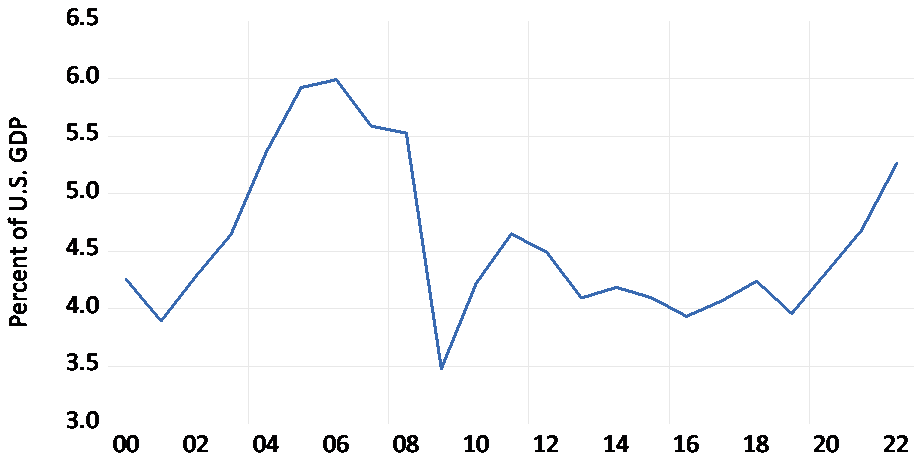 The G-5 countries (France, Germany, Japan, the UK, and the U.S.) were alarmed by these imbalances.  To resolve them they reached the Plaza Accord in September 1985.  The U.S. agreed to reduce its budget deficit, America’s trading partners implemented stimulative policies, the five countries worked together to reduce the value of the dollar, and all agreed to fight protectionism. The dollar did depreciate and the U.S. current account reached balance in 1991.

I estimate aggregate import and export elasticities using data on goods imports excluding oil and goods exports from the U.S. Census Bureau and the U.S. International Trade Commission.  These are deflated using import and export price data obtained from the U.S. Bureau of Labor Statistics.  Following the imperfect substitutes model, imports are assumed to depend on the real exchange rate and GDP in the U.S. and exports on the real exchange rate and GDP in the rest of the world.  Data on the broad consumer price index deflated real effective exchange rate are obtained from the Bank for International Settlements and data on U.S. GDP from the OECD.  Data on GDP in the rest of the world are calculated as a geometrically weighted average of GDP in 15 leading trading partners, where the GDP data come again from the OECD.   The model is estimated using DOLS and data extending from 1994Q1 to 2019Q4.  Four lags and two leads of the first differenced right-hand side variables, quarterly dummies, a time trend, and dummies for the Global Financial Crisis are also included in the model.

The resulting import function is:

The corresponding results for exports are:

The Marshall–Lerner condition states that, beginning from balanced trade, a currency depreciation will improve a country’s trade balance if the sum of the absolute values of the export and import elasticities exceeds one.  The price elasticities in equations (1) and (2) just meet this condition.  This suggests that a dollar depreciation would help to improve the trade balance

Between 2000 and 2021, the U.S. current account deficit averaged 3.4% of U.S. GDP.  So far the rest of the world has been willing to finance these U.S. deficits.  If the rest of the world grows unwilling to continue accumulating U.S. assets on this scale, the dollar will depreciate.  The results above indicate that the depreciation will help to improve the trade balance.  However, the price elasticities are not large.  This implies that a depreciation alone will not be enough to rebalance trade. This would force some of the adjustment to come through a fall in U.S. GDP.  Such an adjustment would prove painful for U.S. workers, consumers, and firms.