Reader Steve Kopits doubts the veracity of the current reading on Chinese GDP growth. He writes:

The oil stats say China’s growth has been decelerating for a year, and current GDP growth is in the 0-3% range. Is there another historical example of a major GDP driver like China growing at 7.5% and the currencies of its major vendors collapsing? Do we really believe China’s 7.5% reported GDP growth? In volume terms, that would be as much as 10% GDP growth in 2005. And in 2005 there were all sorts of stories in the press about China’s booming energy sector, housing, manufacturing, luxury goods, exports, infrastructure, etc. Most of what I read about China lately is air pollution, ghost cities and South China Sea tensions. [Are we] sure this economy is growing at 7.5%?

Well, I cannot claim to be an expert on Chinese national accounts, although I know enough to say the level is probably off, and that the composition is probably mis-measured. But I am not sure the mis-measurement is any greater than it was in earlier times, so I am dubious q/q annualized real GDP growth is in the 0-3% range. Here is some data and econometric evidence to buttress my assertion.

First consider what is the reported q/q real GDP growth (non-annualized in the figure below):

Now, what about the indicators like electricity that we referred to in the 1990’s? 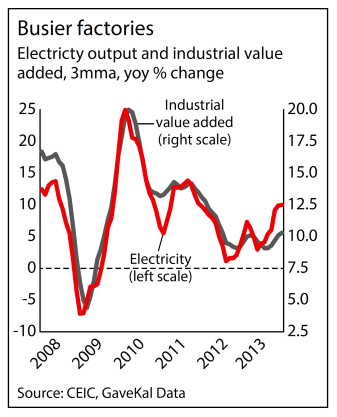 Trends in these indicators are not consistent with a near zero growth. China economy watchers typically look at a variety of indicators now. One popular summary measure is the Li Keqiang indicator (thus coined when he was the vice premier), which is a composite of electricity production, rail cargo shipments, and loan disbursements. Here the evidence also seems counter to the argument of 0-3% growth. 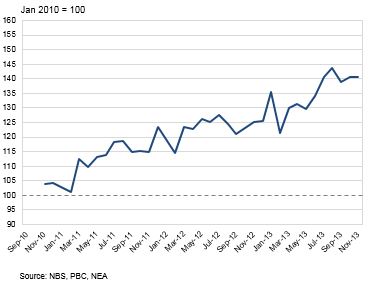 PMI’s throught 2013 indicated continued growth, although the first reading for 2014 indicated a possible contraction in industry output (the Markit/HSBC measure indicated contraction while the market expectation of official measure is just above 50). [1], [2].

Now it’s possible that the relationship between the Le Keqiang indicator and GDP has broken down. However, John Fernald, Israel Malkin, and Mark Spiegel, economists at the San Francisco Fed, have recently assessed this proposition in “On the Reliability of Chinese Output Figures” (March 2013). They concluded:

…the 2012 reported output and industrial production figures are consistent both with alternative Chinese indicators of the country’s economic activity, such as electricity production, and trade volume measures reported by non-Chinese sources. These alternative domestic and foreign sources provide no evidence that China’s economic growth was slower than official data indicate.

The figure below highlights this relative stability in the relationship. 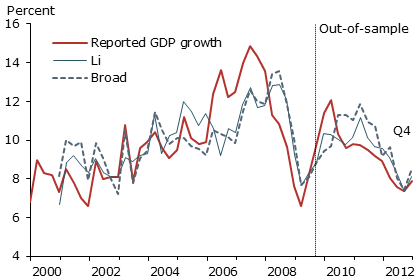 The authors also assess the correlation with a broad index which includes an index of consumer sentiment, construction of new floor space, an index of raw materials usage, air passenger volume, and the nominal value of new residential real estate construction.

So we have some confidence that through 2013 growth continued. Now, it is conceivable that q/q output growth in the first quarter of 2014 could drop to 0-3% (annualized). It’s important to remember, however, that the manufacturing PMI applies to only part of the Chinese economy; the weighted average of the manufacturing and non-manufacturing PMI is still above 53, so forward looking indicators (which can be wrong) still point to expansion.

For more on Chinese GDP, and why we expect — and want — some slow down in growth, see here. 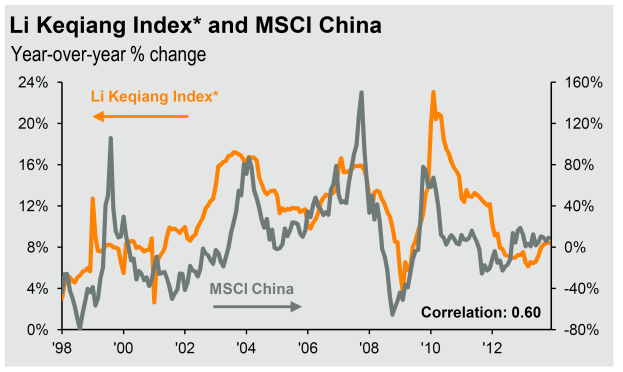 25 thoughts on “The Reliability of Chinese GDP, Again”